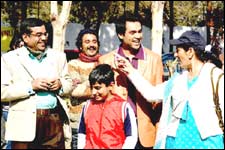 Deepa Garimella / fullhyd.com
EDITOR RATING
4.0
Performances
Script
Music/Soundtrack
Visuals
9.0
6.0
8.0
7.0
Suggestions
Can watch again
No
Good for kids
Yes
Good for dates
Yes
Wait for OTT
Yes
No abusive father, no destitute childhood, no blind mother, and no raped sister - are the elements that generally add up to a respectable job, especially in Bollywood. Not in Lucky-land, they do not. In Bollywood, such circumstances have never ever existed for a person who steals for a living. However, this is not regular Bollywood, but a fictional story apparently inspired by real events. While in films the final joke's always on those on the wrong side of the law, in real life, many times, the joke's on the rest of us - even those of us who've locked our cars.

So rich people, beware. In Lucky-land, your neighborhood thief gets tips on how to outwit your ferocious (ferocious? think again) guard dog; how to get past that security guard you pay Rs. 7,000 a month to the agency for, so he (the thief) can pick up your TV set; how to steal your daughter's music system right in front of her eyes; and how to drive away at least one guest's 'Mercidi' from your son's wedding. He steals from the rich, andâ€¦ err, that's about it. He doesn't sell, he doesn't give to the poor. Go figure.

If skimpy morals - with neither root, nor redemption, nor compensation (a la Munnabhai) - do not threaten you, or make you squirm, and if they do not make you wonder what in the name of 'offbeat comedy' a criminal is being made out to be a hero for, then watch Oye Lucky Lucky Oye and have fun.

Lucky is the aide of a B-grade stage performer (Paresh Rawal, in one of his roles in the film), who he steals from the opulent for. And so, we have Delhi's well-off families, slightly uncomfortably up close and personal - with all their morning jogs, money-mindedness and their 'importexport' fixation. An unnervingly saucy Lucky moves around posh localities and picks up anything that once had a price tag exceeding Rs. 500. Of course, being well-dimpled, well-shaven, well-spoken, well-heeled and all helps a conman immensely. Add to that, well-brained. With brains like that, he ought to be Union Home Minister (especially now), not Skoda-snooping in Lajpat Nagar.

He gets a very nice and simple girlfriend (Neetu Chandra), with whose family he is a regular now. When a vet (Rawal, again) and his wife (a brilliant Archana Puran Singh) befriend Lucky, life isn't the same for him again. Oh, at least for a while. And predictably, where there is money, there is deceit, and Lucky too faces some.

Oye Lucky Lucky Oye could have been a fine film, but for its lack of purpose, and the zero depth to Lucky's character. The film's beginning, that shows adolescent Lucky's easy battles with life and his honest middle-class father (Paresh Rawal - No. 1), has no point, except to show his initial trysts with Klepton and Fib-city. Then, there are quite a few incomprehensible plot twists in the film.

It seems like a great package - tongue-in-cheek humour, slick visuals, innovative story, superb performances, and a vibrant soundtrack - but whether it is its moral indifference, or the absence of closure, or just plainly, the absence of real issues anywhere, the film is not an extremely comfortable watch.

But actually, grope a bit, and the morals are there. Everyone has his fingers in Lucky's wallet. His girlfriend's house is refurbished with his skillfully acquired consumables, a press reporter wants a washing machine from him, and the goofy, bumbling police - don't even ask. So whose fault is it that the law isn't catching up with him? What law?

The happy-to-experiment-with-anything Abhay Deol is super-cool, and has to be truly lauded for his choice of roles. He does not face the pressures of having a fan-following of the nature of that of the regular goon-bashing Deol, and thus, he gets away with glamourizing the thief. Besides him, Paresh Rawal and Manu Rishi have major presences, and we get to see the former, thrice over. All the other actors, too, are awesome. The vigorous Bhangra tracks are a huge accessory - it's quite an effort to stop yourself from breaking into a dance in the theatre.

It doesn't hurt to watch this one, provided you watch it as though it were a funny crime show on some news channel. Oye Lucky... might sway you either way, but if you sway the way we hope you will, next time, you'll lock your windows and keep your wits about you.
Share. Save. Connect.
Tweet
OYE LUCKY! LUCKY OYE! SNAPSHOT

RATING
6
MQ on 27th Dec 2008, 9:25am | Permalink
This one is slick and wanted to be very smart, but it's just a sequence of heists over and over again...i mean how many times is it funny to watch this guy just go on stealing? And the Punjabified Hindi makes it pretty tough to follow sometimes.

ADVERTISEMENT
This page was tagged for
Oye Lucky! Lucky Oye! hindi movie
Oye Lucky! Lucky Oye! reviews
release date
Abhay Deol, Paresh Rawal
theatres list
Follow @fullhyderabad
Follow fullhyd.com on
About Hyderabad
The Hyderabad Community
Improve fullhyd.com
More
Our Other Local Guides
Our other sites
© Copyright 1999-2009 LRR Technologies (Hyderabad), Pvt Ltd. All rights reserved. fullhyd, fullhyderabad, Welcome To The Neighbourhood are trademarks of LRR Technologies (Hyderabad) Pvt Ltd. The textual, graphic, audio and audiovisual material in this site is protected by copyright law. You may not copy, distribute, or use this material except as necessary for your personal, non-commercial use. Any trademarks are the properties of their respective owners. More on Hyderabad, India. Jobs in Hyderabad.