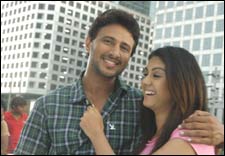 Deepa Garimella / fullhyd.com
EDITOR RATING
4.0
Performances
Script
Music/Soundtrack
Visuals
6.0
4.0
3.0
7.0
Suggestions
Can watch again
No
Good for kids
Yes
Good for dates
No
Wait for OTT
Yes
What's tall, broad, looks like Chiru, broods, has wheels, and is in dire need of a decent script? Nagababu. Okay, we lied about the wheels.

For all those histrionics and the booming voice, the man gets a very raw deal in Tollywood. Andamaina Abaddham is a few notches higher than the braindead fare he's lately been a part of, but only a few. He's not fighting goons and mouthing inane dialogues about justice. He's just mouthing inane dialogues about how much he does not believe in love.

Vaishnavi (Kamna) is cavorting in Bangkok with her boyfriend, Pradeep (Raja), and is spotted by her father's friend, Naidu (Naresh), who promptly informs her father Raghuram (Nagababu), a love-hater. The couple set out to win his heart, and use methods you'd not have tried if you wanted to win your 2nd class teacher's heart when you were caught having lunch in Maths period. Pradeep sends him a pic of a random friend, Shyam (Ali), whose bones keep getting broken at regular intervals throughout the film, because Raghuram has set some goons onto him. Try and laugh the 4th time he lands in hospital.

Post arriving in Hyderabad, Pradeep tries and gets into Raghuram's good books, which brings both their families so close to one another, everyone's having coffee in each other's pockets and having sleepover parties. Vaishnavi then tries to confront her father about Shyam, and things reach the level of father willing to let daughter immolate herself.

Pradeep tells all to his family, but having an adult discussion with Raghuram about love is out of the question, so Pradeep's family decides to keep up with the act, and ask for Vaishnavi's hand in marriage to Pradeep, to which there is general assent. Sounds like a very shady way to get your dad agree to your boyfriend, but no one in the movie has realized that as yet.

When Naidu walks in, Vaishnavi's reflex is to hide Pradeep in the balcony, and Pradeep's is to jump down into the safety of the neighbour's garden. However, the couple take a wise and significant step - they set him (Naidu) up as a mad man.

How will Naidu deal with this? What's next in Pradeep's plan? Who on earth told Naresh that his hamming is making those false buck teeth look funny? The rest of the story was bought at a discount climax shop for Rs. 50, and got stitched into this turkey for Rs. 5. Technically it would be a spoiler to reveal the climax here, but we'll just say that it's a much bigger letdown to actually watch it unfold on screen. Seriously, if you're looking for the keywords 'story', 'climax' or 'sense', Andamaina Abaddam is not the syllabus.

Kamna is pretty, and both she and Raja are good. Ali is funny, as usual. The film centres around Nagababu - he does stand out, actually. The movie is mostly set in brightly lit, warm and colourful indoors, with a minimum of a dozen people around at any given time. It seems like it's aimed at families, but no one's likely to buy this dull story.

And the 'music' has been 'composed' by a lazy 'composer', who has either put in rap-like recitals of lyrics, or has blatantly copied tunes from everywhere and hasn't even bothered to cover up her work.

Andamaina Abaddham is not worth your time, and you would do well to catch up with the better releases of the season.
Share. Save. Connect.
Tweet
ANDAMAINA ABADDHAM SNAPSHOT

ADVERTISEMENT
This page was tagged for
Andamaina Abaddham telugu movie
Andamaina Abaddham reviews
release date
Raja, Kamna Jethmalani
theatres list
Follow @fullhyderabad
Follow fullhyd.com on
About Hyderabad
The Hyderabad Community
Improve fullhyd.com
More
Our Other Local Guides
Our other sites
© Copyright 1999-2009 LRR Technologies (Hyderabad), Pvt Ltd. All rights reserved. fullhyd, fullhyderabad, Welcome To The Neighbourhood are trademarks of LRR Technologies (Hyderabad) Pvt Ltd. The textual, graphic, audio and audiovisual material in this site is protected by copyright law. You may not copy, distribute, or use this material except as necessary for your personal, non-commercial use. Any trademarks are the properties of their respective owners. More on Hyderabad, India. Jobs in Hyderabad.