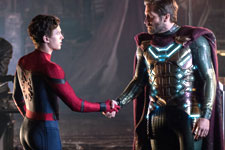 Punarvasu Pendse / fullhyd.com
EDITOR RATING
8.0
Performances
Script
Music/Soundtrack
Visuals
8.0
8.0
8.0
9.0
Suggestions
Can watch again
Yes
Good for kids
Yes
Good for dates
Yes
Wait to rent it
No
If Spider-Man: Homecoming was Peter Parker trying to become an adult, Spider-Man: Far From Home is his attempt at becoming a high school kid again. And while it is not as goofy as the previous film, it is undeniably more action-packed.

Post the quasi-apocalyptic events of the Endgame, Spider-Man (Tom Holland) is a bona fide Avenger despite hanging on to his secret identity. Upon being contacted by Nick Fury (Samuel L Jackson) for a mission, Parker successfully manages to ghost him in order to join his friends on a school trip to Europe. It is clear from the onset that Peter Parker needed a break after being untimely thrust into the chaos that is being an Avenger. Besides, the trip is also an opportunity for Peter to get closer to MJ (Zendaya).

Now in Italy, Spider-Man has to join forces with Quentin Beck (Jake Gyllenhaal), a mysterious superhero from an alternate dimension who goes by the name Mysterio, to combat with an elemental threat that had devastated Mysterio's earth. Parker looks up to Beck to fill the void in his life left by the passing of Tony Stark, seeing as Harold 'Happy' Hogan (Jon Favreau) is content to flirt with his aunt May (Marisa Tomei). Most people who have some idea of Spider-Man's shenanigans would be able to piece together the mayhem that follows.

If you had any doubts about how Marvel would deal with the universe-changing effects of Avengers: Endgame, you can rest assured that it has been executed with poise, while maintaining the film's overall tone. For instance, Spider-Man's internal conflict about replacing Iron Man is earnestly explored; but at the same time some high schoolers growing five years older than their peers who were "blipped" by Thanos' actions is treated hilariously. The same levity that made Homecoming so much fun to watch is intact, and at times, magnified.

The aforementioned humour means the movie could be a teenage high school romantic comedy with the superhero stuff kept aside, and would still click with a lot of the audience. But, just like it did in the previous Spider-Man movie, Marvel has once again managed to weave the two parts of its lead character's life together perfectly - with both Spider-Man's and Peter Parker's arcs intersecting efficiently to create one cohesive narrative. As an added bonus, the villain's motives are much clearer this time around.

It was always going to be hard to follow up after the explosive finale of Endgame, so my issues with Spider-Man: Far From Home may seem harsh, but the highest stakes of the film also end up feeling a tad underwhelming. The intense, perfectly choreographed action sequences seem like a visual overload, especially when viewed in 3D (that is not to say we didn't enjoy them, because Marvel rarely puts a foot wrong in the CGI department).

Jake Gyllenhaal is the one new face in this franchise, and boy does it all revolve around his Mysterio. Gyllenhaal seems to have had a blast playing the master of guile, with his portrayal of both the benevolent and the unhinged equal fun to watch. We have a little less bonhomie, but a lot more silly teenage romance (Tom Holland doesn't have as much screen time with Jacob Batalon as we had hoped, this time around, but there are multiple romantic pairings who have their own humour).

Zendaya's deadpan, street-smart MJ, and goofy, awkward Peter seem like they are straight out of a teenage romantic comedy, but the more memorable parallel relationship is that between Batalon's Ned and Betty (Angourie Rice) - cloyingly sweet, at times cringe-inducing, nevertheless very, very funny. Jon Favreau's Happy and Marisa Tomei's Aunt May are not given enough time together, but there are a couple of hilarious moments fueled by that flirtation.

Michael Giacchino returns as the music director from Spider-Man: Homecoming, and his score is every bit as memorable as it was there. The use of Whitney Houston's "I Will Always Love You" in a gag sequence in the beginning to Marvel staples like AC/DC's "Back In Black" sees him combine classic hits with European pop music to create a soundtrack that definitely stays on your mind.

Iron Man might be the original crowd-puller, but that was in part due to Robert Downey Jr. making the character larger-than-life with his own charm. Looking only at scripts, Spider-Man has the greatest ability to connect with the audiences. And connect you will, especially on the big screen.

Oh, and the post-credits scene raises hell the way no other Marvel movie has before.
Share. Save. Connect.
Tweet
SPIDER-MAN: FAR FROM HOME SNAPSHOT 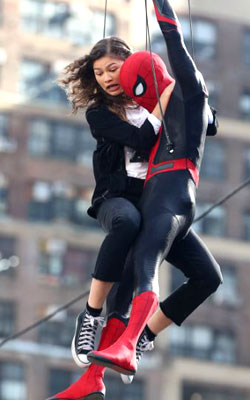 ADVERTISEMENT
This page was tagged for
Spider-Man: Far From Home english movie
Spider-Man: Far From Home reviews
release date
Tom Holland, Zendaya
theatres list
Follow @fullhyderabad
Follow fullhyd.com on
About Hyderabad
The Hyderabad Community
Improve fullhyd.com
More
Our Other Local Guides
Our other sites
© Copyright 1999-2009 LRR Technologies (Hyderabad), Pvt Ltd. All rights reserved. fullhyd, fullhyderabad, Welcome To The Neighbourhood are trademarks of LRR Technologies (Hyderabad) Pvt Ltd. The textual, graphic, audio and audiovisual material in this site is protected by copyright law. You may not copy, distribute, or use this material except as necessary for your personal, non-commercial use. Any trademarks are the properties of their respective owners. More on Hyderabad, India. Jobs in Hyderabad.