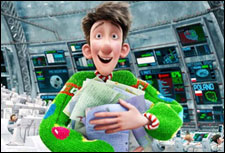 Nupur Barua / fullhyd.com
EDITOR RATING
7.5
Performances
Script
Music/Soundtrack
Visuals
8.0
7.0
7.0
9.0
Suggestions
Can watch again
Yes
Good for kids
Yes
Good for dates
Yes
Wait to rent it
No
Does Santa Claus exist? Does he live in the North Pole? And does he have elves? Yes, to all. And if you do not buy this hocus-pocus, you may want to check out Arthur Christmas, which not only reinforces all your childhood beliefs (and those of your children), but also silences non-believers.

The movie begins with questions that a young girl, Gwen (Ramona Marquez), representative of kids today, sceptically asks in her letter to Santa. While she stresses that she believes in his existence (why else would she write the letter?), she cannot wrap her little head around the fact that he can climb in and out of chimneys around the world, and manage to leave a present for every child in the world, just in time for Christmas morning, what with the exploding population.

The person in charge of correspondence in the North Pole is Arthur (James McAvoy), the present Santa's younger son. He writes back to Gwen (although he never posts it), telling her to believe in the most wonderful person in the world, and his magic. Arthur is all butterfingers and toes, and more of a hindrance to the elves than any help.

Turns out things have changed over the years, and Christmas cheer is no longer about Rudolph and his red nose. With the increased security in airspace and the increasing number of children, Santa's elder son, Steve (Hugh Laurie), the natural successor to the post of Santa, has upgraded the way operations run in the Santa factory. Malcolm Santa (Jim Broadbent) has his own stealth aircraft, and his elves are divided into highly efficient ground and field crews.

Steve's methods have a 0.00000000001% chance of error, but because of a minor glitch, one present falls off the conveyor belt. The 136-year-old Gransanta (Bill Nighy), who wants to prove to his son and elder grandson that technology is not the future, cashes in on Arthur's distress over this incident, and offers to take Eve, the famous sleigh, on an emergency run to deliver the present.

What follows is a predictable misadventure, with both of them racing against time and facing their fair share of hurdles.

The voice cast of Arthur Christmas is spectacular. A word of warning, though - James McAvoy may have a dreamy voice in his real world, but, as Arthur, he speaks with a high pitch. That does not take away the charm, though, as he "Oh"s and "Ah"s through sticky situations.

Arthur is a nice guy, and who better to play him (rather, his voice) than the young McAvoy?

Bill Nighy, as the grandparent, is apt casting. In fact, Bill Nighy as anything old and decaying is wonderful (think Dead Man's Chest and the Underworld series). Gransanta is not exactly the sweet grandfather, and Nighy portrays his eccentricities well.

All the actors do their job with suitable dedication and professionalism, but Laura Linney as the computer is the best of them all. Whoever thought of that is a genius. And the Indian elf is voiced by Sanjeev Bhaskar.

The animation itself is superior, and watching snowflakes and clouds in 3D is a fascinating experience. The story lends itself to technology, even as it talks about the usefulness of old, seemingly redundant, practices that have been discarded with the advent of modernisation.

The music, with all the sprinkle sounds and carols, adds to the spirit of the story. Watch out for the James Bond music during the mission of the elves on Christmas Eve.

Arthur Christmas is a belated Christmas gift this winter. It emphasises what Yuletide should be all about - caring and giving. In an increasingly materialistic world, the movie dares to believe that selflessness is the salvation of mankind. It is also a film that every kid must watch with his or her parents, just for the fun of it.
Share. Save. Connect.
Tweet
ARTHUR CHRISTMAS (3D) SNAPSHOT

ADVERTISEMENT
This page was tagged for
Arthur Christmas (3D) english movie
Arthur Christmas (3D) reviews
release date
James McAvoy, Hugh Laurie
theatres list
Follow @fullhyderabad
Follow fullhyd.com on
About Hyderabad
The Hyderabad Community
Improve fullhyd.com
More
Our Other Local Guides
Our other sites
© Copyright 1999-2009 LRR Technologies (Hyderabad), Pvt Ltd. All rights reserved. fullhyd, fullhyderabad, Welcome To The Neighbourhood are trademarks of LRR Technologies (Hyderabad) Pvt Ltd. The textual, graphic, audio and audiovisual material in this site is protected by copyright law. You may not copy, distribute, or use this material except as necessary for your personal, non-commercial use. Any trademarks are the properties of their respective owners. More on Hyderabad, India. Jobs in Hyderabad.