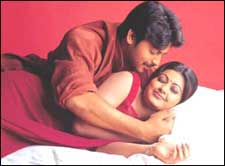 Deepa Menon / fullhyd.com
EDITOR RATING
1.0
Performances
Script
Music/Soundtrack
Visuals
NA
NA
NA
NA
Suggestions
Can watch again
NA
Good for kids
NA
Good for dates
NA
Wait to rent it
NA
This movie has many messages for the youth of today, chief among which is: to smoke is very cool, not to mention 'manly'. The hero alone could give an industrial chimney a serious inferiority complex. By the interval, you feel like you've passive-smoked about 10 fags, although that's not the only reason you're nauseated.

Dubbed from the Tamil version, April Madhathil, Vaaliddaru is about two people who love each other deeply but take great pleasure in annoying you by beating around the bush about it endlesly.

Karthik (Sriram) is an earnest, upright young man who, when he finds himself strapped for cash, goes begging at a girls' college. This is, apparently, a most profitable way of raising money. And not only does he make out like a bandit, he also gets a scantily-clad Nirmala to fall madly for him. Karthik, however, is untouched and politely tells her to buzz off.

At his new college, though, Karthik also falls in love. But before he meets Shwetha (Sneha) he performs a 'mass item number' which is repeated throughout the film and goes something like this: Lifebouy ichchedi arogyame, playboy aiyyedi collegelo ne. This is accompanied, in proud campus tradition, by frantic and totally random pelvic thrusts.

Shwetha and Karthik meet everyday under a special tree, where they proceed to bore the crap out of you. They chatter about everything and are sometimes joined by their friends, who are either swigging beer or blubbering about how they can't live without each other. This is alternated with comedy sequences of the fantastically vulgar kind by a guy called Cycle Jackson, who single-handedly makes the rest of the film look classy.

Soon Shwetha and Karthik start having 'feelings' for each other, and thus begins a unending game of he-loves-me-he-loves-me-not. About two million complications are thrown in and every character gets to cry at least once, including members of the audience.

Finally Shwetha's wedding is fixed with someone else, and only at the reception does the Karthik realise how much he loves her. But now it's too late. Not for him (luckily, the reception was being held before the wedding). But for you, who just sat through the entire three hours of Vaaliddaru when you could have earned that splitting headache just buying the soundtrack.
Share. Save. Connect.
Tweet
VAALLIDDARU SNAPSHOT

ADVERTISEMENT
This page was tagged for
Vaalliddaru telugu movie
Vaalliddaru reviews
release date
Sriram, Sneha
theatres list
Follow @fullhyderabad
Follow fullhyd.com on
About Hyderabad
The Hyderabad Community
Improve fullhyd.com
More
Our Other Local Guides
Our other sites
© Copyright 1999-2009 LRR Technologies (Hyderabad), Pvt Ltd. All rights reserved. fullhyd, fullhyderabad, Welcome To The Neighbourhood are trademarks of LRR Technologies (Hyderabad) Pvt Ltd. The textual, graphic, audio and audiovisual material in this site is protected by copyright law. You may not copy, distribute, or use this material except as necessary for your personal, non-commercial use. Any trademarks are the properties of their respective owners. More on Hyderabad, India. Jobs in Hyderabad.