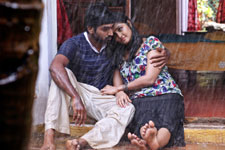 Kritika Deval / fullhyd.com
EDITOR RATING
7.0
Performances
Script
Music/Soundtrack
Visuals
6.0
7.5
8.0
8.5
Suggestions
Can watch again
Yes
Good for kids
No
Good for dates
Yes
Wait to rent it
No
Oh, there's nothing like being handed your low expectations back right back to you in slice after slice after delicious, exciting and beautiful looking slice of pizza, for this is the kind of film that grabs said expectations by the crack and then goes on to beat the crap out of them (hehe).

In a world of thrillers that don't quite thrill, this Telugu-dubbed-Tamil film is an audacious delight that rides almost entirely on the shoulders of its debutant director Karthik Subbaraj.

Beginning as it does at a pizza place, with the very ordinary tale of a pizza delivery boy called Michael (Vijay Sethupathi) and his live-in girlfriend Anu (Remya Nambeeshan), Pizza doesn't quite grip you from the word go. In fact, its impact only makes itself felt a coupla paragraphs later.

For all of this raving to make sense, we'll have to tell you a little more about the plot. So, anyway, Michael and Anu live together in the outhouse of a building. Michael makes a living delivering pizzas, and Anu, well, Anu does nothing as far as we could see. Meanwhile, Micheal's rather shifty boss Shanmugan (Naren) is in another mess entirely.

So, now we have a ghost, the couple, a shifty boss, and few other pointers here and there in the form of dhongi babas, mysterious little assignments etc.; and the stage is set for what anyone would be forgiven for thinking is a "horror" movie you've seen a hundred times.

Pizza is not so forgiving. This little tease of a movie will take you to the brink of enlightenment, and then yell "Boo Ya!" as it then pushes you in another direction altogether, and it will do it again and again. (Dumb, dumb audiences. They never learn, do they? - we can almost hear Subbaraj think snidely to himself)

Vijay and Remya are wonderful actors who walk hand in hand with the director to fulfill his vision. The rest of the performances, while not exactly brilliant, have been directed wonderfully.

The second half of the film is almost entirely propelled by the brilliantly crafted screenplay.

Then, there is the technical front. Some of the most brilliant filmmakers we have today work as they do because they understand the potential of the camera. Bejoy Nambiar, Anurag Kashyap, and, closer home, Chandrashekhar Yeleti, and others, get that the camera is a living, breathing entity that can be the hand of the director as he leads the audiences through the portal to his mind.

And Subbaraj is no different. The music, the lighting, the editing, the sets - all of these, he wields with an assured chuztpah that'll leave you absolutely exhilarated as you leave the movie hall.

Finally, we have a "thriller" that actually thrills, till the very end. Hop on. This is a ride you won't be forgetting in a hurry.

P. S. We can't help but wonder that most of the movie wouldn't have happened at all if Michael had realised that glass can be broken. 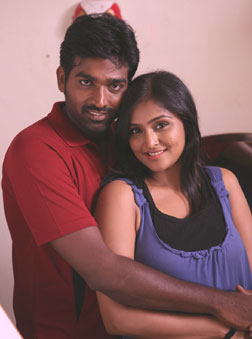 ADVERTISEMENT
This page was tagged for
Pizza telugu movie
Pizza reviews
release date
Vijay Sethupathi, Remya Nambeeshan
theatres list
Follow @fullhyderabad
Follow fullhyd.com on
About Hyderabad
The Hyderabad Community
Improve fullhyd.com
More
Our Other Local Guides
Our other sites
© Copyright 1999-2009 LRR Technologies (Hyderabad), Pvt Ltd. All rights reserved. fullhyd, fullhyderabad, Welcome To The Neighbourhood are trademarks of LRR Technologies (Hyderabad) Pvt Ltd. The textual, graphic, audio and audiovisual material in this site is protected by copyright law. You may not copy, distribute, or use this material except as necessary for your personal, non-commercial use. Any trademarks are the properties of their respective owners. More on Hyderabad, India. Jobs in Hyderabad.