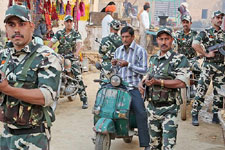 Nupur Barua / fullhyd.com
EDITOR RATING
6.0
Performances
Script
Music/Soundtrack
Visuals
7.0
5.0
6.0
7.0
Suggestions
Can watch again
No
Good for kids
No
Good for dates
Yes
Wait for OTT
No
Noticed how a satire is usually a comment on politics? And with the buzz still alive over the recent elections and the constant media obsession with the Prime Minister of India, a movie like Zed Plus was inevitable. That Dr. Chandraprakash Dwivedi (of Chanakya - the television series - fame) is directing this makes it the perfect excuse for film buffs to run to theatres. Is it worth it? Maybe, but the story first.

Aslam (Adil Hussain) lives in the fictitious town of Fatehpur in Rajasthan. This little settlement houses a very popular dargah, and devotees come here from far and wide. Aslam is the puncture expert, a mechanic. His surname is Puncturewala, and it is a specialised job. When visitors have tyre problems with their vehicles, Aslam is the go-to man.

He has a wife (Mona Singh), who is a footwear seller, and a son. He also has a mistress (Shivani Tanksale), and life is good. His old friend and neighbour (Mukesh Tiwari) is now his foe - a silly fight. The sleepy town does not have more than the mandatory connection with the outside world. So when the Prime Minister (Khulbhushan Kharbanda) visits the town, they are a little under-awed, although respectful.

The Prime Minister has had a tough time recently with his government. His trusted advisor (K K Raina) advises him to visit the dargah at Fatehpur. He does, with an entourage. Miraculously, the PM's problems seem to disappear as he steps into the holy place, and that puts him in a very good mood. He chats up the person helping out at the dargah, and that just happens to be Aslam. The puncture guy, given his limited knowledge on external matters, tells the big man all about his problems with his neighbour.

What Aslam does not know, since it is not common knowledge, is that the Prime Minister is not very proficient in Hindi. Aslam's words are misunderstood, and the Prime Minister thinks that the tyre mechanic has been threatened by the neighbouring country. He immediately orders for Z-Plus security for Aslam, throwing the small town into chaos, not to mention Aslam's personal life. To top it all, there is an enemy terrorist group that is trying to enter India illegally, and the leader (Sanjay Mishra) thinks he should reconsider his plan of action.

As a story, this is fun. The comedy of errors and the consequent pandemonium is enough to keep you in splits, or at least in grins. The plot points become more and more surreal as all the players struggle to retain their sanity. What is not effective, however, is the humour. At times, it goes so over the top that you sit back and say "Enough!", hoping that the story comes back to its original wit instead of the forced slapstick. The willing suspension of disbelief (yours) is an important device to be conscious of all the time, because the obvious flaws in screenplay sometimes make you cynical.

If this is a comment on society and power games, it is also a statement on the monotony of small towns and the moral standards that sometimes border on hypocrisy. For example, the extra-marital affair, if it is meant to be funny, makes you stop short of admiring Aslam as a hero. You begin to think that maybe he deserves the disruption in his life, given that he has done things that are not exactly praiseworthy. The screenplay also highlights the pettiness that leads to squabbles.

The most interesting and the most distracting elements in the movie are the same - the characters. Sometimes, they are so real that you immediately identify with their plight and their situation, and at other times, they become erratic and unpredictable, leaving you with a bad taste in your mouth (if you are rooting for one of them). They find themselves in self-imposed problematic situations, and after a point, you lose interest in their whining and self-pity. The resolution, when it happens, is a bit anti-climactic, and leaves you feeling somewhat disappointed.

Adil Hussain is the exact opposite of the suave husband in English Vinglish, and he plays this with aplomb. He carries the movie on his shoulders, but the strain begins to show towards the end of the film, when he turns slightly mechanical. Mona Singh is effective as the wife, but seems too urban to convincingly play a small-town woman devoted to her husband no matter what his faults.

The surprise element is Khulbhushan Kharbanda, reminding us why he used to be the darling of the directors of movies that made a difference. The supporting cast, including K K Raina, Sanjay Mishra and Mukesh Tiwari, are apt for their roles. Mishra has the added responsibility of keeping the audiences laughing, and he is successful.

The rustic feel of a small town in Rajasthan is reflected very well in the production design and the costumes. There is a slight hint of urban sensitivities, but it makes the visuals more aesthetic, and not stereotypical. The cinematography captures the moods of the people and of the overall environment very well. The movie is over two hours long, which is why it loses steam towards the end. The item song that features Hrishita Bhatt is unexpected, and somewhat too mainstream for Dr. Dwivedi's otherwise kneejerk-reaction film.

Zed Plus is not a great movie, and not even good enough to make you want to watch it more than once, but if you decide to skip it, you are losing out on a good thing. If you are a true film buff, then there is no way you are not buying a ticket to a screening of this one.
Share. Save. Connect.
Tweet
ZED PLUS SNAPSHOT 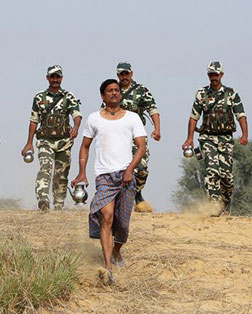 ADVERTISEMENT
This page was tagged for
Zed Plus hindi movie
Zed Plus reviews
release date
Adil Hussain, Mona Singh
theatres list
Follow @fullhyderabad
Follow fullhyd.com on
About Hyderabad
The Hyderabad Community
Improve fullhyd.com
More
Our Other Local Guides
Our other sites
© Copyright 1999-2009 LRR Technologies (Hyderabad), Pvt Ltd. All rights reserved. fullhyd, fullhyderabad, Welcome To The Neighbourhood are trademarks of LRR Technologies (Hyderabad) Pvt Ltd. The textual, graphic, audio and audiovisual material in this site is protected by copyright law. You may not copy, distribute, or use this material except as necessary for your personal, non-commercial use. Any trademarks are the properties of their respective owners. More on Hyderabad, India. Jobs in Hyderabad.