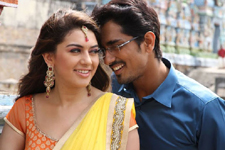 Deepa Garimella / fullhyd.com
EDITOR RATING
5.5
Performances
Script
Music/Soundtrack
Visuals
7.0
5.0
6.0
7.0
Suggestions
Can watch again
No
Good for kids
No
Good for dates
Yes
Wait to rent it
Yes
The line between courtship and harassment is out there, painted in bright, glow-in-the-dark flourescence. But our film makers, like a bunch of sufficiently bribed traffic cops, like to look the other way. As a result, movies end up showing how a man with no redeeming features stalks his object of affection, harasses her, lies to her, completely disrespects her right to say no, until she relents and "falls in love" with him (read: starts wearing salwar kameez).

Something Something, a slice-of-life, tongue-in-cheek comedy of errors, portrays a young boy-next-door trying underhand tactics to land his girl. It could have been an excellent satire on everything that is wrong with filmi romances, telling people that life is not a Ravi Teja movie. But we were wrong. All it does is make you worry about what kinds of youngsters inhabit our cities today, and wonder why the imbecile human race hasn't clobbered itself into blissful extinction yet.

The film is actually fun for a long, long time. Kumar (Siddharth) is a shy, timid, gawky, introverted software professional who is awkward with women, and doesn't want to have anything to do with them. A brief, funny back-story tells us why - he has always suffered rejection at the hands of the fairer sex.

Things change when a hot girl, Sanjana (Hansika), joins his office. The woman-starved males in the office fall over one another trying to welcome the lady, who makes a graceful, respect-worthy entry on her first day of work by showing cleavage.

Sanjana is so out of Kumar's league that it is not a joke. He seeks the help of famed love guru Premji (Brahmanandam), who actually drives the whole film by "coaching" him on various methods to land a girl, ranging from cheap phone-number-procuring gimmicks to public molestation.

Something Something is a dubbed film, with the parts with Brahmanandam having been actually re-shot in Telugu. So be prepared for awful lip-sync, and a l-e-e-t-l-e bit of Tamil nativity (yes, urban rom-coms come with a flavour, too).

The movie works wonderfully before it takes its interval break. Clever situational comedy, and well-written lines peppered with quips on men, women and relationships, keep the film fun and vibrant for the most part. There's comedy, but there's also nuance, as Kumar goes from one shameless trick in the book to another.

But then, they stretch it, and the plot hangs loose like an an overused clothesline. Premji becomes the soul of the movie, but then, he goes from harmless guru to vicious creep as you wonder when the bad guys will get their due.

The romance is basically a joke, since all Kumar has to do is make Sanjana and her boyfriend break up in order for her to like him back. At one point, when Sanjana gives Kumar a dressing down because she realizes that he's been hoodwinking her all this while, you root for the film. But in the next scene, she loves him again because - get this - he has an accident. So what happens to all the smart writing and the cleverness, and why this escapism?

Siddharth is amusing as the week-kneed nerd, but his act gets monotonous. Hansika is as pretty as they come, and acts well. The other actors are smooth, but Brahmanandam proves to be THE anchor of the film. Samantha's cameo, meanwhile, is rather cute. Also, Rana Daggubati appears as himself for half a minute.

The songs are, surprisingly, too mass-y. They're too loud and jarring, but the background music is pretty pleasant, and keeps with the comic tone of the movie. The visuals are slick, and the editing keeps the film feeling crisp.

On the whole, Something Something is a fun film that can be watched once if you crave entertainment without violence and sleaze. However, we'd have rooted harder for it if it were as brilliant as it could have actually been.
Share. Save. Connect.
Tweet
SOMETHING SOMETHING SNAPSHOT 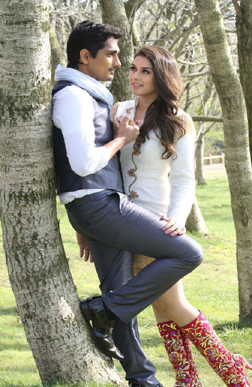 See Something Something full details
SOMETHING SOMETHING USER REVIEWS
1 - 6 OF 6 COMMENTS
POSITIVE  |  NEGATIVE |  NEWEST  |  OLDEST  |  MOST HELPFUL  |  LEAST HELPFUL
Jaideep on 17th Jun 2013, 12:44pm | Permalink
I am sure the review is far more entertaining than the actual movie.

Deepa, while some people might not get your sense of humor in the intended sense, I just love it! Keep the great reviews coming!!

I read the reviews for the reviews ... most often than not, have no intention of watching these movies :)
Deepa Garimella on 17th Jun 2013, 7:20pm | Permalink
Dear Jaideep,

Thank you very much! I hope to sustain your interest in our reviews :)

Cheers
Deepa
Asooryampasya on 21st Jun 2013, 11:58am | Permalink
Same with me. I read the reviews for the reviews. Most of the time, I can't watch the movies anyway!
Saradhi on 16th Jun 2013, 10:49pm | Permalink
When the makers wanted to remake gem of movie like "choti si baat" they would have done it in a proper way. Cheap comedy, mindless drama. Got really irritated with Brahmi and his cheap tricks. It would have been much better if they generate good comedy with positive attitude. God only can help Sidharth for selecting two badly executed scripts, "jabardasth" and "Something something". I really do not understand why this Hansika looks cute to reviewers. Everything is wrong with her face, body, dressing.
Sapthagiri on 15th Jun 2013, 11:25am | Permalink
Deepa garu, you cut at the right angle and at right measurements. Good review.
tharun on 15th Jun 2013, 7:40am | Permalink
"But our film makers, like a bunch of sufficiently bribed traffic cops, like to look the other way"
This is over the top. Stick to the film and you have no right to comment on other film makers in a particular film review
Varun on 15th Jun 2013, 2:29pm | Permalink
I agree...Deepa reviews fine but stereotypes too much...
Portuguese Man-of-War on 14th Jun 2013, 7:33pm | Permalink
Good review!
Deepa Garimella on 14th Jun 2013, 7:43pm | Permalink
Thank you!
uvrvijayasaradhi on 16th Jun 2013, 10:55pm | Permalink
In what sense did Hansika looked cute to you Deepa? Waste heroine. Artificial face expressions.
Hari on 14th Jun 2013, 6:49pm | Permalink
>>>>
(read: starts wearing salwar kameez)
>>>>

ADVERTISEMENT
This page was tagged for
Something Something telugu movie
Something Something reviews
release date
Siddharth, Hansika Motwani
theatres list
Follow @fullhyderabad
Follow fullhyd.com on
About Hyderabad
The Hyderabad Community
Improve fullhyd.com
More
Our Other Local Guides
Our other sites
© Copyright 1999-2009 LRR Technologies (Hyderabad), Pvt Ltd. All rights reserved. fullhyd, fullhyderabad, Welcome To The Neighbourhood are trademarks of LRR Technologies (Hyderabad) Pvt Ltd. The textual, graphic, audio and audiovisual material in this site is protected by copyright law. You may not copy, distribute, or use this material except as necessary for your personal, non-commercial use. Any trademarks are the properties of their respective owners. More on Hyderabad, India. Jobs in Hyderabad.