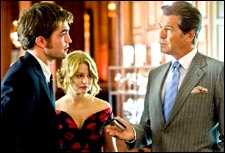 Samrat Sharma / fullhyd.com
EDITOR RATING
4.5
Performances
Script
Music/Soundtrack
Visuals
5.5
5.5
7.0
6.0
Suggestions
Can watch again
No
Good for kids
No
Good for dates
Yes
Wait to rent it
Yes
Despite the fact that Robert Pattinson's current turn as flavour of the year makes this fortuitous casting, I don't buy it. The entire film tries to make high school girls of us all, asking us to confuse his banal stares for something more profound, but the script and indeed the actor give us no indication that that is the case. Remember Me ultimately is like that odd actor - it strives hard to be profound, but it ends up being shop-soiled.

Pattinson stars as the new age James Dean, whose super rich and privileged upbringing and a family tragedy have rendered him externally stoic and internally screaming. Of course, he also has Daddy issues - his has no time for him, his mother, or his sister. He meets equally (and this time you can actually see it) damaged Ally (Emilie de Ravin), who is a working class Queens girl.

The fact that they are both damaged and have a strange relationship with each other's parents plays out as predictably as you'd imagine. There's also a strange room-mate thrown in, who serves to eat up screen time and annoy us. The fact that this drama is set in New York in the first half 2001 goes a long way to tell you what sense of doom lurks in every frame.

The writing is thoroughly self-conscious and very very hipster, but it is also hackneyed and mind-numbingly awful. There are interactions between the characters that jar us into thinking what we would do if we met these people. I know what I'd do - slap them.

Writer Will Fetters hasn't written characters as much as he has created character stereotypes, and let the actors run with it. Despite that, some of the acting is quite good - to the point of distracting us into thinking this is a good film. Emilie de Ravin has a precociousness and a reflective sense of space that she uses quite well in her scenes with Pattinson in his dingy apartment. I can never say anything bad about Chris Cooper, and he delivers what is yet again another dependable performance. It's a standard character trope, but he brings out the wounded father in his character better than Brosnan does with his.

Brosnan's character is un-relatable at all times, and often quite forgettable, which, being Brosnan, is a crime. Robert Pattinson has the vacant stare that lets him be a good vampire, but he cannot translate that into real angst for this role - which is not just damaging to the film, it suddenly starts to exemplify it.

There are some stand out moments - most of them being with Ruby Jerins playing the younger sister - but overall this is a flat film with only a few things to help it stand. The more the unbearable dialogue hurtles towards the tragedy we all know is coming, the more it feels cheap that they chose to do so.

This is a film for the easily fooled, or the teenage Pattinson fans; everybody else can watch a better film almost anywhere else.
Share. Save. Connect.
Tweet
REMEMBER ME SNAPSHOT

ADVERTISEMENT
This page was tagged for
Remember Me english movie
Remember Me reviews
release date
Caitlyn Rund, Chris Cooper
theatres list
Follow @fullhyderabad
Follow fullhyd.com on
About Hyderabad
The Hyderabad Community
Improve fullhyd.com
More
Our Other Local Guides
Our other sites
© Copyright 1999-2009 LRR Technologies (Hyderabad), Pvt Ltd. All rights reserved. fullhyd, fullhyderabad, Welcome To The Neighbourhood are trademarks of LRR Technologies (Hyderabad) Pvt Ltd. The textual, graphic, audio and audiovisual material in this site is protected by copyright law. You may not copy, distribute, or use this material except as necessary for your personal, non-commercial use. Any trademarks are the properties of their respective owners. More on Hyderabad, India. Jobs in Hyderabad.