Made In China Review 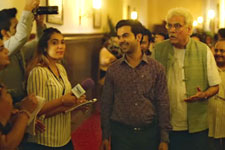 Josh / fullhyd.com
EDITOR RATING
6.0
Performances
Script
Music/Soundtrack
Visuals
8.0
5.0
7.0
7.0
Suggestions
Can watch again
No
Good for kids
No
Good for dates
Yes
Wait for OTT
Yes
Girl and guy walking together, sharing sweet nothings and bonding. You'd think this should be such a romance staple that Hindi films must have got this sorted and perfected. Yet, you'll see that this is an exercise very few directors take up, and when they do, they struggle. Like Karan Johar in Ae Dil Hai Mushkil. Or they go along the stalking route where the guy is not with the girl but after the girl. We, of course, are to buy that as romance.

But Mikhil Musale gets it right. When Raghubir Mehta (Rajkumar Rao) and Xui Lee (Danni Wang) have nothing but each other in the late night streets of Beijing, ambling about the sidewalks, they are bathed in the warm yellows of the street lights, and enveloped in pleasant guitar strains. They are not even in it for romance - he shows her his wife's photograph and tells her how he loves his wife dearly. Neither of them speaks comfortable English but they still seem to understand each other well. They drink, sing, and rest together in nameless public stairways plainly enjoying the moment. Musale gives this platonic pair more beauty and romance than any lead pair in recent Hindi films.

Directorial talent is evident in many parts of Made In China. Particularly in the interpersonal interactions - he has a great ability to put you in the scene and pay attention to these people. However, notwithstanding all this talent, Made In China is still a lukewarm affair because the writing fails.

The script simply fails to have the audience want to know what's coming next. This, despite so many seeming troubles and obstacles in Mehta's journey of becoming an entrepreneur. He is under the condescending guidance of his uncle and cousin. His son's school fees come from the cousin. His rich uncle never tires of scoffing at all his failed ventures. His latest business is not going so well either. So his uncle sends him to China where he makes interesting connections and resolves to be an entrepreneur again. His product is supposed to be a Chinese aphrodisiac which involves the private parts of tigers. But he can't market it without a supporting sexologist.

Supporting sexologist (Boman Irani) is not interested, so Mehta has to wear him down. He has to get a team, get funding, and operate surreptitious delivery networks because the business has to be a secret. Even from his loving and supportive wife (Mouni Roy). Meanwhile, a Chinese general seemingly died from consuming such an aphrodisiac, and now the CBI is interrogating Mehta for connections. Things aren't looking great for him. More worryingly for Rajkumar Rao and his team, all these things don't look very interesting to us.

Stakes is the name of the game. The script (or maybe the direction) lovingly details its individual scenes, but at no point do you feel any sense of urgency or tension. This is partly because you are almost never shown what Mehta is likely to lose if something goes wrong.

And the bigger culprits are the script's attempts at withholding information, apparently for the sake of twists. The twists come too late and at the cost of engagement in all the previous scenes. Well, we can't care for what we don't know or understand, can we? Invariably, then, we have a movie where a number of things happen where we aren't really interested in what's coming. We only enjoy what's going on.

Like the numerous double-entendres, and the splendid acting from the inphallible trio - Rajkumar Rao stands absolutely erect, Boman Irani is limp but sturdy, and Paresh Rawal is wonderfully cocky. Their towering performances rub off on their juniors making it hard for them to not pump their own blood. This is indickative of the fact that the audience came solely on the strength of the cast.

Dick jokes aside, they say seeing is believing. As you see the actors in Made in China, you believe that they are involved in something legitimately interesting and the script is not telling us what it is. We didn't particularly care about the secret ingredient in Mehta's aphrodisiac, but we are certainly interested in the secret ingredient of this story that made the actors want to fill up the script's holes with their creative juices.
Share. Save. Connect.
Tweet
MADE IN CHINA SNAPSHOT 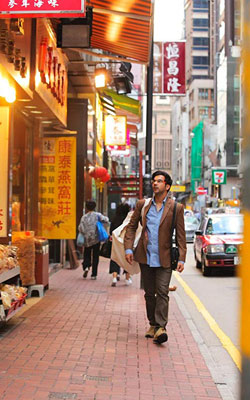 ADVERTISEMENT
This page was tagged for
Made In China hindi movie
Made In China reviews
release date
Rajkumar Rao, Boman Irani
theatres list
Follow @fullhyderabad
Follow fullhyd.com on
About Hyderabad
The Hyderabad Community
Improve fullhyd.com
More
Our Other Local Guides
Our other sites
© Copyright 1999-2009 LRR Technologies (Hyderabad), Pvt Ltd. All rights reserved. fullhyd, fullhyderabad, Welcome To The Neighbourhood are trademarks of LRR Technologies (Hyderabad) Pvt Ltd. The textual, graphic, audio and audiovisual material in this site is protected by copyright law. You may not copy, distribute, or use this material except as necessary for your personal, non-commercial use. Any trademarks are the properties of their respective owners. More on Hyderabad, India. Jobs in Hyderabad.