The Shape Of Water Review 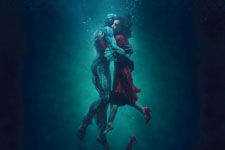 T J Reddy / fullhyd.com
EDITOR RATING
8.0
Performances
Script
Music/Soundtrack
Visuals
9.0
7.0
10.0
9.0
Suggestions
Can watch again
Yes
Good for kids
No
Good for dates
No
Wait for OTT
No
So, this movie has a woman that works a menial job. She is liked by all around her but is petrified by an authority figure that lusts after her. There is also a romantic interest who is physically disfigured but is emotionally pure. It has a song and dance number. It has a magical score, vivid set design and voice-over narration bookending its story.

If you were to forget about the sexuality, nudity, Cold War paranoia, adult themes and Michael Shannon ripping his fingers off, this is basically a Disney princess film.

The princess with the menial job in The Shape Of Water is Elisa Esposito (Sally Hawkins), a mute who works as a janitor, of sorts, at a high-security laboratory. She has a gay artist, Giles (Richard Jenkins), and a black woman, Zelda (Octavia Spencer), as her closest friends.

On a day as normal as any other, Colonel Richard Strickland (Michael Shannon) brings in a humanoid-amphibian creature (Doug Jones) and commissions Dr. Robert Hoffstetler (Michael Stuhlbarg) to perform tests on it. The former believes that the creature holds the key to the USA's victory in the Cold War space race.

While the men in power are active with their dehumanizing, single-track warmongering, Elisa forms a personal bond with the creature. This, in turn, leads to her fighting against insurmountable odds to break the creature out of captivity and set it free.

In case you did not notice it so far, the specifics of every character are what make The Shape Of Water more than your average romantic fare. Black, Gay, Mute (physically handicapped) and Exotic Creature are all held under the oppressive thumb of the White Man. This is as much a story of a band of "little guys" rising up against "the man" as it is a love story. Every aspect of these characters is carefully written and designed by Del Toro and his team. Their struggles are palpable but are never communicated with a heavy-handed approach.

The exquisite character work is also visible in the two primary male characters vying for Elisa's attention. Both The Creature and Colonel Strickland are two sides of the same coin. Both are considered all-powerful by the people whose lives are influenced by them yet both are extremely fragile entities. Their motivations for wanting to be with Elisa and the methods they use to attain her work at both illustrating the corrupting nature of power and making a scathing critique of Machiavellian philosophies.

There is a version of this story where Shannon's Strickland is captured by a group of amphibian-creatures which leads to the two primary characters and their roles being reversed. The writing is that guilt-edged and complex.

When you construct a story traversing a line this thin, falling into the murky web of tropes and clichés is a distinct possibility. While Del Toro stays on the right side for most of the film, his work is not without fault. The superfluous plot thread involving Dr. Hoffstetler, his motivations and his final fate when combined with some super convenient plot points that move the film forward, stick out prominently.

That being said, Doug Jones gives Andy Serkis a run for his money by performing his role (as the creature) to excellence. While he has a helping hand from the visual effects department when it comes to the look of the creature, it is Jones' mannerisms and movements that make the creature truly one of a kind. Even though it is inspired by The Creature from The Black Lagoon, the three-dimensional writing afforded to it helps the modern iteration rise above its mythical predecessor.

Sally Hawkins isn't afforded a mythical character, but to her credit, she is the glue holding the movie together. She is present in almost every scene, and carries them all with both poise and spunkiness.

Octavia Spencer and Richard Jenkins are good actors who make the supporting characters quite relatable. On a sidebar, Michael Stuhlbarg's performance is the only likeable thing about a frankly disposable character.

Watching over all of them with his terrifyingly ominous gaze and physicality is Michael Shannon. He plays a character that is seemingly straightforward, with a sense of menace and complexity. As with many of his cohorts, his presence is more responsible for the character's ultimate impact than the clever writing.

Enveloping all these performances and this fantastical story are production designer Paul D. Austerberry's vividly designed worlds and settings. Del Toro's penchant for visual splendour and loving nods to classic movies is well-documented, and this movie is no different. Even though it has a budget of under $ 20 million (a paltry sum by some standards), every frame is masterfully rendered. The film is a clinic on how a team with a vision and a clear understanding of their final product can churn out excellence with limited resources.

Scoring this team and story along their cinematic journeys is Alexandre Desplat. His choice to use melodic instruments to score a movie which is at times very grim is admirable and gives the film its X-factor, its aforementioned identity. The music can almost singularly carry you through the highs and lows of the movie and its making.

With all that said, the movie falls shy of true cinematic greatness by a hair. It warrants rewatches owing to its complex themes, full-fledged characters and layered ideas, but on the other hand, it relies a tad too much on convenient storytelling and narrative methods while expressing those ideas. This is Guillermo Del Toro's most accessible movie (barring Pacific Rim) but in turn is also his most saccharine. Sugary goodness is likeable only when it is administered in manageable doses. The movie rarely overdoses its audiences, but it does teeter on the line.
Share. Save. Connect.
Tweet
THE SHAPE OF WATER SNAPSHOT 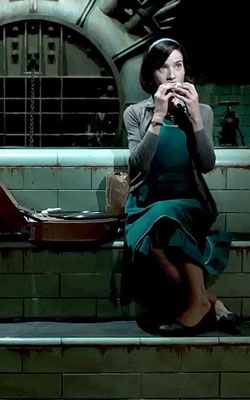 ADVERTISEMENT
This page was tagged for
The Shape Of Water english movie
The Shape Of Water reviews
release date
Sally Hawkins, Michael Shannon
theatres list
Follow @fullhyderabad
Follow fullhyd.com on
About Hyderabad
The Hyderabad Community
Improve fullhyd.com
More
Our Other Local Guides
Our other sites
© Copyright 1999-2009 LRR Technologies (Hyderabad), Pvt Ltd. All rights reserved. fullhyd, fullhyderabad, Welcome To The Neighbourhood are trademarks of LRR Technologies (Hyderabad) Pvt Ltd. The textual, graphic, audio and audiovisual material in this site is protected by copyright law. You may not copy, distribute, or use this material except as necessary for your personal, non-commercial use. Any trademarks are the properties of their respective owners. More on Hyderabad, India. Jobs in Hyderabad.