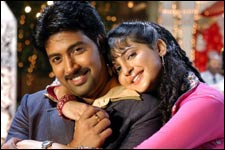 Deepa Garimella / fullhyd.com
EDITOR RATING
1.0
Performances
Script
Music/Soundtrack
Visuals
3.0
1.0
1.0
1.0
Suggestions
Can watch again
No
Good for kids
No
Good for dates
No
Wait to rent it
No
This movie is lousier than all its individual lousinesses put together, and believe us, that's an unbelievable amount of lousy. A love story lamer than anything you may have watched ever, Aha Entha Andam was made just so that it could be released, and was released just because it was made. To top the pleasantness of the experience, this one is a dubbed flick.

The pointlessness of its existence gets contagious pretty early into its proceedings. Vasu (Akash) and Nisha (Nicole) are college mates who fall in love with each other. Now, Nisha has a protective dad Alexander (Ashish Vidyarthi), who turned out that way because he's the Defence Minister of India. He is one of the reasons Vasu finds it tough to convey his feelings to Nisha.

One day Nisha gets kidnapped, and the experience traumatizes her so much that she's admitted to a (supposedly mental) hospital. Vasu's father (Sarat Babu), the doctor there, informs Vasu that she can be cured by music therapy. Vasu then dishes out a song that no sane person can consider less than ghastly. Luckily, Nisha is not sane, so she gets cured with its help immediately.

Thanks to his concern for Nisha, Vasu's parents have now figured out that he loves her, and approach Alexander for his daughter's hand. He promptly kicks them out, saying that he's a greedy politician, that only money matters to him, and some such tripe.

Nisha is then locked up at home, but Vasu manages to get her out, and the two start eloping. And then, it's not just her dad's security guards that are after her - the couple bumps into her original kidnapper as well. Much action and blood-letting later, both the families are extremely happy that their kids are alive and getting married to each other.

Firstly, the movie's plot is so stale it needs a special mention in the International List Of Bio Hazards. Secondly, while the story is never even remotely interesting to begin with, every single department tries to outdo the next to drag the whole flick downhill.

There's absolutely no thought in getting even individual scenes right. Performances range from the abysmal to the, well, even more abysmal. The comic track could, at best, bring tears to your eyes.

Then, there's some outrageous dubbing that makes several scenes hard to sit through. The editing was evidently a rush job - done in about 3 minutes. The movie is too choppy to be even called one, and the soundtrack follows suit. A few songs try to take themselves seriously but aren't worth much.

Well, unless watching Raghuvaran prancing around in a guest role is your thing, stay away from anyone who has anything to do with this movie.
Share. Save. Connect.
Tweet
AAHA ENTHA ANDAM SNAPSHOT

ADVERTISEMENT
This page was tagged for
Aaha Entha Andam telugu movie
Aaha Entha Andam reviews
release date
Akash, Nicole
theatres list
Follow @fullhyderabad
Follow fullhyd.com on
About Hyderabad
The Hyderabad Community
Improve fullhyd.com
More
Our Other Local Guides
Our other sites
© Copyright 1999-2009 LRR Technologies (Hyderabad), Pvt Ltd. All rights reserved. fullhyd, fullhyderabad, Welcome To The Neighbourhood are trademarks of LRR Technologies (Hyderabad) Pvt Ltd. The textual, graphic, audio and audiovisual material in this site is protected by copyright law. You may not copy, distribute, or use this material except as necessary for your personal, non-commercial use. Any trademarks are the properties of their respective owners. More on Hyderabad, India. Jobs in Hyderabad.