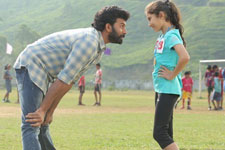 Ajay Kumar R / fullhyd.com
EDITOR RATING
6.0
Performances
Script
Music/Soundtrack
Visuals
8.0
5.0
6.0
7.0
Suggestions
Can watch again
No
Good for kids
Yes
Good for dates
No
Wait to rent it
No
Every once in a while you stumble upon a movie that manages to leave a positive impact despite several shortcomings. Pilla Rakshasi, a Malayalam film dubbed into Telugu, is one such.

10-year-old Ananya (Sara Arjun) belongs to a household run by wealthy doctors who are on the brink of a divorce due to Sara's father (Saiju Kurup) working abroad as a surgeon somewhere in a war-torn nation in the Middle East under a UN peacekeeping mission, and never spending quality time with family.

Ananya aspires to become a world-class athlete; and so starts by participating in a school-level athletics tournament. But she ends up, unintentionally, butting heads with her coach (John Kaippallil), who unfairly disqualifies her due to a grudge he holds against her for spilling the beans on an awful secret of his. This becomes a major hindrance in her path to success, as her self-confidence is overcome by the constant fear of being disqualified by her trainer.

In order to get rid of him, she literally hires a "thug" named Girish (Sunny Wayne), who accepts money for the job only to free himself of his own gang-related issues. Together, they scheme to shut her coach up and teach him a lesson. Their time together helps them form a surrogate daughter-father relationship. The story is about the lives of these two characters and how they change each other through this newly developed symbiosis.

Pilla Rakshasi, quite plainly, depicts complexities faced by the children of divorced parents and the arduous task of accepting a momentous change in life and thought. In a way, Ananya and Girish mirror each other as they try to evolve into their better selves. However, the good story comes with its blemishes. Director Midhun Manuel Thomas needlessly meanders from the crux of the story and tries to develop other characters that are not central to the plot. That also results in the story getting stretched beyond its time - less all the unnecessary sub-plots, this would be roughly a one-and-a-half-hour film focusing purely on the struggles of the lead characters.

Sara Arjun delivers an emotive performance way beyond what you'd expect of actors her age. Her expressions are almost flawless, and never give you the impression that you are watching a child debutante. She pulls off the troubled Ananya with elan, and mixes it up with hilarity and a confident persona effortlessly. She is a brilliant actress in the making.

Acclaimed Malayalam actor Sunny Wayne delivers an elegant performance as a seasoned conman struck by epiphany. But several of his dialogues and scenes seem unimportant to the progress of the narrative.

John Kaippallil as the coach is completely wasted, except for a sequence towards the end where he performs well. Shine Tom Chacko as the secondary antagonist delivers a memorable performance in a stern and strong role despite getting only two major scenes. His character however adds no heft to the plot.

The visuals are gorgeous, and the overall HD feel of the cinematics, especially the countryside, leaves you wanting more. The music (Shaan Rahman) is pretty good, but not something you will notice much in a movie that focuses more on performances.

Pilla Rakshasi is a feel-good film, if you are willing to ignore the maundering that goes into the development of the plot and the poorly-scripted dialogues in scenes involving Girish.
Share. Save. Connect.
Tweet
PILLA RAKSHASI SNAPSHOT 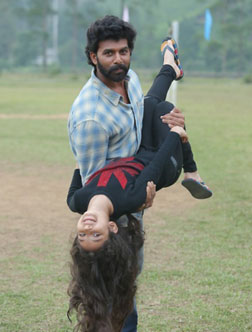 ADVERTISEMENT
This page was tagged for
Pilla Rakshasi telugu movie
Pilla Rakshasi reviews
release date
Sara Arjun, Sunny Wayne
theatres list
Follow @fullhyderabad
Follow fullhyd.com on
About Hyderabad
The Hyderabad Community
Improve fullhyd.com
More
Our Other Local Guides
Our other sites
© Copyright 1999-2009 LRR Technologies (Hyderabad), Pvt Ltd. All rights reserved. fullhyd, fullhyderabad, Welcome To The Neighbourhood are trademarks of LRR Technologies (Hyderabad) Pvt Ltd. The textual, graphic, audio and audiovisual material in this site is protected by copyright law. You may not copy, distribute, or use this material except as necessary for your personal, non-commercial use. Any trademarks are the properties of their respective owners. More on Hyderabad, India. Jobs in Hyderabad.