It's A Wonderful After Life Review 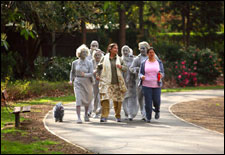 Alina Sen / fullhyd.com
EDITOR RATING
2.0
Performances
Script
Music/Soundtrack
Visuals
4.0
3.0
4.0
5.0
Suggestions
Can watch again
No
Good for kids
No
Good for dates
No
Wait for OTT
Yes
There is very little that is wonderful about Gurinder Chaddha's latest film. It's a spoof alright, but one where the cast and crew seem to have more fun - the production shots, as the credits roll have more rollicking moments than the entire movie put together - than the audience.

The story is about 'How to get my fat daughter married against all odds and ends.' Shaadi is Gurinder's favourite subject; we've seen it in Bride And Prejudice, it was there (to good effect) in Bend It Like Beckham and when it reincarnates itself here again this time with pointless ghosts in tow, it becomes a case of familiarity breeding contempt.

The film lacks the chutzpah of Bend It, and has none of the refreshing irreverence of Bhaji On The Beach; and even though it tries to run with the 'boy meets girl' theme, awkward kisses, zero chemistry, unoriginal lines, and tired acting make it more of a miss than a hit.

A middle-aged widowed mother, played by Shabana Azmi, wants to see her daughter Roopi (Goldy Notay) married and well-settled. The problem is Roopi's girth, her unwaxed moustache and her preoccupation with eating sweets. Unkind rejections, including a royal dump at the altar, make Roopi resigned, unhappy and defensive and her mother tearfully murderous.

So does Roopi meet her match? That's the film.

The mother plots all kinds of masala ends for people that stand in her way to find Roopi's life mate. There are 6 murders, 6 ghosts, the multi-racial London Metropolitan Police, and kilos of curry thrown in; with force-fed doses of Indian spirituality oozing from garish bindis sported by Dipali - Roopi's English friend Linda, who thinks a trip to India, embracing the Om and having a ringtone with bhajans is the only way to find a man to beat spinsterhood. Leaves you breathless with boredom, all the unconnected, pointless trivia.

It's A Wonderful Afterlife has borrowed left, right and centre from Ghost, The Exorcist, Ghostbusters and Gurinder's earlier movies, especially the loud Punjabi engagement bits, with nothing to hold it together, not even the acting of giants such as Shabana Azmi herself.

Why does Ms Azmi look as if she's trying too hard? Why does Goldy have only a limited set of expressions? Why is there not a single original gag in the film that comes from the stables of Gurinder Chadha?

ADVERTISEMENT
This page was tagged for
It's A Wonderful After Life english movie
It's A Wonderful After Life reviews
release date
Shabana Azmi, Goldy Notay
theatres list
Follow @fullhyderabad
Follow fullhyd.com on
About Hyderabad
The Hyderabad Community
Improve fullhyd.com
More
Our Other Local Guides
Our other sites
© Copyright 1999-2009 LRR Technologies (Hyderabad), Pvt Ltd. All rights reserved. fullhyd, fullhyderabad, Welcome To The Neighbourhood are trademarks of LRR Technologies (Hyderabad) Pvt Ltd. The textual, graphic, audio and audiovisual material in this site is protected by copyright law. You may not copy, distribute, or use this material except as necessary for your personal, non-commercial use. Any trademarks are the properties of their respective owners. More on Hyderabad, India. Jobs in Hyderabad.