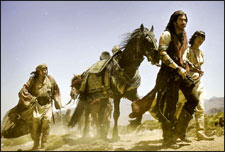 Samrat Sharma / fullhyd.com
EDITOR RATING
5.5
Performances
Script
Music/Soundtrack
Visuals
5.5
4.5
8.0
7.0
Suggestions
Can watch again
No
Good for kids
Yes
Good for dates
Yes
Wait for OTT
Yes
Video game movies are funny business. Most of them are horrible, and yet the cultural consciousness they share is so huge that they can't help making more. The problem, obviously, is that video games revel in giving the player a sense of being a character, thereby reducing the main video game characters thin enough to project on. That is a problem when you try and make a literal translation - like the newest Prince Of Persia film that tries hard enough and yet falls short.

Still, this is a new high in video game films. It is not completely bad, and bits of it are engaging. It is worth half the price of your admission ticket, which is more than can be said of films based on video games. It's a dry week for new films - and you could do worse.
Share. Save. Connect.
Tweet
PRINCE OF PERSIA SNAPSHOT

ADVERTISEMENT
This page was tagged for
Prince Of Persia english movie
Prince Of Persia reviews
release date
Jake Gyllenhaal, Gemma Arterton
theatres list
Follow @fullhyderabad
Follow fullhyd.com on
About Hyderabad
The Hyderabad Community
Improve fullhyd.com
More
Our Other Local Guides
Our other sites
© Copyright 1999-2009 LRR Technologies (Hyderabad), Pvt Ltd. All rights reserved. fullhyd, fullhyderabad, Welcome To The Neighbourhood are trademarks of LRR Technologies (Hyderabad) Pvt Ltd. The textual, graphic, audio and audiovisual material in this site is protected by copyright law. You may not copy, distribute, or use this material except as necessary for your personal, non-commercial use. Any trademarks are the properties of their respective owners. More on Hyderabad, India. Jobs in Hyderabad.