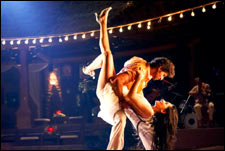 Deepa Garimella / fullhyd.com
EDITOR RATING
5.0
Performances
Script
Music/Soundtrack
Visuals
8.0
3.0
7.0
8.0
Suggestions
Can watch again
No
Good for kids
No
Good for dates
Yes
Wait to rent it
Yes
It's like being patronizingly told that since you're Indian, you won't get "international standards".

It's a bit like having an extremely lovey-dovey couple all over each other at your well-populated dinner table where you're otherwise having a lot of fun - the kind of PDA that riles you because you just don't care.

And at the end of the day, it's a lot like breathing stale air-conditioned air.

Clinical and pompously hyperactive on technical values, Kites panders to only a section of the film festival crowd. This it does while alienating itself from the rest of the world - an audience that basically came there to simply feel.

Strangely, for all its promotional puff-ups and grandiose story-telling, Kites is a pretty ordinary, formulaic, masala movie. So ordinary that if not for a package called Hrithik Roshan - that includes not just his sheer craftsmanship, but also a certain enigma generated by the fact that he stays under wraps for longer durations than he actually is seen on movie screens - it would definitely not be a patch on say, a QSQT. Not that it is anyway, but there's an entire audience out there who's currently willing to do anything to watch Roshan simply do the salsa.

It is a romantic thriller, and supposedly a tribute to a love that knows no language. It features J (a bizarrely named Hrithik Roshan), a street-smart casual loafer in Las Vegas who makes easy money off taking dance classes, and marrying illegal immigrant women desperate for green cards. One of his students Gina (Kangana Ranaut) is smitten by him, and he courts her back just because she's the daughter of an obscenely rich owner of a casino (Kabir Bedi).

Kites isn't an unintelligent flick. It's just that it doesn't have much to say. Firstly, the Indian-Hispanic romance between J (Hrithik Roshan) and Linda (Barbara Mori) is high on font size and low on content. Looks and coy smiles are exchanged, and love is (very briefly) made, but little of it really moves you.

And the conversations they have consist of slowly spelt-out contrived, cheesy lines. The way the Queen would probably converse with Mowgli. The "jokes" built up around their Spanish-Hindi communication gaps number to around 4 - yes, just a couple more than the number you already have watched in the promos.

Secondly, the thrills aren't too thrilling, to the point of being quite pointless. The villains don't anger you, innocent by-standers in the plot die for no reason, and there are a billion cars being blown up.

Also, let's face it - this one is just too firang. There's a lot of Spanish talk (with subtitles, but unengaging anyway), a lot of foreign faces, and much desperation to be a cross-over party. Adding to its problems, the story is s-l-o-w. And compounding them, the plot is narrated with the help of rather randomly ordered pieces of the plot. It's almost a desperate gimmick to be abstract.

Hrithik is gymmed-up as expected, and is perfection all by himself. He's made to dance, to perform breath-taking stunts, and he's made to majorly emote. He exaggerates his expressions in places, as is his style, but on the whole, this is a Hrithik Roshan mela.

Barbara Mori, well, is hard to judge, given that she's only a prop for the "international-ness" of the movie. She acts, though, and isn't entirely plastic. Kangana Ranaut is hopelessly wasted - we shouldn't be complaining, since she's listed as a guest star anyway. Kabir Bedi and the rest of the cast doesn't have much to do.

Salim-Suleiman do a rather delicious job with the background score, which is one of the reasons the flick has a theatrical feel. Rajesh Roshan is on the songs, and they're pretty short and sweet, with a few sounding quite '70s. Hrithik's self-crooned title number is an interesting piece, though.

Brilliantly shot scenes, including those of the Mexican desert, are other strengths of the movie. The formidable production values are quite evident.

See Kites full details
KITES USER REVIEWS
1 - 1 OF 1 COMMENTS
POSITIVE  |  NEGATIVE |  NEWEST  |  OLDEST  |  MOST HELPFUL  |  LEAST HELPFUL
USER RATING
5.4
5 USERS
Performances
Script
Music/Soundtrack
Visuals
6.0
3.8
5.8
7.0
Can watch again - No
Good for kids - No
Good for dates - Unsure
Wait to rent it - No
Mithu Hiranand Sadarangani on 21st May 2010, 11:40pm | Permalink
I watched the movie and was quite disappointed. As the title suggests there is not one kite available in the entire movie. The intention of the director is to make people feel the feeling of flying high. But even there there is nothing significant. The love story is not at all realistic. Spanish conversation and the subsequent translation in hindi or english is just prolonging the duration of the film and the character played by Barbara is of a typical spanish girl which is quite common in the latin American and European countries. This movie is not for the innocent Indian Public and more so this movie is not for the European or American people. The songs are not that good except for the two melodions songs. Music too is not very catching. Waste, Waste of money. Another movie of 2010 which I believe is a failure.


Pros: Hriticks Acting
Cons: Everything else.

ADVERTISEMENT
This page was tagged for
kites full movie
Kites hindi movie
Kites reviews
release date
Hrithik Roshan, Barbara Mori
Follow @fullhyderabad
Follow fullhyd.com on
About Hyderabad
The Hyderabad Community
Improve fullhyd.com
More
Our Other Local Guides
Our other sites
© Copyright 1999-2009 LRR Technologies (Hyderabad), Pvt Ltd. All rights reserved. fullhyd, fullhyderabad, Welcome To The Neighbourhood are trademarks of LRR Technologies (Hyderabad) Pvt Ltd. The textual, graphic, audio and audiovisual material in this site is protected by copyright law. You may not copy, distribute, or use this material except as necessary for your personal, non-commercial use. Any trademarks are the properties of their respective owners. More on Hyderabad, India. Jobs in Hyderabad.