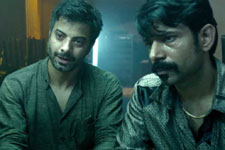 Nupur Barua / fullhyd.com
EDITOR RATING
8.0
Performances
Script
Music/Soundtrack
Visuals
7.0
8.0
6.0
8.0
Suggestions
Can watch again
Yes
Good for kids
No
Good for dates
No
Wait for OTT
No
Anurag Kashyap is a self-proclaimed people-watcher, and this is a good thing, given that he is a filmmaker. The downside, though, is that he always sees life through a depressingly dark looking glass, often interpreting actions and reactions based on his own personal life. In the process, he loses objectivity sometimes, and the movies he presents become grim, one-sided portrayals of existence, as is the case with Ugly, a movie that took some time to release. It is a hard-hitting movie, of course, and may even be considered his finest work yet, but there is a sense of dissatisfaction at the end of it all, almost because you cannot believe that every human being is inherently so dark inside.

A struggling actor (Rahul Bhat) is depressed and lonely, and life becomes worse when his wife (Tejaswini Kolhapure) and child (Anshikha Shrivastava) leave him for greener pastures. He gets to meet with his child once a week, and it is during one such outing with his daughter that his life takes a turn for the worse. He leaves her unattended for a while, and comes back to the car only to discover that she has been kidnapped.

The mother of the child, and the actor's ex-wife, may have been looking for a better life, but she ends up with ACP Shoumik Bose (Ronit Roy), a man so detached that he drives her to alcoholism. She is unhappy, and on the brink of self-destruction, when her daughter is kidnapped.

Chaitanya (Vineet Kumar Singh) is a casting director, with the right amount of sleaze and self-indulgence. He is proud of what he is, but he is surprised when he is looked at with suspicion during the investigation of the case. Actually, both Chaitanya and the child's father are considered the number one suspects in the case, much to their chagrin. ACP Bose, who handles the case, has one more reason to taunt his long-suffering wife. And Inspector Jadhav (Girish Kulkarni), who is the first cop to record the complaint, is yet another thorn in the side of the complainants.

This is a whodunit, in a way, and there are a couple of red herrings before the real clues come about, but the point remains that nobody is above suspicion. You are never quite sure you know exactly where the story is headed. This unpredictability makes it an edge-of-your-seat thriller - by the time the movie is over, you may have to deal with the loss of a fingernail or two. The director gives you an inside view of every character's working, but you never really know any of them. Each of them is as real as you and I. And just when you think that things cannot get worse, they deteriorate further.

Like in his other films, Anurag Kashyap makes a commentary on the norms that people live by in society. He laughs with no fear of the consequences of hurting somebody. The humour in the movie is uneasily realistic, and although some of the sequences are scarily pragmatic in delivery, you will be able to identify with the characters and their dialogues. The police station is the place for a few laughs, although the humour is lost when you realise that the filmmaker is not trying to be funny - he is just holding a mirror to society and asking you to note down the goings on.

At the root of this rather grim tale of humanity is a simple tale of a kidnapping. It is a rather relevant take on the crimes committed on children, and the complications that the police and the witnesses weave, sometimes unwittingly, leaving such cases unsolved. It gives you an understanding of why the police force is often considered incompetent.

Ronit Roy plays, again, the angry middle-aged man, but yet again, he gives us a character that we have not seen before. He is the show-stealer, and just does not let you take your eyes off him. Siddhant Kapoor is predictably bizarre and gross. Tejaswini Kolhapure and Surveen Chawla are just as effective, although the latter is a bit dramatic in dialogues and in presentation.

Girish Kulkarni is appropriately obnoxious, and Anshika Shrivastava is commendable in her role. The other duo you need to watch out for comprises Rahul Bhat and Vineet Kumar Singh. Together, and individually, they literally drive the film, and are the backbone of the story. The overall cast is intriguing and effectual.

The production design concentrates on grunge and grit, and makes the world of Kali a dark, intense and scary one, just like the screenplay. In fact, the costume and production designs are the visual interpretation of the story, and are so smoothly blended into the story, that you never notice them. Some of the settings are deliberately graphic-novel-like, but nothing too overt or forced.

The striking camera work, by Nikos Andritsakis, keeps you hooked. The editing is crisp, and although it is a lengthy movie, you do not feel it dragging. The music is haunting, in a way.

Anurag Kashyap is known for getting carried away with his self-indulgence. Ugly is not an example of this. In fact, this is a movie that he should have made earlier, and silenced critics who accused him of pseudo-intellect. If you admire the man, this is one movie you MUST watch - it takes you out of your comfort zone and then waits for you to find your way home. It creates panic, and some restlessness. It is, in other words, totally worth one watch, maybe more.
Share. Save. Connect.
Tweet
UGLY SNAPSHOT

ADVERTISEMENT
This page was tagged for
Ugly hindi movie
Ugly reviews
release date
Siddhant Kapoor, Tejaswini Kolhapure
theatres list
Follow @fullhyderabad
Follow fullhyd.com on
About Hyderabad
The Hyderabad Community
Improve fullhyd.com
More
Our Other Local Guides
Our other sites
© Copyright 1999-2009 LRR Technologies (Hyderabad), Pvt Ltd. All rights reserved. fullhyd, fullhyderabad, Welcome To The Neighbourhood are trademarks of LRR Technologies (Hyderabad) Pvt Ltd. The textual, graphic, audio and audiovisual material in this site is protected by copyright law. You may not copy, distribute, or use this material except as necessary for your personal, non-commercial use. Any trademarks are the properties of their respective owners. More on Hyderabad, India. Jobs in Hyderabad.