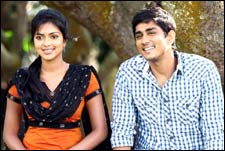 Deepa Garimella / fullhyd.com
EDITOR RATING
6.5
Performances
Script
Music/Soundtrack
Visuals
8.0
6.5
7.0
7.0
Suggestions
Can watch again
No
Good for kids
Yes
Good for dates
Yes
Wait for OTT
No
Love Failure is a contemporary, mostly realistic, albeit caricatured, look at relationships of college-going kids. It is a brave experiment - and by brave, we do not mean "skin show", or "is a breakthrough in using abusive language" - in that it devotes a whole 2 hours to merely explore girl-boy chemistry, in an industry that shies away from going any deeper than an "I love you".

The problem with movies like this is that while they're well-intentioned, they make it look like this is how life on campus is - that if you're in college and not landing a girlfriend/boyfriend and spending time with her/him in overpriced coffee shops or shopping malls, you're not very cool. Yes, smartly written though these films are, they have an issue connecting with the crowds that do not frequent those coffee shops - the more ordinary mortals, that are also the majority.

Then again, nothing sells like romances between well-dressed people in good-looking settings, so we guess that's that.

Arun (Siddharth) and Parvati (Amala Paul) go gently from being friends to boyfriend-girlfriend, but something goes wrong somewhere, and they break up. The tiffs happen because they're both not emotionally equipped to handle a relationship, with Parvati being demanding, and Arun trying hard to please and yet ending with egg on his face.

The plot is basically a journey of their affair, and tells their story while also relating stories of people around them. One of them is the expertly-handled narrative of the marriage of Parvati's parents (played by a brilliant Suresh, and Surekha Vani).

The story is narrated by Arun/Siddharth talking to the camera and going back and forth about the events that make up the movie. There's a funky touch to the whole approach, and this succeeds in keeping you engaged even when things on screen slacken and seem tiresome.

It wouldn't be unfair to make allegations of gender discrimination against Love Failure, since the Arun-Parvati equation has been narrated from the point of view of the guy, and clearly skewed against Parvati. She is portrayed as this unreasonable nagger, and Arun as someone who cannot wrap his head around her idiosyncracies. Then again, they tell us it is because she has issues at home.

And yet, it is difficult to fault this movie for lack of authenticity of its source material, even if it sometimes doesn't execute things all that well. The sequence about the guy Rama having to socialize with his ex-girlfriend, who is now engaged to his own friend, is one of the ways the movie tries to show contemporary relationship issues. However, that is a sequence that becomes long-drawn, with unlikely twists.

While it helps that Siddharth's goofy 20-something avatar fits the bill here, Amala Paul also must take credit for her highly dependably screen presence and capacity to emote. Surekha Vani and Suresh are engaging. All the other actors, who play roles of different students and friends, are good.

Thaman's music adds to the crispness of the film, and the visuals are pretty good. The dubbing (this is a Tamil-Telugu bilingual) hurts the viewing experience most of the time, though.

In all, a clean, decent watch for those looking for this kind of cinema.
Share. Save. Connect.
Tweet
LOVE FAILURE SNAPSHOT

Love to watch this once again :-)

ADVERTISEMENT
This page was tagged for
Love Failure telugu movie
Love Failure reviews
release date
Siddharth, Amala Paul
theatres list
Follow @fullhyderabad
Follow fullhyd.com on
About Hyderabad
The Hyderabad Community
Improve fullhyd.com
More
Our Other Local Guides
Our other sites
© Copyright 1999-2009 LRR Technologies (Hyderabad), Pvt Ltd. All rights reserved. fullhyd, fullhyderabad, Welcome To The Neighbourhood are trademarks of LRR Technologies (Hyderabad) Pvt Ltd. The textual, graphic, audio and audiovisual material in this site is protected by copyright law. You may not copy, distribute, or use this material except as necessary for your personal, non-commercial use. Any trademarks are the properties of their respective owners. More on Hyderabad, India. Jobs in Hyderabad.