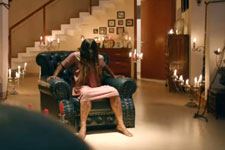 Neema Pramod / fullhyd.com
EDITOR RATING
5.5
Performances
Script
Music/Soundtrack
Visuals
6.5
3.0
6.0
5.0
Suggestions
Can watch again
No
Good for kids
No
Good for dates
No
Wait to rent it
Yes
Raghava (Raghava Lawrence) is terrified of ghosts. How terrified? Well, let's just say that when he needs to pee, his entire (loud) family has to sing and dance in front of the toilet. Despite this if something manages to scare him, he'll run and jump into the arms of whoever he finds first, usually his mother (Kovai Sarala).

Sounds familiar? Yeah, that's just because this is the same thing you have seen in every film in the Kanchana franchise. However, this time Raghava decides to do things a little differently. Instead of having a shoe and a broom near his bed to ward off evil spirits, he gets himself a shoe-bed. And to avoid disturbing his mother at night when he wants to pee, he builds a toilet right next to his bed.

The story begins when Raghava and his family go to their ancestral home for a family function. Strange things begin to occur, and soon Raghava is possessed by - not one but - two ghosts seeking revenge.

As always, the first half is filled with jump-scares (i. e. faces with garish make-up popping up at regular intervals as soon as the sun sets), and some comedy featuring Raghava's (did I say it out loud?) family. And a major chunk of the second half is the tale of Kaali (again Lawrence, but in a salt-and-pepper look), a good Samaritan who crosses paths with a corrupt politician.

Kanchana 3 (dubbed from Tamil) is the third instalment in the Kanchana franchise and the fourth in the Muni franchise. It is also the weakest film in the franchise, primarily because the flashback isn't impactful enough. Also, Kaali's story is like that of any other mainstream film hero, complete with a Rajnikanth-esque hero-introduction scene and punch dialogues set to a thumping score by S Thaman. And while like the previous films here too Lawrence tries to bring forth the plight of the disabled and the downtrodden, they are just in the fringes, existing just to extol the virtues of the hero.

Even the comedy has begun to feel a bit repetitive at this point. Apart from the by-now-familiar characters of Raghava's mother, his annayya and his vadina, you also get three heroines (played by Oviya, Vedhika and Nikki Tamboli). They are Raghava's cousins, and all they have to do here is wear skimpy clothes and flirt with their baava - that is when they are not being chased by the spirits.

However, despite all this, Kanchana 3 is sure to set the cash registers ringing. Both in Tamil and Telugu, the success of Kanchana and Muni led to the birth of many other films of the horror-comedy genre, but none of them has managed to ape Lawrence's success. He knows exactly what his audience wants - a few hours of mindless fun with a few scares - and he gives it to them in abundance. It also helps that the films don't take themselves too seriously by trying to become more than what they are.

As for the performances, there is nothing new to be said, really. Raghava does what he does best - dancing and making faces - while Kovai Sarala, Devadarshini, Sriman and others stay true to their characters from the previous movies. The girls do their job of strutting around looking pretty / scared well. The songs are peppy but don't have repeat value, while the score punctuates the scenes well.

Overall, if you have enjoyed the previous films of the franchise, or if you are just looking to switch off your brains for a few hours with only some loud humour, pretty girls and ghosts for company, Kanchana 3 will definitely not disappoint you. However, if you go in looking for logic and some spine-chilling horror, you are entering the wrong place.
Share. Save. Connect.
Tweet
KANCHANA 3 (TAMIL) SNAPSHOT 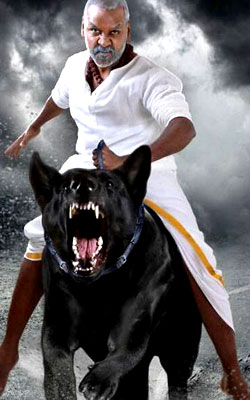 ADVERTISEMENT
This page was tagged for
kanchana 3 movie scenes tamil
kanchana 3 telugu full movie online free
watch kanchana 3 tamil movie online free
kanchana 3 full movie online
kanchana3 Tamil Onlin fullmoovi
Follow @fullhyderabad
Follow fullhyd.com on
About Hyderabad
The Hyderabad Community
Improve fullhyd.com
More
Our Other Local Guides
Our other sites
© Copyright 1999-2009 LRR Technologies (Hyderabad), Pvt Ltd. All rights reserved. fullhyd, fullhyderabad, Welcome To The Neighbourhood are trademarks of LRR Technologies (Hyderabad) Pvt Ltd. The textual, graphic, audio and audiovisual material in this site is protected by copyright law. You may not copy, distribute, or use this material except as necessary for your personal, non-commercial use. Any trademarks are the properties of their respective owners. More on Hyderabad, India. Jobs in Hyderabad.