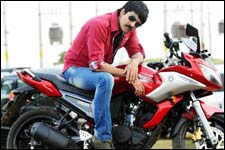 Deepa Garimella / fullhyd.com
EDITOR RATING
5.0
Performances
Script
Music/Soundtrack
Visuals
6.0
3.0
3.0
7.0
Suggestions
Can watch again
No
Good for kids
No
Good for dates
No
Wait to rent it
Yes
500 SUVs do not a movie make, but nobody associated with Nippu seems to realize this for the most part, even as the film noisily pounds its way through 2.5+ hours, oblivious of its mind-numbing capabilities. Devoid of any personality of its own, Nippu is as "average" as average gets.

On the brighter side (?), we don't think there's an issue with mismatched expectations. If the promos didn't tell you, the first few scenes of Nippu tell you exactly what to expect - nothing. We're introduced to the smart-aleck hero, who quickly manipulates 3 huge bunches of huge goons into thrashing one another up, and presently, there's a "title song" which proceeds to show us the hero's dance moves.

The story that unfolds is ordinary, with a twist that had potential to make an impact but that is never treated well. Said hero, Surya (Ravi Teja), is the best friend of Sriram (Sriram), who lives in Saudi Arabia. When Surya goes to visit him in the oil kingdom, he discovers a horrifying twist - one that must necessarily be kept hidden from Sriram's father (Rajendra Prasad), since he is a heart patient.

Now, Surya must deal with villains of various kinds, but mostly, with a powerful don called Raja Goud (Pradeep Rawat). Somewhere in the midst of the proceedings, the makers decided to play with a sequence on liquor license auctions, even tossing in the phrase "liquor syndicate" for good measure.

And Surya's romantic track is taken care of by Deeksha Seth playing Meghana, Sriram's sister, who is an aspiring running champ.

A formula cannot be accused of bringing down a film all by itself, and in Telugu movies, the one thing that prevents us from cribbing about formula is the comedy. Nippu makes the mistake of not coating its tired plot with humour, or even powerful dialogues. Brahmanandam, as Meghana's uncle, is unfunny. You can actually see how desperate the writers get when they make Surya slap Brahmanandam repeatedly in one of the scenes.

The dialogues are short bursts of half-baked attempts at creativity - they're quite contrived and just do not work. There are also some issues with a few loose ends not being tied up in the end. For example, what happened to Vaishnavi's mother's wish of getting the other daughter married to Surya?

However, the one thing Gunasekhar can take credit for is some of the grand action sequences and chases, involving heavy-duty vehicles being blown up, bulls raging through streets, and choreographed fights.

Ravi Teja could have sleepwalked through the film, if not for the fact that he's made to scream a lot. Deeksha Seth is believable, and suitably sweaty for her role as a sportswoman, but she lacks the spark required of a leading lady.

Thaman's music is loud and devoid of art. As for the visuals, the colours seem to have been digitally enhanced and altered, and this is a put-off in the scenes with pinks and fluorescent greens.

ADVERTISEMENT
This page was tagged for
Nippu telugu movie
Nippu reviews
release date
Ravi Teja, Deeksha Seth
theatres list
Follow @fullhyderabad
Follow fullhyd.com on
About Hyderabad
The Hyderabad Community
Improve fullhyd.com
More
Our Other Local Guides
Our other sites
© Copyright 1999-2009 LRR Technologies (Hyderabad), Pvt Ltd. All rights reserved. fullhyd, fullhyderabad, Welcome To The Neighbourhood are trademarks of LRR Technologies (Hyderabad) Pvt Ltd. The textual, graphic, audio and audiovisual material in this site is protected by copyright law. You may not copy, distribute, or use this material except as necessary for your personal, non-commercial use. Any trademarks are the properties of their respective owners. More on Hyderabad, India. Jobs in Hyderabad.