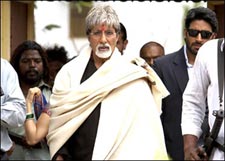 EDITOR RATING
5.5
Performances
Script
Music/Soundtrack
Visuals
8.5
5.5
7.0
9.0
Suggestions
Can watch again
No
Good for kids
No
Good for dates
Yes
Wait for OTT
No
The worst part of crippling grief is the realization of having to continue to live the rest of life with it. So when Sarkar is facing perhaps the worst demon of his life towards the end of this worthy sequel, you kinda feel okay - how much more life has the old man left, anyway?

Only, perhaps that's still naive sympathy. The man is still Sarkar, with the mental makeup needed to become Sarkar. There's a sense of purpose, calculativeness and clarity of decision-making needed to become an overarching don, and that kind of approach over decades sends emotions down the hierarchy, if not straight into the dustbin. He can't be as crippled as you would perhaps be in the same situation, and he wouldn't stay that way for as long.

Then, Shankar Nagare, the son, who carries the same cold clarity of thought and ruthlessness, still asks his father how he can forget nazdeeki nuksaan for door ka phayda, when his wife is killed.

Yes, Sarkar Raj aims to indulge mostly in characterization - there's not as much violence as there are lines. However, it doesn't really work, and that's mostly due to the writing. There's no richness in detail, and for an attempt to delve deeper, it's too cut and dry. For example, Aishwarya Rai remarks to Abhishek on how she's never seen quite a father-son like him and Amitabh, and the brief scene before that when she's seen the two of them together for the first time doesn't really warrant such a lofty line.

The villians are none too impressive, either. Strangely for an RGV gangster movie, there's no one man who you identify as this one's Satan right till the end. And you don't know who's plotting, and what he's plotting. And why Sarkar Junior doesn't get them well in time when he knows who they are, given his reach.

The plus points of the movie, then, are mainly the standard RGV visual, music and editing effects which seem to make any movie of his look good, the starcast, and the lack of just any other options in Hindi. And yes, they make this one worth the Rs. 100 if that's what you normally spend.

Sarkar Raj deals with a Rs. 200,000 crore power plant that the CEO of a firang company, Anita Rajan (Aishwarya), wants to start in Maharashtra. However, some 40,000 people need to be displaced from their villages for that, and after initial hemming, the Nagares - Subhash (Amitabh, Sarkar) and Shankar (Abhishek) - decide to support it since it will take Maharashtra to a different level.

However, a local leader, Sanjay Somji (Rajesh Shringarpore), nephew of Rao saab (Dilip Prabhavalkar), a Gandhian revered in the area who Sarkar introduces as his mentor but which has no explanation or genuineness, turns chief rabble-rouser, inciting riots against Sarkar.

Shankar, who is championing the plant, tries to talk to Somji, but Hassan Qazi (Govind Namdeo), an enemy he's made, starts queering the pitch, starting with bombing Avantika (Tanisha), Shankar's wife, out of this world. Shankar surprisingly does not retaliate with the brute ruthlessness that is his wont (and there's no explanation why, given he knows Qazi did it), and there's a heavy price he pays for that as Qazi makes his next moves.

The movie seems to progress more in fits and starts than in a smooth and logical narration. Aishwarya has almost nothing to do - and the way she turns from ruthless corporate hotshot to almost philanthropist, without any landmark incident to catalyse her attitude shift, is as unconvincing as most other things about the film. The movie has plenty of such issues - for example, why is there so much violence and bloodshed in Somji's kidnapping? And in his rescue, where Qazi gets killed? And how come Chander takes so much risk (the explanation Sarkar gives is too esoteric)?

Amitabh's acting is a given - it's rather pointless to say he's the best in any movie. For Abhishek, this role is pretty much his niche - the frugal-with-words, no-nonsense character. Aishwarya does a what she needs to, but is she starting to look older? Sayaji Shinde seems to have little to do - his character seems shoehorned in. Rajesh Shringarpore does a fine bit as the vituperative rabble-rouser.

Sarkar Raj might have made a good watch with a neatly sewed up tale. It still stays an above-Bollywood-average flick, and like we said, given the star-power, production values and lack of options, makes for a good outing.

See Sarkar Raj full details
SARKAR RAJ USER REVIEWS
1 - 7 OF 7 COMMENTS
POSITIVE  |  NEGATIVE |  NEWEST  |  OLDEST  |  MOST HELPFUL  |  LEAST HELPFUL
USER RATING
7.8
11 USERS
Performances
Script
Music/Soundtrack
Visuals
7.8
7.3
7.0
7.8
Can watch again - Yes
Good for kids - Unsure
Good for dates - Yes
Wait for OTT - No
epifinibox on 6th Jul 2008, 5:59pm | Permalink
happened to watch that "Hey..raama.." song from Rangeela again today....In that song,RGV have portrayed the act of sex like a attack and defence...Like dominique wanted it and but she defenced it...Howard was attacking her like an animal....Is that an inspiration from that rape scene[i dont know weather one could call it a 'rape' ] from "fountainhead' ......if you portrayed it as ur version you could have sensed the original reasoning behind that....Howard thinks that 'having that kind of a brutal sexual act is just a necessity for him like making the building on the earth......RGV is a great ayn rand fanatic...could that be the logic behind this song?
Krishna on 2nd Jul 2008, 9:36am | Permalink
Not bad. Can watch it once.

RATING
9
Aakash chandra on 9th Jun 2008, 2:30pm | Permalink
First of all people have almost forgotten the fact that they once believed -Ramu is the saving grace of Indian cinema. Its hard for them to embrace the kind of realism that is projected in his movies maybe because reality bites, may be because his creativity shuns the icing on the mundane mediocrity of the run-of-the-mill cinema. Its hard for people to accept the vulnerability of the protagonist.They just want 'him' to achieve impossible feats, do the unthinkable, survive the doom's-day arsenal. And when they taste the stark realism in ramu's movies, they find the icing(or the lack of it) so bitter that instead of appreciating the slices-of-life, in your-face, hard hitting actualities, they end up rubbishing such work. The problem perhaps lies in how their palate has been subjected for the last gazillion years to such fantasy and-they lived-happily-ever-after-meal. Its time to applaud when a healthy change that questions the very direction indian cinema has been taking which we are so rejoicing our not knowing that we have been the frogs in such "same-old" well.
sarkarRAJ is a well executed drama with plots and subplots that suck the audience into its complex web through its multilayered storytelling that plays with the chills running down the spine. Welcome to Ramu's world where deceit, loyalty, royalty,trust, vengeance, tryst with the Nagres' genuine intentions of serving the public. The first rate cinematography by Amit Roy exemplified by the you-are-amongst-the-characters transporting deserves kudos.The way camera slowly zooms out to include the tea cup holding hand of a no-mercy abhishek teaching what happens to a would-be assasin in the initial sequence just shows that this movie is going to pull you back to the theatre many times just to discover such carefully crafted visual poetry many of which could be subdued due to the weight of the dialogue,score etc. Dialogue is crisp, caustic and explodes in silence. The saam-daan-bhed-dand sequence of score that tags abhishek's intensity absolutely heightens the feel and the adrenaline of the movie.Aishwarya for the first time lives her role,especially when her cries echo the volcano of pain inside. The twist just puts the movie in an other plane and the executions triumph style and substance which is usually a rarity. Prashant pandey the prolific first-timer writer, carries out his job with elan and leaves us craving for his future projects. Over all a splendid experience.A must watch

RATING
9
the_juggernaut on 9th Jun 2008, 12:47pm | Permalink
Sarkar Raj is a worth wathching movie despite of minor flaws in the script, slow paced screenplay and unimpressive twist.

ADVERTISEMENT
This page was tagged for
Sarkar Raj hindi movie
Sarkar Raj reviews
release date
Amitabh Bachchan, Abhishek Bachchan
theatres list
Follow @fullhyderabad
Follow fullhyd.com on
About Hyderabad
The Hyderabad Community
Improve fullhyd.com
More
Our Other Local Guides
Our other sites
© Copyright 1999-2009 LRR Technologies (Hyderabad), Pvt Ltd. All rights reserved. fullhyd, fullhyderabad, Welcome To The Neighbourhood are trademarks of LRR Technologies (Hyderabad) Pvt Ltd. The textual, graphic, audio and audiovisual material in this site is protected by copyright law. You may not copy, distribute, or use this material except as necessary for your personal, non-commercial use. Any trademarks are the properties of their respective owners. More on Hyderabad, India. Jobs in Hyderabad.