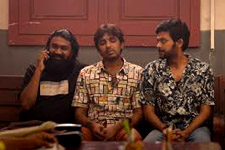 Anil Bandhakavi / fullhyd.com
EDITOR RATING
8.0
Performances
Script
Music/Soundtrack
Visuals
8.0
8.0
7.0
7.0
Suggestions
Can watch again
Yes
Good for kids
Yes
Good for dates
Yes
Wait for OTT
No
Good comedy is often broken down objectively to analyse a writer's approach in the form of structures and patterns. However, this is all after the fact. When humour is transmitted and laughter is induced, the structures and patterns are stuffed into a greater medium which is just a quality. Jathi Ratnalu, written and directed by Anudeep K V, does not falter for one moment in emanating this quality with zero blur - right from the get-go, all the way to the final punchline.

Srikanth (Naveen Polishetty), Shekhar (Priyadarshi) and Ravi (Rahul Ramakrishna) are three of the most idiosyncratic youngsters of Jogipet. Instead of figuring out the important matters of life, they while away their time in silly arguments which could be as trivial as whether they took a left or a right turn on a drive three years ago.

Srikanth has got a knack for suggesting the best accessories to go along with a woman's attire, and is favoured by his father, who believes he's not good for much else, to take over management of the family's business - Srikanth Ladies Emporium. But Srikanth has other ambitions. And Shekhar prides himself on knowing how to prepare the perfect batch of rice, and Ravi is a hopeless romantic.

When Srikanth decides to move to Hyderabad to start a new life, Shekhar and Ravi tag along. They hustle their way into an apartment, whose owners are away, in a fancy gated community. Chitti (Faria Abdullah) is the neighbour's daughter, and Srikanth quickly gains her admiration. However, fate takes an interesting course, and a case of attempted murder of Chanakya (Murali Sharma), a politician with twisted interests, gets pinned on the three friends.

Jathi Ratnalu is a punchline extravaganza. The dry and sarcastic comebacks keep knocking you down in a plot that meanders through a series of hilarious exchanges. Things are funny not because of some inherent level of humour in the dialogue, but because of the delivery. Like when Srikanth is thrown a rhetorical jibe about whether he even knows what a "Ph.D." is. The clever writing is garnished with well-timed call-backs that are worthy of applause breaks.

Excellent performances give the cutting dialogue its character. Naveen Polishetty is phenomenal as the lead man, but his strength would be absent without the precise support of Priyadarshi, Rahul Ramakrishna, Faria Abdullah and Murali Sharma. The star cast is also an extravaganza in itself, leaving no room for error, with Vennela Kishore, Tanikella Bharani and Brahmanandam (to bless the film's "comedy" tag) on top of the main actors. And as if the icing was not enough there's a cameo appearance by Vijay Devarakonda.

Anudeep makes a super smart move by depicting Chitti as a goofy female equivalent of Srikanth and his buddies (while slickly maintaining her womanly attractiveness), instead of disturbing the tone of the film with a love drama on a different wavelength. When Chitti shows up to represent the guys in court with her half-baked knowledge of the law, she fits right into their shenanigans.

Five-star cinematography by Siddam Manohar, along with appealing set design, captures shots devoid of unnecessary contrivances, like the aerial shots of Jogipet and the beat-up yellow Maruti 800 car in which the boys come to Hyderabad. The music by Radhan has a caricatured sound that packs in the essence of the trio and their tale, best represented in the hit song "Chitti", beautifully sung by Ram Miriyala.

No beating around the bush is necessary for making a two-thumbs-up recommendation to go watch Jathi Ratnalu, an air-tight comedy entertainer.
Share. Save. Connect.
Tweet
JATHI RATNALU SNAPSHOT 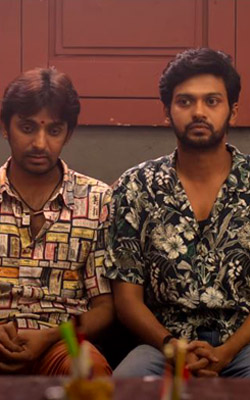 ADVERTISEMENT
This page was tagged for
Jathi Ratnalu telugu movie
Jathi Ratnalu reviews
release date
Naveen Polishetty, Priyadarshi
theatres list
Follow @fullhyderabad
Follow fullhyd.com on
About Hyderabad
The Hyderabad Community
Improve fullhyd.com
More
Our Other Local Guides
Our other sites
© Copyright 1999-2009 LRR Technologies (Hyderabad), Pvt Ltd. All rights reserved. fullhyd, fullhyderabad, Welcome To The Neighbourhood are trademarks of LRR Technologies (Hyderabad) Pvt Ltd. The textual, graphic, audio and audiovisual material in this site is protected by copyright law. You may not copy, distribute, or use this material except as necessary for your personal, non-commercial use. Any trademarks are the properties of their respective owners. More on Hyderabad, India. Jobs in Hyderabad.