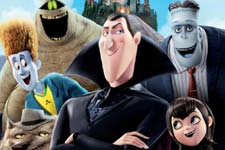 Nupur Barua / fullhyd.com
EDITOR RATING
5.0
Performances
Script
Music/Soundtrack
Visuals
5.0
4.0
6.0
8.0
Suggestions
Can watch again
No
Good for kids
Yes
Good for dates
Yes
Wait to rent it
No
It took the Sony Pictures Animation group six years and six directors to decide how they wanted Hotel Transylvania portrayed. With the variety in creative inputs, it is hardly surprising that when Genndy Tartakovsky re-wrote and re-imagined the project, he lost out the soul of the movie. Not that he is to be blamed for the miserable script, at least, not wholly. If anything, it is his vision and aesthetics that make the movie watchable.

In 1895, Count Dracula (Adam Sandler) has only one fear - humans. His wife was killed in a human attack, and now he has to bring up his little daughter Mavis (Selena Gomez) all alone. So scared is the bat-man of humans that he is willing to overlook his issues with other monsters. He becomes the uniting factor and leader in the monster world, especially since his castle is now a hotel, Hotel Transylvania, that is ideally located and human-proof, thus providing security to his group of undead beings.

Mavis, however, has been waiting for a chance to confront her father about his overbearing protectiveness, and to go out and explore the world. In the meantime, Jonathan (Andy Samberg), a trekker with an unnatural relationship with his backpack, stumbles his way into the hotel.

The story, in a nutshell, is predictable. There may be a message there somewhere, if you really look for it. Maybe it is the fact that Dracula, like many of us, stubbornly hangs on to his convictions without knowing how much the world has progressed. Or maybe it is a take on friendship, love and letting go. Whatever the message, the script fails to hit home.

For one, there is no depth in any of the characters, except, maybe Dracula, but even then he can be irritating. You cannot relate to any of the others. What makes this lack more apparent is the use of heavy, soul-searching dialogues that sound ludicrous coming from this pack of superfluous, non-scary, loser-like monsters. The personal/spiritual journey of Dracula falls flat. The references to well-known monsters and their history are not done too cleverly, either.

What the movie leaves you with, then, is its visual brilliance. In the director's own words, he was determined to incorporate the "energy, organi-ness and exaggeration" of 2D animation, made popular by Daffy Duck and Bugs Bunny, amongst others. Dracula's sudden bouts of rage, Mavis's habit of changing into a bat at random, plenty of beating, biting, throwing, burning, falling, and other violence (and never getting hurt), exaggerated expressions and a lot of stuff with the eyes - all these are a tribute to the era of 2D cartoons. There are plenty of laugh-out-loud moments, if you resign yourself to the absence of logic and emotion.

In other words, go with the flow. Hotel Transylvania is great for kids, but you may just want to give in to the complete nonsense that plays out on screen. Given its execution, the animation works equally well as a 2D movie - actually it may seem more fun without the burden of those glasses on your nose.

As for the actors, none creates an impression, at least not positively. Although Adam Sandler manages to retain the accent as Dracula, he sounds more Italian than Romanian. Andy Samberg is sometimes annoying, Selena Gomez is average, and Kevin James is the only one with some character in his voice.

Do not expect logic (how does a human have a relationship with a vampire; how do vampires have babies that grow into adults; how does a bat burn and not die; if the wolf can speak, why can't the rat - the list is endless), and you may just come out of this movie alive. Your kids definitely will.
Share. Save. Connect.
Tweet
HOTEL TRANSYLVANIA (3D) SNAPSHOT 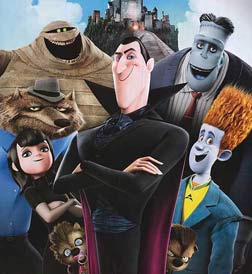 ADVERTISEMENT
This page was tagged for
Hotel Transylvania (3D) english movie
Hotel Transylvania (3D) reviews
release date
Adam Sandler (Voice), Andy Samberg (Voice)
theatres list
Follow @fullhyderabad
Follow fullhyd.com on
About Hyderabad
The Hyderabad Community
Improve fullhyd.com
More
Our Other Local Guides
Our other sites
© Copyright 1999-2009 LRR Technologies (Hyderabad), Pvt Ltd. All rights reserved. fullhyd, fullhyderabad, Welcome To The Neighbourhood are trademarks of LRR Technologies (Hyderabad) Pvt Ltd. The textual, graphic, audio and audiovisual material in this site is protected by copyright law. You may not copy, distribute, or use this material except as necessary for your personal, non-commercial use. Any trademarks are the properties of their respective owners. More on Hyderabad, India. Jobs in Hyderabad.