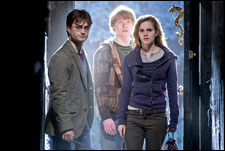 Deepa Garimella / fullhyd.com
EDITOR RATING
8.0
Performances
Script
Music/Soundtrack
Visuals
7.0
8.5
7.0
9.0
Suggestions
Can watch again
Yes
Good for kids
Yes
Good for dates
Yes
Wait to rent it
No
When you're wishing for time to stop, and for Harry Potter and his trio to not end their search for the Horcruxes too soon, just so that the inevitable finale may be delayed, you know the movie and the book have got several things right.

Harry Potter 7 is not only a more evolved book-adaptation than its predecessors in the series, but also carries that extra dollop of enchantment because it leaves you gasping for the next part. Plus, like we said, you want Part 2 badly and right now, but you can't bring yourself to face the fact that it's going to be the last act.

And if you're not a Harry Potter aficionado, too bad. But not that bad - there's no better time to hop on than now.

The first part of the Deathly Hallows film shows what happens once the Dark forces have taken over the Ministry Of Magic after Dumbledore's death. Potter, Hermoine and Ron have moved out of Hogwarts, in a quest to find the remaining of the Horcruxes - objects that are Voldemort's devices that hide parts of his soul so he can attain immortality.

The three friends keep apparating to different places undercover, and led by Hermoine, they manage to crack a few clues. Dumbledore has left in his will special gifts to each of Harry, Ron and Hermoine, which they find are useful in their search for the Horcruxes. Meanwhile, Voldemort is seeking the Elder wand, one of the 3 "Deathly Hallows".

The characters are much less awkward and surer of themselves than they've ever been, and complicated self-introspections are kept to a minimum. Despite the fact that the real action is kept for the sequel, there are quite a few chase scenes and thrills as well to indulge the special effects fan. The transfiguration scenes are well-done, too.

Moments of finesse are present as well. For instance, the sequence that describes the Deathly Hallows myth is brilliantly conceived, and is one of the most magical parts of the flick.

Rupert Grint as Ron is the most animated of the cast, Daniel Radcliffe seems to have become marginally more expressive, and Emma Watson's transformation into a heroine is pretty impressive. Voldemort could have looked more evil, though. Some characters usually sidelined in the HP series are brought to the forefront, like Luna Lovegood and her father.

Expansive and enigmatic moors, valleys, hillsides and forests form part of the brilliantly-shot landscape. However, the subtitles, though useful, tend to mar the viewing quality.

Missing Harry Potter & The Deathly Hallows Part 1 is not advised, so grab your ticket as early as you can.

ADVERTISEMENT
This page was tagged for
Harry potter and the deathly hallows movie in hindi
harry potter all parts in hindi 143
Harry Potter 7 part 1 hindi dubbed
harry potter deathly hallows part 1 full movie download in hindi hd
harry potter and deathly hallows part 1 in hindi watch
Follow @fullhyderabad
Follow fullhyd.com on
About Hyderabad
The Hyderabad Community
Improve fullhyd.com
More
Our Other Local Guides
Our other sites
© Copyright 1999-2009 LRR Technologies (Hyderabad), Pvt Ltd. All rights reserved. fullhyd, fullhyderabad, Welcome To The Neighbourhood are trademarks of LRR Technologies (Hyderabad) Pvt Ltd. The textual, graphic, audio and audiovisual material in this site is protected by copyright law. You may not copy, distribute, or use this material except as necessary for your personal, non-commercial use. Any trademarks are the properties of their respective owners. More on Hyderabad, India. Jobs in Hyderabad.