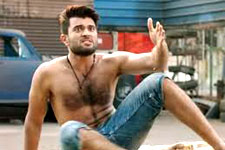 T J Reddy / fullhyd.com
EDITOR RATING
6.0
Performances
Script
Music/Soundtrack
Visuals
5.0
5.0
6.0
6.0
Suggestions
Can watch again
No
Good for kids
No
Good for dates
Yes
Wait for OTT
Yes
In honour of my review of the week, let's play a little game of movie title reshuffling. Taxiwaala is not an appropriate title for Vijay Devarakonda's latest cinematic offering. That title would have better served Mahesh Babu's ludicrously titled Khaleja. And the title Khaleja would have better served a slew of commercial movies which boast of titles such as Dhammu, Dharuvu, Balupu, Dookudu, Aagadu, and so on and so forth. You may ask us what we would have titled this two-and-a-half-hour sci-fi-horror-comedy. The cynics in us would want to christen this Tarzan: The Wonder Car as this is what that mid-00s CGI-fuelled dumpster fire wanted to be. A car with a mind and purpose of its own that helped its bumbling hero through life.

Taxiwaala, however, wants to elevate itself above a one-line plot description by infusing its narrative with the oft-discussed concept of Astral Projection. Akin to our title-swapping antics from a paragraph ago, Taxiwaala's narrative involves reshuffling of souls from animate to inanimate objects. Siva (Vijay Devarakonda) purchases one such inanimate object (a car) with a soul as he sets himself up as one of the drivers in a ride-sharing service. At first his customers experience a handful of hauntings, then Siva and his merry men experience their own set of hauntings, and finally they work to rid themselves of these hauntings, and with that, the film slowly and surely rids itself of all that elements that made it unique.

Even though the film's protagonist uses a ride-sharing app, it isn't titled Uber-waala or Ola-waala simply because the title Taxiwaala is in line with a story that hasn't moved on with the times. If they could, the filmmakers would have painted a streak of yellow on that gorgeous black Contessa to prove their adherence to "traditional" values. The later stages of
Taxiwaala are eerily similar to the later stages in a person's life. The views become a tad myopic, the stories become a tad familiar, and the tall tales aren't laced with enough character to warrant an audience member's undivided attention.

There is merit to the story being told but one would rather hear it powered by a person with a more excitable voice.

In its infancy and rebellious teen years, Taxiwaala has a flair about it. It juggles tones and characters, and establishes story arcs with ease. It talks a big game and has a forgettable first-love affair, but when it can't walk the walk with solid material, it laughs at itself and talks more talk. It is an underdog fighting against its weight class, and to its benefit, everyone loves an underdog with a sense of humour.

With a youthful exuberance powering it, it throws a million things at the wall, hoping something will stick, and because the world is cruel, what eventually has the most staying power is a melodramatic flashback episode that went out of date before that bottle of milk my grandpa threw away four decades ago. The filmmakers try to spice things up by reminding the audience that there are a heaping helping of comedy and some pseudo-scientific jargon attached to the story, but their efforts end in vain simply because an audience can smell inauthenticity from a mile away (that comical device used to detect the presence of a spirit is doing the movie no favours either).

This jarring shift in story-telling bleeds into aspects of the filmmaking as well. What once was a bold-sounding, loudly- mixed and mastered score is dampened overtime for a set of notes and bars that are hypnotically docile. The shifts in tone are no longer accompanied by sharp changes in the score but are now uniformly strung together by forgettable beats and bland camera moves. Taxiwaala executes the shots which were earmarked on the storyboard as "special" with aplomb, but these glamour shots have little in terms of connective tissue. Like its lead character, Taxiwaala is a perennial under-achiever.

Vijay Devarakonda, as always, is easy on the eye, and his screen presence is unparalleled. His ability to draw focus onto himself even when placed smack-bang in the middle of a mediocre movie is a blessing to most filmmakers. However, he isn't a fully-formed actor just yet. The chinks in his armour are evident in scenes with him screaming in fear or bursting out in an outpour of emotion. Magnetism is a double-ended horseshoe.

His sidekicks played by the effervescent duo of Madhunandan and Vishnu are delightful, but once the trio of troublemakers is removed from the screen, the supporting cast just isn't compelling or intentionally comical enough.

And as we have discovered time and time again, mixing weak characters with a film that is walking the tightrope of horror-comedy is akin to mixing kerosene with petrol. Even if the driver doesn't see mushroom clouds of smoke this unholy combination generates, the mass of humanity following him are more than privy to the ill-effects. Some will be indifferent and some will vehemently complain, but most with get on with their day as if nothing out of the ordinary has happened. Taxiwaala hopes you are of the third kind.
Share. Save. Connect.
Tweet
TAXIWAALA SNAPSHOT 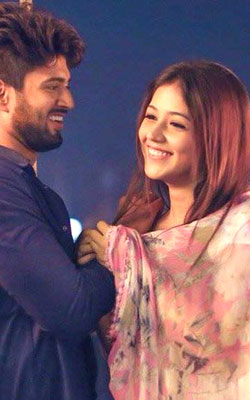 See Taxiwaala full details
TAXIWAALA USER REVIEWS
1 - 3 OF 3 COMMENTS
POSITIVE  |  NEGATIVE |  NEWEST  |  OLDEST  |  MOST HELPFUL  |  LEAST HELPFUL
prabhu on 26th Nov 2018, 4:34pm | Permalink
It is just the copy of hollywood movie "Astral".
Sarathi on 22nd Nov 2018, 10:14am | Permalink
Nice movie without logic. We can enjoy the movie provided we don't ask for the logic. Entire second half is mindless. The concept of Astral projection is good, but how did the soul know about her mom, when it is not completely converted in to soul. How can the soul go back and see, unless it meets the soul of her mother? How did the professor knows about the other characters, even the hero? The soul did not tell them. The soul goes in to the body of the new born's body which was born with chromosomal deficiency. Can the soul repair the chromosomal deficiency which is a physical disorder? Once the soul enters in to a body, it will not have any supernatural powers but simply becomes a new life which starts from level zero and it has to live with the same chromosomal deficiency. Leaving such scientific points to God, if you would like to enjoy your 2:30 hours from your busy and hectic schedules, the movie is worth a watch. Being a scientist, I do not appreciate the scientific content, but as a regular movie goer I liked the movie.
chaitu on 20th Nov 2018, 2:53pm | Permalink
Nice review. Great choice of words. Got a very different reading exerience.
LEAVE A COMMENT
fullhyd.com has 700,000+ monthly visits. Tell Hyderabad what you feel about Taxiwaala!
MORE MOVIES
Latest Reviews
Dhaakad
Bhool Bhulaiyaa 2
Dhagad Saamba
Shekar
Jayeshbhai Jordaar
more
Sarkaru Vaari Paata
Doctor Strange In The Multiv...
Ashoka Vanamlo Arjuna Kalyan...
Runway 34
Heropanti 2
Acharya
Kanmani Rambo Khatija
Jersey (Hindi)
K.G.F. Chapter 2
Beast (Telugu)
Contemporary Reviews
Sharabha
Robin Hood (2018)
24Kisses
2.0
2.0 (Hindi)
more
2.0 (Tamil)
Creed 2
Amar Akbar Anthony (Telugu)
Thugs Of Hindostan (Telugu)
Thugs Of Hindostan
Sarkar (Tamil)
Sarkar (Telugu)
Adhugo
The Nutcracker And The Four ...
Random Reviews
Ganapati
Athanu
Police Dog
Villain
Chronicles Of Narnia: The Li...
more
Hot Girls
Joru Ka Ghulam
Love Story 2050
Acid Factory
Rakta Charitra 2 (Hindi)
The Muppets
The Impossible
Aata Arambham
Mumbai 125 KM
Gaali Sampath
SEARCH MOVIES
Dissatisfied with the results? Report a problem or error, or add a listing.
ADVERTISEMENT
SHOUTBOX!
{{todo.name}}
{{todo.date}}
[
ip{{todo.ip}}
]
{{ todo.summary }}... expand »
{{ todo.text }} « collapse
First  |  Prev  |   1   2  3  {{current_page-1}}  {{current_page}}  {{current_page+1}}  {{last_page-2}}  {{last_page-1}}  {{last_page}}   |  Next  |  Last
{{todos[0].name}}

ADVERTISEMENT
This page was tagged for
Taxiwaala telugu movie
Taxiwaala reviews
release date
Vijay Devarakonda, Priyanka Jawalkar
theatres list
Follow @fullhyderabad
Follow fullhyd.com on
About Hyderabad
The Hyderabad Community
Improve fullhyd.com
More
Our Other Local Guides
Our other sites
© Copyright 1999-2009 LRR Technologies (Hyderabad), Pvt Ltd. All rights reserved. fullhyd, fullhyderabad, Welcome To The Neighbourhood are trademarks of LRR Technologies (Hyderabad) Pvt Ltd. The textual, graphic, audio and audiovisual material in this site is protected by copyright law. You may not copy, distribute, or use this material except as necessary for your personal, non-commercial use. Any trademarks are the properties of their respective owners. More on Hyderabad, India. Jobs in Hyderabad.