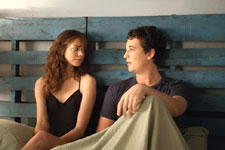 Swayamsrestha Kar / fullhyd.com
EDITOR RATING
5.5
Performances
Script
Music/Soundtrack
Visuals
6.0
4.0
5.0
6.0
Suggestions
Can watch again
No
Good for kids
No
Good for dates
No
Wait to rent it
Yes
There are times during Two Night Stand when you can't help but go "now where have we seen/heard that before?" The answer is, "Everywhere!" Though the film obviously wants to come across as an intelligent take on rom-coms, where it fails in doing just that is the fact that there are so many movies out there which have already tried doing just that, and in all fairness, have succeeded much better.

It's easy to completely understand Hollywood's obsession with trying to distill and portray, in its entirety, the thoughts of the new generation on matters of love and sex. The most definitive characteristic of the people of this era is that they (we) are rather confused most of the time (it's dicey using the phrase "existential crisis" because the typical reaction to that level of discourse would generally be along the lines of "Lol wut?!!"), but when it comes to the delicate workings of the heart, it sometimes may not be enough to just change one's FB status to "It's Complicated".

Megan (Annaleigh Tipton) is freshly out of college and has been freshly dumped by her long-term boyfriend. When her flatmate suggests that she try experimenting by having a one-night-stand with a random stranger from the Internet, the shy, stuttering Megan goes "what the heck!" and decides to go for it. She meets a guy called Alec (Miles Teller) on an online dating website and they decide to hook up for a night.

The phrase "no strings attached" is writ large and bold on this whole transaction. Though they indulge in witty verbal repartee, they remain largely distanced the whole time, even during the coitus. It has all the markings of a less-than-casual fling, the kind that ideally ends with a shared breakfast. But then, the movie is called "Two" Night Stand.

The morning after is seldom as nice as the night before, and both Megan and Alec realise this when innocent bed-bound conversation turns prickly, and suddenly they discover that they actually don't like talking to each other. Megan does try to make a dramatic exit, but her efforts at marching proudly (and disdainfully) out of the door are foiled by a snowstorm that has hit Brooklyn and confined all residents to their houses for the day. Megan and Alec find themselves in what has got be a terribly uncomfortable situation. How they resolve their petty animosities and finally reach a resolution of some sorts is what comprises the rest of the movie.

Only, the resolution is disappointingly clichéd, and after a while the dialogues start to sound like ones you have heard numerous times in other movies. The part where both are exchanging comments about each other's coital talents is both funny and cringe-inducing. And the scene where a stoned Megan looks Alec dead in the eye and says "If you see me dancing, you will want to follow me around like a puppy", is both endearing and unbearably corny.

And therein lies the rub of the matter. The movie keeps oscillating between being smart and being smartass, and after a while it altogether crosses that dreaded threshold into being annoying.

Megan's character is obviously the better sketched-out one, and Annaleigh Tipton portrays it quite charmingly. She looks as cute as a button, and you can't help but feel like giving her a big warm hug. She looks like she could use it. Alec, on the other hand, comes across as a typical arrogant slob, a "dude" who is unnecessarily sarcastic and, at times, even obnoxious. To be fair, though, Miles Teller tries to infuse the character with some warmth.

Another major drawback for the film is that though the lead characters share some kind of chemistry, there is a serious lack of sexual tension between them, and this kind of cripples the narrative impact of the movie as the premise itself relies heavily on it.

There is a certain something about the film, an aspect of je ne sais quoi which keeps it from being mind-numbingly dull. It's hard to pin it down, but it's still not reason enough to go watch it on a sunny weekend.
Share. Save. Connect.
Tweet
TWO NIGHT STAND SNAPSHOT 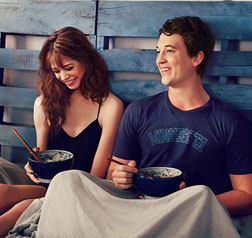 ADVERTISEMENT
This page was tagged for
Two Night Stand english movie
Two Night Stand reviews
release date
Analeigh Tipton, Miles Teller
theatres list
Follow @fullhyderabad
Follow fullhyd.com on
About Hyderabad
The Hyderabad Community
Improve fullhyd.com
More
Our Other Local Guides
Our other sites
© Copyright 1999-2009 LRR Technologies (Hyderabad), Pvt Ltd. All rights reserved. fullhyd, fullhyderabad, Welcome To The Neighbourhood are trademarks of LRR Technologies (Hyderabad) Pvt Ltd. The textual, graphic, audio and audiovisual material in this site is protected by copyright law. You may not copy, distribute, or use this material except as necessary for your personal, non-commercial use. Any trademarks are the properties of their respective owners. More on Hyderabad, India. Jobs in Hyderabad.