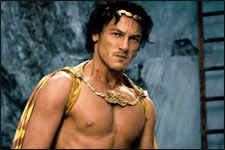 Nupur Barua / fullhyd.com
EDITOR RATING
4.0
Performances
Script
Music/Soundtrack
Visuals
6.0
5.0
7.0
7.0
Suggestions
Can watch again
No
Good for kids
No
Good for dates
No
Wait to rent it
Yes
Tarsem Singh was adamant about the release date for his 3rd feature film, Immortals, if the "11.11.11" (formed from the title) in the promos are any indication. Not to stress his superstitious nature, if any, but he could have released it whenever he wanted and still not managed to best his first 2 movies. Immortals, in fact, joins the list of this year's not-so-great-but-much-hyped Hollywood releases in India.

To begin with, Tarsem seems to work best in the realm of the surreal (refer to his two features - The Cell and The Fall). His visual aesthetics are unparalleled in that genre, but, unfortunately, not necessarily apt for a Hollywood mythological fantasy.

Secondly, this is Greek mythology he is dealing with. Admitted that the story and the characters have been rehashed conveniently ("creative liberty") to suit a movie that aims to put 300 to shame (and nobody is going to sue the makers for that), but we have had more than our fair share of various versions of Zeus in the past one year or so. So, unless Hollywood gives us a stunning, alternate perspective on the lives of those vain and moody beings that live in the skies, there seems to be no reason to rush to the theatres (in India, at least, since we have countless versions of our own sky people).

Theseus (Henry Cavill) is the illegitimate son of Aethra, who lives in this secluded Greek village in the mountains. Nobody is too sure who his father is, but, according to mythology, Aethra conceived him after sleeping with two Gods in one night - Aegeus and Poseidon (ancient Gods were as human as they come).

When he was a young boy, Theseus was taken under the wings of somebody he called the "Old Man" (John Hurt). This veteran taught him everything he needed to know about the art of warfare. An atheist, Theseus does not speak to too many people, and likes his quiet life with his mother in their little white house carved out of the mountain (the reluctant hero, a theme done to death).

In the meantime, the tyrannical Hyperion (Mickey Rourke) is on a mission to find the Epirus bow that can free the chained Titans. Eons ago, there was a war of the Gods - the victors were the Olympians, who now live in the heavens, and the vanquished were the Titans, who were imprisoned forever. If the Titans are ever released, then humanity is at risk (so you know now where Theseus comes in).

Hyperion pillages and rapes his way across the country, looking for the Virgin Oracle with visions of the future, Phaedra (Freida Pinto). He finds 4 women (of 4 different ethnicities, mind) known as the Oracles, who refuse to reveal the gifted one amongst them. Phaedra escapes and becomes a part of the small team that Theseus is leading to stop Hyperion.

A love story amongst all that action is predictable, but it must be mentioned here that if Phaedra loses her virginity, then she loses her powers, too (oh no!), and of course, she has the hots for Theseus.

So, armed with this rather humdrum plot, Tarsem uses every trick in the book to make the movie exciting, and fails. His aim was to make "a hardcore action film in Renaissance painting style", and some visuals are stunning, agreed, but there is nothing new for the VFX buff.

Heads lopped off in slow motion, testicles broken with an oversized hammer, limbs detached with one swift blow, blood spurting from various parts of the body, high jumps in the air to intimidate enemies during action, spears going in through the throat and out of the skull - been there, seen all that. Also, the relationship between Zeus (Luke Evans) and his daughter Athena (Isabel Lucas) needs clarity.

Henry Cavill, the next Superman apparently, is wooden (which is great for his Clark Kent role). He is a sincere actor, with a great body and even better looks, but he has no talent (as opposed to the delicious Gerard Butler in 300). As a superhero, he could have been portrayed slightly more intelligently.

Freida Pinto is no better. Her British accent, used in a couple of movies now, is not convincing enough. Also, she manages to look unappealing, despite the heavily-kohled eyes, heaving bosom and sex scenes. With irrelevant dialogues like, "The Gods have chosen well", she comes across as pallid and lifeless.

Mickey Rourke did his best in Sin City, and that role of a lifetime will be slightly difficult to beat. He growls menacingly, eats savagely and kills with pleasure, but he tries too hard. That ridiculous head gear makes him look more like a stuffed crocodile than a tyrant who is out to destroy mankind.

Production design is heavily inspired by 300, and work by artists on deviantart. There is nothing original, or even alluring, whether it is the scenery or the costumes. The CG is easily discernible, and some scenes look positively patchy. The Gods in their golden costume is an interesting touch, though, but they could have done away with the weird headgear.

Immortals is nothing more than fan art by a 300 enthusiast, made with $80 million. Skip this one.
Share. Save. Connect.
Tweet
IMMORTALS (3D) SNAPSHOT

ADVERTISEMENT
This page was tagged for
Immortals (3D) english movie
Immortals (3D) reviews
release date
Henry Cavill, Stephen Dorff
theatres list
Follow @fullhyderabad
Follow fullhyd.com on
About Hyderabad
The Hyderabad Community
Improve fullhyd.com
More
Our Other Local Guides
Our other sites
© Copyright 1999-2009 LRR Technologies (Hyderabad), Pvt Ltd. All rights reserved. fullhyd, fullhyderabad, Welcome To The Neighbourhood are trademarks of LRR Technologies (Hyderabad) Pvt Ltd. The textual, graphic, audio and audiovisual material in this site is protected by copyright law. You may not copy, distribute, or use this material except as necessary for your personal, non-commercial use. Any trademarks are the properties of their respective owners. More on Hyderabad, India. Jobs in Hyderabad.