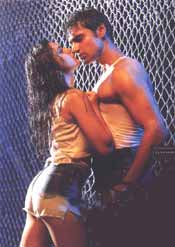 Mithun Verma / fullhyd.com
EDITOR RATING
1.0
Performances
Script
Music/Soundtrack
Visuals
NA
NA
NA
NA
Suggestions
Can watch again
NA
Good for kids
NA
Good for dates
NA
Wait to rent it
NA
The cupid guy is getting ever so freaky in the minds of scriptwriters these days. The very first time the lead couple meet in this flick, they 'accidentally' almost French each other. This is at the very beginning, and perhaps is a gesture by the filmmakers to warn the patrons of the many gruesome things to come. But unlike others, reviewers are underprivileged and have to watch on. So here's the dross tale.

Karan and Pooja are belting out duets while Aapmesh (Aditya Pancholi) and Vikram (Rajat Bedi) are scheduling a major techno-gizmo hijacking. The latter two end their preparations for the hijacking just as we are fainting with the over dosage of the sweet 'nothings' of our lover fowls.

There seems to be no connection between the romance sequences and the hijack sequences at all till this point, and the movie is like watching a bat and a ball separately - you can sense their meeting at some point and then perhaps it'll be fun.

However, did our Hindi directors ever let us have a peaceful game? In that view, sometime later we find Pooja trapped in a hostage situation in a Boeing with the terrorists demanding the release of a kingpin of their outfit, a la the Kandahar hijacking of the Indian Airlines Boeing.

While the real hijack didn't have any valiant adolescents showing the common sense to knock down the entire breed of terrorists barehanded, the movie of course has a mortal matching those very specifications. Likewise, the hero gives one my-dad-was-a-pilot-so-I-can-get-into-the-plane-through-the-cargo-spacing look, and impulsively plans his rescue operation. With the help of an unsuspecting Sardarji, he climbs into the Boeing through a fuel tanker. And yes, we double-checked; it wasn't Sunny in that turban.

So with countless skills like dodging bullets fired from an AK 56 from point blank range etc., he rescues the plane. The terrorist outfit forfeits jihad and comes full-fledged after the hero for saving the heroine (and the others in the process). He obviously terminates them too, and at the very end, gets back to the duets again.

The blending of a love story into an adventure drama in the movie is unspeakably mundane. Actually, to single out and mention any part of the film would be time consuming and unfair. It totally and wholeheartedly sucks. But the newcomers Karan (from Paagalpan) and Jivida (Aishwarya's sister in Taal) are decent enough to start acting in real movies.

It's better to sit at home and watch reruns of commercials than even thinking of watching this.
Share. Save. Connect.
Tweet
YEH DIL AASHIQANAA SNAPSHOT

ADVERTISEMENT
This page was tagged for
Yeh Dil Aashiqana full HD video song
Yeh Dil Aashiqanaa full movie in hd
yeh dil aashiqana full hindi movie
yeh dil aashiqana full movie
yeh dil aashiqana full hd movie
Follow @fullhyderabad
Follow fullhyd.com on
About Hyderabad
The Hyderabad Community
Improve fullhyd.com
More
Our Other Local Guides
Our other sites
© Copyright 1999-2009 LRR Technologies (Hyderabad), Pvt Ltd. All rights reserved. fullhyd, fullhyderabad, Welcome To The Neighbourhood are trademarks of LRR Technologies (Hyderabad) Pvt Ltd. The textual, graphic, audio and audiovisual material in this site is protected by copyright law. You may not copy, distribute, or use this material except as necessary for your personal, non-commercial use. Any trademarks are the properties of their respective owners. More on Hyderabad, India. Jobs in Hyderabad.