Jack Sparrow (Johnny Depp) - beg your pardon, Captain Jack Sparrow - is in line for the best pirate of the year award. Captain Barbosa, though, has other plans. He leads a mutiny on the ship 'The Black Pearl', and overthrows him. Now, this Black Pearl is not your regular everyday pirate ship. In its heyday, it could give the USS Enterprise a run for its money. Of course, the USS Enterprise was still nine hundred years away then. With this ship, Barbosa amasses a huge treasure. 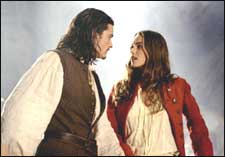 We have William Turner who was rescued by Elizabeth Swan (Keira Knightley), the Governor's daughter, about eight years ago. She had found a pirate medallion around his neck, which she hid so that his life is spared. It turns out that this medallion is one of 882 identical Cortez medallions. These were stolen a long time ago by Barbosa and his men. Now they are under a curse - immortality. They now start returning the medallions to the box where they stole it from. The last piece is with Ms. Swan.

Captian Barbosa takes Ms. Swan hostage. When Turner finds out that the Royal Navy is not going to rescue his flame, he turns to Sparrow for help. Sparrow accepts. Why wouldn't he? He got free from the prison in return. Not a bad deal, eh? So, they assemble a crew, attack the Black Pearl, rescue the Governor's daughter, Sparrow gets the Black Pearl, and Ms. Swan becomes Mrs. Turner. 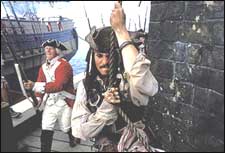 The film has a great background score that gels well with the story and the situations. The cinematography is magnificent, too. All actors have made the best use of whatever scope was available to them. None as well as Knightley, though - especially when she had to cast her feminine spells. All other factors - direction, editing, scripting, et al - are as good as one would expect of a Jerry Bruckheimer production. But originality is a completely different aspect altogether, and that is why the film gets as low a rating as this.

Plagiarism in itself is not peccant. After all, there are only so many stories that exist, and all films are worked around them. What sets the good ones from the rest is just this - the audience not being able to figure out where they saw that one before.

There even are places where ideas have completely disappeared

Well, in Hollywood they haven't had them for years! 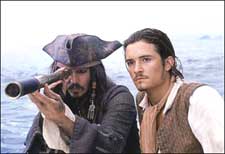 ADVERTISEMENT
This page was tagged for
Hollywood movie samander lutere
samundar ke lootere Jack Sparrow. xxx. HD. Hindi
samadra ka lutere jack sparro movie hindihot sex
samunndar ka lutera jackiparo movie Hindi
Hollywood movie Samundri Lootere Hindi movie
Follow @fullhyderabad
Follow fullhyd.com on
About Hyderabad
The Hyderabad Community
Improve fullhyd.com
More
Our Other Local Guides
Our other sites
© Copyright 1999-2009 LRR Technologies (Hyderabad), Pvt Ltd. All rights reserved. fullhyd, fullhyderabad, Welcome To The Neighbourhood are trademarks of LRR Technologies (Hyderabad) Pvt Ltd. The textual, graphic, audio and audiovisual material in this site is protected by copyright law. You may not copy, distribute, or use this material except as necessary for your personal, non-commercial use. Any trademarks are the properties of their respective owners. More on Hyderabad, India. Jobs in Hyderabad.