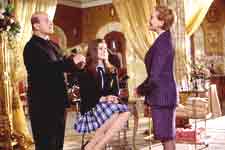 Siddhartha Kongara / fullhyd.com
EDITOR RATING
7.0
Performances
Script
Music/Soundtrack
Visuals
NA
NA
NA
NA
Suggestions
Can watch again
NA
Good for kids
NA
Good for dates
NA
Wait for OTT
NA
The Princess Diaries is about every young girl's dream coming true, mostly because it spends a whole 90 minutes portraying that ultimate employment opportunity of all - being a royal. Where else can you do so well for yourself without possessing any skill whatsoever?

Amelia (Mia, played by Anna Hathaway), a 15-year-old mass of curly hair, bony knees and nerves, is growing up in San Francisco with her mother, an artist. Mia has a very vague idea about who and where her father is.

Now Mia and her friend Lily, both of who are about as coordinated as the thought process of a boy band and as fashion-conscious as Bappi Lahiri, have a sort of pact to stay the way they are and not try to fit in. A commendable excuse to not comb their hair and trim their eyebrows. The only thing you can really like about Mia is her taste in cars - she drives a Mustang.

All this is working fine - until one day her grandmother shows up. Apparently Mia is the daughter of the late lamented crown prince of "some place", and with the death of her father, is now heir to the throne.

After a lot of family drama, Mia agrees to go through with finishing school - dadiamma style - in order to get ready for a fancy ball. If you've seen "My Fair Lady", it is interval time already. The prep for the ball is the usual training in posture, gait, taste, manners, dancing etc., and comes complete with the mandatory French beautician who can transform any person into a totally different person. Fortunately, Mia retains her love for the Mustang.

After going through it all, however, Mia realizes that she is not really princess material after all, and warts out. As a parting gift, her grandma gives her a letter from her father. The contents of the letter inspire her to take up the challenge and agree to become the princess.

The film is quite well made, and stands out like a sore thumb among the several other very similar films that you have seen over the years. There are however a few places where the movie degenerates into utterly silly comedy, such as the people-falling-over-each-other-at-big-shot-dinner routine. Also worthy of dishonorable mentions are the traffic accident scene and the statue-breaking scene.

On the bright side, several characters are worth mentioning - notably the queen's bodyguard/chauffeur/secret lover, Joseph, and Mia's best friend Lily, who has her own cable talk show called "Shut Up and Listen" watched by all of twelve people. Also watch out for a nice version of "Stupid Cupid".

The film will broaden your horizons when you find that out there in San Francisco they eat something that looks exactly like a mirchi bajji. It will also enlighten you to know that at foreign balls and gala parties hosted by foreign monarchs the Indian Government is always represented by sardars who dress like Daler Mahendi.

You've seen movies like this a hundred times before and every idea in the flick is older than even monarchy, but it is still worth a watch because it is a nice stay, a good laugh and a breath of fresh air. Besides, it's not as if you were planning to study this week.
Share. Save. Connect.
Tweet
THE PRINCESS DIARIES SNAPSHOT

ADVERTISEMENT
This page was tagged for
The Princess Diaries english movie
The Princess Diaries reviews
release date
Anne Hathaway, Julie Andrews
theatres list
Follow @fullhyderabad
Follow fullhyd.com on
About Hyderabad
The Hyderabad Community
Improve fullhyd.com
More
Our Other Local Guides
Our other sites
© Copyright 1999-2009 LRR Technologies (Hyderabad), Pvt Ltd. All rights reserved. fullhyd, fullhyderabad, Welcome To The Neighbourhood are trademarks of LRR Technologies (Hyderabad) Pvt Ltd. The textual, graphic, audio and audiovisual material in this site is protected by copyright law. You may not copy, distribute, or use this material except as necessary for your personal, non-commercial use. Any trademarks are the properties of their respective owners. More on Hyderabad, India. Jobs in Hyderabad.