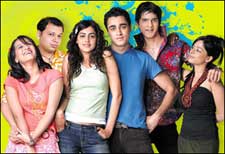 Krishna KBS / fullhyd.com
EDITOR RATING
7.0
Performances
Script
Music/Soundtrack
Visuals
7.0
5.0
7.0
7.0
Suggestions
Can watch again
Yes
Good for kids
Yes
Good for dates
Yes
Wait to rent it
Unsure
What is the most important component of a film? If you had said story, you would be wrong, for Jaane Tu Ya Jaane Na clicks despite its story. Boy meets girl. They become friends. They fall in love. But they cannot express it as they do not want to put an end to their friendship.

Gee, this is a story Romeo and Juliet must have listened to at their grandmom's knee while she forked into their yawning mouths pieces of bread and bacon. And we have watched similar, if not the same, stories unfold umpteen times in the movie halls. Tarun's debut movie Nuvve Kaavali being one that immediately springs to mind, as it managed to draw the maximum mileage out of this wafer-thin plot.

The plot, as we said earlier, is as old as the hills. It is basically a tale of a group of friends, with the love story of the protagonists being narrated by four of the friends to an uninterested stranger.

Jai Rathore (Imran Khan) and Aditi Mahant (Genelia D'Souza) are bosom buddies. Like self-respecting filmi friends, they care more for each other's well-being than for themselves. This goes to the extent where they try to hunt up a suitable partner for their friend. I do not know how many of you have done this, but heck, getting a mate for a person you love is the saddest thing on earth.

However, the lead pair does not feel it is heart-rending. Of course, they belong to the movie world, and well, they do not realize that they are in love with each other. So you have to wonder what they thought they felt for each other, if it was not love. Being in a state of denial is a nice thing if you are just denying the fact that you are bald or old, but denying that you are in love comes with its share of problems.

And hence, there are complications and complexities, the growing up of the protagonists, and realizationâ€¦ and if you have not watched films for a long time, you are left with bated breath and on tenterhooks to find out if their love is fruitful.

So like we all know, it is not the story that is the most important thing, but the manner in which it is packaged. In other words, screenplay. And Jaane Tu Ya Jaane Na gets it absolutely spot on with regard to this, with hardly a dull minute in the film. Though it is immensely helped by a liberal sprinkling of feelgood moments by the cast.

Genelia and Imran make a picture-perfect pair, and the good-natured give and take that they pamper us with in the movie is worth the price of the ticket any day. Genelia is her usual ebullient self, and though the Telugu viewers might have started finding her a tad monotonous, you can still watch her do her bit in a Hindi film. Imran is charming, and you are reminded of his uncle with his chocolate boy good looks, and ready and mischievous smile.

Even the others add to the charm of the movie - naive or otherwise. Pratiek Babbar, the son of Raj Babbar and Smita Patil, brings intensity to his role as the brother of the heroine, and his emoting is what we carry with us back home.

Add to it the music of A R Rehman, who even on his off days is way better than any other in the business. The peppy, zingy feel of a youthful romance are effectively conveyed through the soundtrack, and the picturization does not leave much to be desired or to the imagination.

The, the dialogues rock, and the editing is snappy - though one cannot but feel that the editor fell in love with the picture, and forgot to use his scissors in the second half. But then he might have slept off too.

Jaane Tu is not half as bad as the movies that are being churned out week in and day out by Bollywood, and if you are someone who is thankful for small mercies, this is perfect weekend movie for you.
Share. Save. Connect.
Tweet
JAANE TU YA JAANE... SNAPSHOT
JAANE TU YA JAANE NA SNAPSHOT

See Jaane Tu Ya Jaane Na full details
JAANE TU YA JAANE... USER REVIEWS
JAANE TU YA JAANE NA USER REVIEWS
1 - 6 OF 6 COMMENTS
POSITIVE  |  NEGATIVE |  NEWEST  |  OLDEST  |  MOST HELPFUL  |  LEAST HELPFUL
USER RATING
6.8
8 USERS
Performances
Script
Music/Soundtrack
Visuals
7.1
5.6
7.5
6.8
Can watch again - Yes
Good for kids - Yes
Good for dates - Yes
Wait to rent it - No
its_vinay on 4th Aug 2008, 9:28pm | Permalink
Movie is good but it is an old stuff for telugu audience.There were many movies with this type of story in telugu but for those who are not watched the telugu films for them it is nice and a decent flick.
The narration is some what slow in the second half and you might feel boredom at some instances.There is only one irritating character in the movie i.e airport girl and remaining all are done their job well.The comedy scenes between hero mom and Nassiruddin shah are very nice....good thought ..(but it reminds you a telugu flick GANGLEADER).

Over all movie is watchable and thanks to Amirkhan.

ST on 14th Jul 2008, 8:04am | Permalink
Wow, are we so starved for decent movies? All the review site elevated it to a classic - and it is just average...
RSX DUDE on 8th Jul 2008, 11:51pm | Permalink
the story is very old....but what makes this watchable is the presentation of the movie...the screenplay and the music are really good

RATING
7
Krishna on 7th Jul 2008, 9:21am | Permalink
The plot is taken from a superhit Malayalam film but none-the-less, it's an enjoyable offing thanks to very energetic performances by all.


Pros: Music
Cons: Certain portions of the 2nd half

RATING
7
RAJA on 6th Jul 2008, 5:14pm | Permalink
A much hyped movie-a huge disappointment with cliched,deja vu scenes all over and 2nd half is so lengthy u wud get restless..
we have seen this story b4 right from Niram in Malayalam-nuvve kavali in telugu-tujhe meri kasam in hindi...high society college kids'frendship n immature love...nuthing new nuthing gr8...may be some of u wud disagree wid me-feel free 2 mail me at urfren4evr@gmail.com if i hurt ur fellings by putting in this review of mine...

ADVERTISEMENT
This page was tagged for
Jaane Tu Ya Jaane Na hindi movie
Jaane Tu Ya Jaane Na reviews
release date
Imran Khan, Genelia D'Souza
theatres list
Follow @fullhyderabad
Follow fullhyd.com on
About Hyderabad
The Hyderabad Community
Improve fullhyd.com
More
Our Other Local Guides
Our other sites
© Copyright 1999-2009 LRR Technologies (Hyderabad), Pvt Ltd. All rights reserved. fullhyd, fullhyderabad, Welcome To The Neighbourhood are trademarks of LRR Technologies (Hyderabad) Pvt Ltd. The textual, graphic, audio and audiovisual material in this site is protected by copyright law. You may not copy, distribute, or use this material except as necessary for your personal, non-commercial use. Any trademarks are the properties of their respective owners. More on Hyderabad, India. Jobs in Hyderabad.