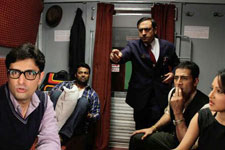 Nupur Barua / fullhyd.com
EDITOR RATING
5.0
Performances
Script
Music/Soundtrack
Visuals
6.0
4.0
6.0
5.0
Suggestions
Can watch again
No
Good for kids
No
Good for dates
No
Wait for OTT
No
Nobody knows quite where Leander Paes is going to end up as a tennis player, but now that he is in the news for his acting debut, all speculations regarding his other profession can be put on hold. The movie that launches him as an actor may or may not be remembered next weekend, but Paes may hang around tinsel town longer than Ajay Jadeja did, one predicts.

As the name, Rajdhani Express, suggests, most of the drama takes place in the Delhi-Mumbai train, specifically in the VIP section, or the first-class. For reasons best known to himself (interspersed with flashbacks that deal with a childhood sweetheart, childhood abuse, an orphanage, a Don, and the scheming daughter of the said Don), Keshav (Leander Paes), a scruffy young (!) man, is on the run. He carries a suspicious-looking backpack.

Keshav has a ticket to a four-seat compartment in the first-class bogie. He discovers that his travelling companions are a self-confessed plagiarising Bollywood scriptwriter named B B Banerjee (Priyanshu Chatterjee), a self-confessed hooker who is also an item girl, named Sunita (Puja Bose), and a self-confessed snob and fashion designer named Munish (Sudanshu Pandey). While the philosophy-spewing, leftist writer tries to make Keshav feel at ease, the other two passengers ridicule the brooding man's obvious lack of culture and poshness.

So Keshav, the man who is tired of being judged according to his social and economic status, finally loses it and takes out a gun. Viola! A hostage situation ensues, with the TTE (Gulshan Grover) playing the mediator (via cell phone) between the ATS and the terrorist. Mumbai DCP Yadav (Jimmy Sheirgill), who is "looking into" the situation, is a hardened, ambitious cop, and he has a bone to pick with the Home Minister (Ishrat Ali), whose parents are also on the train.

What happens next baffles the mind, and not in a good way. Ashok Kohli, who has written and directed the movie, obviously had a message that he wanted to put across to the nation, but somewhere down the line, he remembered all the other preachy elements that he ought to put in a movie like this - the result is a distorted, disjointed collection of montages and scenes that do not flow smoothly.

In other words, sketchy is an understatement for the script. Nobody knows quite what is happening, including the actors. Why is Keshav angry? (Refer to the desaturated flashbacks). And what is he doing? How does a couple have sex inside the loo of a train? Why does the saree-clad white woman (yes, there is one) offer medicine to Keshav? How does the ATS team enter the train without anybody else noticing their obvious presence? What is Keshav's problem? And what is Yadav's obsession with "ussko udaa do"?

Some of the sequences are unintentionally funny, especially when the actors perform in all seriousness. All of them, and the director, lose the plot within the first half hour of the movie, and after that, it becomes a free-for-all screenplay in which the only consistent factor is the overacting.

Leander Paes mumbles through most of the movie, when he is not trying to look intense and pained and angry. He could not have picked a worse movie to debut in, although he does play the lead role. Despite the limited scope of delivery, however, Paes shows a glimmer of promise.

Speaking of limitations, Puja Bose has three expressions that she uses to convey all of her emotions. Sudanshu Pandey fares slightly better, although he looks more like a fading model than a classy designer. Achint Kaur, who plays his sister, is too sincere. Ishrat Ali has a series of smart-alec dialogues that do not contribute to the story. And both Kiran Kumar and Sayali Bhagat need to sign deals that will give them more screen time.

The actors worth watching, therefore, are Mukesh Rishi (so serious), Gulshan Grover (with a UP accent), Jimmy Sheirgill with his scowling face, Shilpa Shukla with her intimidating presence, and Priyanshu Chatterjee, despite his outrageously fake Bengali accent (surprising, given his roots).

Costumes are a disaster. For all, except the TTE and Banerjee. Production design is a tad better. In fact, the opening sequence is pretty impressive, with some decent cinematography that attempts to set the tone of the movie. The music is pleasant.

Rajdhani Express begins with a narrator quoting the Preamble to the Constitution of India. This is the right time for a call to patriotism and to remind us of justice, liberty, equality and fraternity. If only the story were a little cohesive. Watch if you have no other movie to catch this weekend, and if you are curious about Leander Paes as an actor.
Share. Save. Connect.
Tweet
RAJDHANI EXPRESS SNAPSHOT 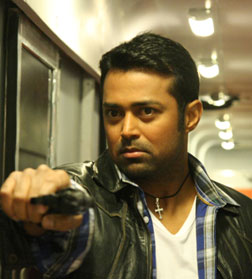 ADVERTISEMENT
This page was tagged for
Rajdhani Express hindi movie
Rajdhani Express reviews
release date
Leander Paes, Jimmy Sheirgill
theatres list
Follow @fullhyderabad
Follow fullhyd.com on
About Hyderabad
The Hyderabad Community
Improve fullhyd.com
More
Our Other Local Guides
Our other sites
© Copyright 1999-2009 LRR Technologies (Hyderabad), Pvt Ltd. All rights reserved. fullhyd, fullhyderabad, Welcome To The Neighbourhood are trademarks of LRR Technologies (Hyderabad) Pvt Ltd. The textual, graphic, audio and audiovisual material in this site is protected by copyright law. You may not copy, distribute, or use this material except as necessary for your personal, non-commercial use. Any trademarks are the properties of their respective owners. More on Hyderabad, India. Jobs in Hyderabad.