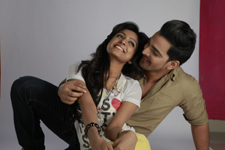 Kritika Deval / fullhyd.com
EDITOR RATING
6.5
Performances
Script
Music/Soundtrack
Visuals
7.0
6.5
8.0
7.5
Suggestions
Can watch again
Yes
Good for kids
No
Good for dates
Yes
Wait for OTT
No
What could a "rockstar", a college kid, an RJ, an IT professional, a small-town wannabe and a costume designer possibly have in common? Well, Love, actually; and just in time too for all the serial knot-tying going around in town.

As you may or may not have guessed from the obscurish reference in the previous sentence, Prema Ishq Kaadhal (PIK) is not one, not two, but three whole parallel love stories at the price of one, all meeting at only one, although how that makes them parallel needs to be taken up with the apparently math-illiterate makers.

And, so, you have Randy (Harshavardhan Rane) the rockstar philanthropist, and Sarayu (Vithika Sheru) the CA student; Harish (Harish Varma) the playboy RJ, and Shanti (Sree Mukhi); and finally, Royal Raju (Vishnu Vardhan) of Akividu, and Sameera (Rithu Varma) the city girl who seems to think of Raju as her pet pocket monkey.

All their lives are entwined in and around the sets of a film in the making, curiously without even one out of a twosome acknowledging the presence of anyone from the other pairs. The musings of a finicky mind aside; the film itself is a delight, portraying youthful romance with a rare restraint. They're all young and a little bit wild, but not one of them is unbalanced-ly so, which is shocking, considering the kinds of "youths filims" being made lately (think Bus Stop and its ilk).

The dialogue is peppy, the pace fast; especially in the first half, which is devoted to developing all three relationships, resulting in some very lovely chemistry. While the individual plotlines themselves are rather run of the mill, the culmination and the direction given it will surprise you. The second half is rather a drag, but the film picks up pace towards the end.

As far as the comedy part of rom-com is concerned, it is more situational than contrived, as nearly everything about the film is. What is contrived, you ask? Well, Finicky Mind says that there is no reason for an RJ to faff around on a film set the whole friggin' day, and that nobody on that film set ever seems to really be doing anything. Finicky Mind says lots of other things, but we're tuning it out (get it? get it? get it? Finicky Mind. FM. Tuning.).

Harshavardhan Rane looks good, and makes the best of his unidimensional role. Vishnu Vardhan and Harish Varma both have far more detailed characters, and do more than justice to them.

The girls have little else to do but look adorable, and do that with panache and confidence (we had to still our hands from involuntarily reaching into the screen to pinch Rithu Varma's cheeks!).

What makes the whole of it far more memorable is the eminently hummable soundtrack, and a camera guy who knows exactly what he wants and the most beautiful way to get it.

The unusual is unusual enough in Tollywood, but the fact that Prema Ishq Kaadhal is unusual made well should translate into reasonably full theatres, especially considering that there aren't too many big releases this week.
Share. Save. Connect.
Tweet
PREMA ISHQ KAADHAL SNAPSHOT 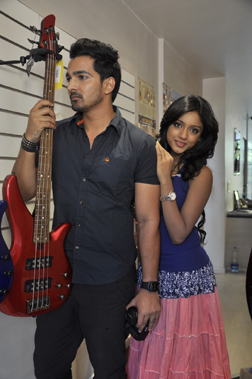 ADVERTISEMENT
This page was tagged for
Prema Ishq Kaadhal telugu movie
Prema Ishq Kaadhal reviews
release date
Harsh Vardhan Rane, Vishnu Vardhan
theatres list
Follow @fullhyderabad
Follow fullhyd.com on
About Hyderabad
The Hyderabad Community
Improve fullhyd.com
More
Our Other Local Guides
Our other sites
© Copyright 1999-2009 LRR Technologies (Hyderabad), Pvt Ltd. All rights reserved. fullhyd, fullhyderabad, Welcome To The Neighbourhood are trademarks of LRR Technologies (Hyderabad) Pvt Ltd. The textual, graphic, audio and audiovisual material in this site is protected by copyright law. You may not copy, distribute, or use this material except as necessary for your personal, non-commercial use. Any trademarks are the properties of their respective owners. More on Hyderabad, India. Jobs in Hyderabad.