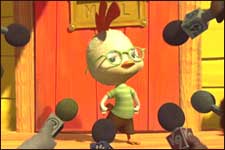 Ghazala Rizvi / fullhyd.com
EDITOR RATING
5.0
Performances
Script
Music/Soundtrack
Visuals
NA
NA
NA
NA
Suggestions
Can watch again
NA
Good for kids
NA
Good for dates
NA
Wait to rent it
NA
With more and more adults unashamedly being taken in by The Lion King, Shrek and Alladin, animation has certainly outgrown its utility as a kid-entertainer. But any flick from the wonder-world should necessarily be backed by excellent tech, and if possible, slapstick humor. Chicken Little scores high on first, but falls miserably in the other.

The movie targets audience which is well below 10 years old, and it is best watched with parents. More for the parent's benifit than the child's - Chicken Little is cute, but he deals with mature content. The flick is more melodramatic than humorous, and more about relationships than fun.

Oaky Oaks is the place where Chicken Little lives with his Pa, Buck Cluck, and goes to school with his friends, Fish Out Of Water and Runt Of The Litter. Life's cool and mundane, until one day, when all heaven's let loose. Like Chief Vitalstitistix's nightmare coming true, a piece of sky falls on the city. Chicken Little's initiative to save the city goes kaput when it's discovered that it was just an acorn which disloged from an elm tree, and not any piece of sky.

Chicken Little's life takes a downturn as he now has to bear the brunt of nerdy jokes wherever he goes - from internet humor to a prospective movie on the fiasco, and from school geek's pranks to his fathers' silent disapproval, Chicken Little goes through all the motions of a sad duckling.

What he wants is a chance to redeem his self-esteem, and his fathers' pride. And, chance he does get. From here, the story goes completely berserk, like any decent kiddie movie should. There are aliens, there are space-ships, and hints of planetary annihilation - and if our kids could uderstand the game, there is a whole episode of baseball bravado where Chicken little (barely able to lift the bat) scores a winner.

The movie scores high on its animation and visual content, but it's the story premise that you'll feel drawn out to. There are a few home-truths about parenting (like when Chicken Little accuses his dad of being with him only in his winnings but never when he's losing), and the movie is high on the bonding content, with friends and family.

Where it lags is in humor, in giving you the real kicks - almost as if the entire plot is deliberately slowed down, to emulate the very early Mickey Mouse era. Chicken Little is sweet with bespectecled emotive eyes (though, you wonder how he could portray helplessness, love, determination and resolve, all through the 2-cute buttons that he has for eyes).

The music is hep, though mostly un-origial, but it works towards maintaiing the light pace of the story. You get to see a lot of characters, like Mayor Turkey Lurkey and Morkubine Porcupine, but their idiosyncrasies are never played well upon. Perhaps, that's the only glitch with Chicken Little - it has downplayed almost everything that could have been its highlight.
Share. Save. Connect.
Tweet
CHICKEN LITTLE SNAPSHOT

ADVERTISEMENT
This page was tagged for
Chicken Little english movie
Chicken Little reviews
release date
Zach Braff (Chicken Little), Garry Marshall (Buck Cluck)
theatres list
Follow @fullhyderabad
Follow fullhyd.com on
About Hyderabad
The Hyderabad Community
Improve fullhyd.com
More
Our Other Local Guides
Our other sites
© Copyright 1999-2009 LRR Technologies (Hyderabad), Pvt Ltd. All rights reserved. fullhyd, fullhyderabad, Welcome To The Neighbourhood are trademarks of LRR Technologies (Hyderabad) Pvt Ltd. The textual, graphic, audio and audiovisual material in this site is protected by copyright law. You may not copy, distribute, or use this material except as necessary for your personal, non-commercial use. Any trademarks are the properties of their respective owners. More on Hyderabad, India. Jobs in Hyderabad.