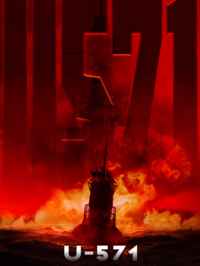 Christopher Domingo / fullhyd.com
EDITOR RATING
7.0
Performances
Script
Music/Soundtrack
Visuals
NA
NA
NA
NA
Suggestions
Can watch again
NA
Good for kids
NA
Good for dates
NA
Wait to rent it
NA
Historical facts have been changed. And the British must be fuming, and the Americans must be having a good laugh. This mission that made life easy for the allied forces during World War II was actually British, but it has been rather conveniently changed to American. The movie is faring well, though, so Jonathan Mostow couldn't care less. So does another World War II flick make you wince? Well, this may not be different, but is one of the better ones made to date.

The U 571 is a Nazi U-boat (a mini submarine) and it carried the dreaded encrypting machine 'the enigma' that intercepted messages of the Allied Forces and decoded them. This enabled the Germans to pinpoint most operations and thus, foil most missions. When one such U-boat is disabled in combat, an American submarine crew is sent out to capture it and take possession of the encrypter. The mission is given to Bill Paxton and his second in command Matthew McConaughey, and team of Jon Bon Jovi, Harvey Keitel and others. The mission goes according to plan, but all hell breaks lose when the American submarine is destroyed along with most of its crew.

A handful of these survivors has no choice but to use the U 571, and from here on begins their struggle to survive in German waters and deliver 'the enigma'. There are explosions, torpedoes and depth charges (a kind of explosives) all around, and the fear and courage of the desperate crew makes this movie worth a watch.

There are quite a few thrilling moments that will keep you on the edge of your seat. The narration is taut and engrossing, the acting excellent, and Jonathan Mostow's direction makes this a good movie to watch. This is not just for the war movie buffs but for all those who love a well made action thriller. And for all the Bon Jovi fans out there, sorry guys, the blaze of glory is very very brief.
Share. Save. Connect.
Tweet
U-571 SNAPSHOT

ADVERTISEMENT
This page was tagged for
U-571 english movie
U-571 reviews
release date
Matthew McConaughey, Jon Bon Jovi
theatres list
Follow @fullhyderabad
Follow fullhyd.com on
About Hyderabad
The Hyderabad Community
Improve fullhyd.com
More
Our Other Local Guides
Our other sites
© Copyright 1999-2009 LRR Technologies (Hyderabad), Pvt Ltd. All rights reserved. fullhyd, fullhyderabad, Welcome To The Neighbourhood are trademarks of LRR Technologies (Hyderabad) Pvt Ltd. The textual, graphic, audio and audiovisual material in this site is protected by copyright law. You may not copy, distribute, or use this material except as necessary for your personal, non-commercial use. Any trademarks are the properties of their respective owners. More on Hyderabad, India. Jobs in Hyderabad.