Bad boys, bad boys, watcha gonna do, watcha gonna do when they come for you... I'd say beat a hasty retreat, unless you dig racist remarks, blowing up klukkers, sexual comments on corpses, or the 'rhythmic' vibrations of the 'F' word - the king of all four letter words. 'Bad Boys I' made stars out of Will Smith and Martin Lawrence. Bad Boys II will ensure they remain stars - on the telly may be.

Now we come to the part where we tell you the story of the film. Well, solving the West Asian crisis is a lot easier than that. At least there you know the reason behind the conflict. I am still zapped as to why this film was made. All you see here are bullets flying all over the place, high-speed car chases, cacophonous shrieks of the two protagonists, and the abysmal failure of the intended humor. 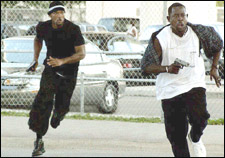 Mike Lowry (Will Smith) and Marcus Burnett (Martin Lawrence) are two hot shot cops in the Miami Police's Narcotics division. Johnny Tapia (Jordi Molla) is a Cuban drug lord, and their current target. Burnett's sis Sydney Burnett (Gabrielle Union) comes over from the DEA's office in New York, undercover, to apprehend the same guy, unknown to either Burnett or Lowry. Also, unknown to Burnett, Lowry and Sydney are seeing each other, but supposedly out of respect for his partner, Lowry 'does not do anything'. So, you know the usual situations that can arise out of this whole affair.

After about two hours of senseless mayhem, the bad guy manages to take Sydney hostage, and flees to Cuba. The oft repeated line 'United States does not negotiate with terrorists' is stated yet again. But, that is not going to stop our two heroes. They manage to assemble a team and hit Cuba.

What happens next is something we have been trained to expect from our desi Bollywood films starring Sunny baba. These two take on the might of the entire Cuban Army (a la Gadar?) and raze a settlement to ground. Wonder how many people they killed to save the life of one person. But, I guess, they thought, "Hey, they are Cubans!"

The film's direction made me look at the credits twice to convince myself that the director is indeed Michael Bay - the man who gave us Pearl Harbour. No effort has gone in making a fresh theme song, and the same can be said of the film's treatment, too. Some sequences are fast paced, but so fast that you do not even know what is happening or, more importantly, why it is happening. 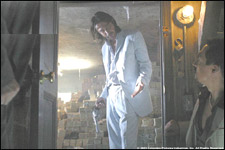 After about two and a half hours (it is that loooooooog!) when your ordeal finally ends, you wonder whether compared to this Bad Boys I is a classic. But then, there really is no point in wondering, is there? Other than the fact that you could have put those 30 bucks to good use in having a sumptuous Andhra Meal.
Share. Save. Connect.
Tweet
BAD BOYS II (HINDI) SNAPSHOT
See Bad Boys II (Hindi) full details
BAD BOYS II (HINDI) USER REVIEWS
1 - 1 OF 1 COMMENTS
POSITIVE  |  NEGATIVE |  NEWEST  |  OLDEST  |  MOST HELPFUL  |  LEAST HELPFUL
faiyazahmed on 15th Apr 2009, 2:02am | Permalink
its good and i like these guys

ADVERTISEMENT
This page was tagged for
bad boys 3 movie dubbed in hindi
bad boy 2 movie
boys 2 sexy Hindi
Bad boy 2 full movie Hindi
bad boys movie hindi dubbed
Follow @fullhyderabad
Follow fullhyd.com on
About Hyderabad
The Hyderabad Community
Improve fullhyd.com
More
Our Other Local Guides
Our other sites
© Copyright 1999-2009 LRR Technologies (Hyderabad), Pvt Ltd. All rights reserved. fullhyd, fullhyderabad, Welcome To The Neighbourhood are trademarks of LRR Technologies (Hyderabad) Pvt Ltd. The textual, graphic, audio and audiovisual material in this site is protected by copyright law. You may not copy, distribute, or use this material except as necessary for your personal, non-commercial use. Any trademarks are the properties of their respective owners. More on Hyderabad, India. Jobs in Hyderabad.