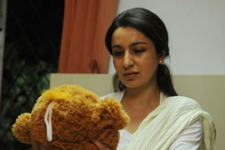 Swayamsrestha Kar / fullhyd.com
EDITOR RATING
4.0
Performances
Script
Music/Soundtrack
Visuals
5.5
4.5
5.5
6.0
Suggestions
Can watch again
No
Good for kids
No
Good for dates
No
Wait for OTT
Yes
In the monumental list of blunders that the makers of the movie Ankur Arora's Murder Case commit, the most glaring one would be that the film has been released around the same time as a certain other movie involving a stalwart Kryptonian destined to be the planet's savior. But wait, such a dangerous move would mean that the movie's producers were way too confident of the movie's strengths, right? Funny thing, pride. They say it goeth before a fall.

Vikram Bhatt should have learnt his lesson after penning scripts like that trainwreck Aetbaar (with John I-Will-Emote-As-Soon-As-I-Get-My-Facial-Muscles-To-Move Abraham as the psychopath loverboy), or Ankahee (which, admit it, you're trying hard to recall... lucky you). So, when he announced that he was going to make a movie about a true incident, the collective groan that went through Indian movie lovers could be heard till Kanyakumari.

However, we all heaved a sigh of relief when he appointed someone else to direct it (good thing too, remember that sensory-assault-fest called Shaapit?). And the director turned out to be Suhail Tatari. We know what you thought then - "Hate Story wasn't that bad... except all the obvious in-your-face misogyny". Well, Ankur Arora... is at least a notch better, we will give it that. But, that would be like saying "eating paani-puris and getting amoebic dysentery is still better than dying of hunger".

The movie starts off fairly well. Romesh (Arjun Mathur) is an intern at Sekhawat General Hospital. He is totally gay for the senior surgeon Dr. Asthana (Kay Kay Menon) (ok, not gay, but hero-worshipper). Words like "inspiration" and "guru" are liberally thrown around when Romesh is talking about his senior. Romesh's co-intern Riya (Vishaka Singh) is also his live-in partner (it's time we stop characterising this phenomenon as being "firangi", house prices are not what they used to be when our parents were young, you know).

Moving on, Dr. Asthana in the film is similar to the Dr. Asthana in Munnabhai MBBS. He is utterly confident of his healing prowess, thinks that the patient's family is vermin that has to be gotten rid of if he has to concentrate on his doctoring, and believes that the medical profession is as much about business as it is about playing Hippocrates' ideological descendant. It's a wonder that the patients don't get sicker when Dr. Asthana sweeps into the room.

One day, a young boy called Ankur Arora (Vishesh Tiwari) is admitted into the hospital as he is afflicted with appendicitis. His mother Nandita Arora (Tisca Chopra) has been unceremoniously dumped by her husband. The boy, due to the great, infallible Dr. Asthana's negligence, goes into a coma, and dies two days after. Momma dearest learns of the truth from Romesh, and sues the senior doctor for all he's worth. Promising stuff, right?

Well, almost. Nandita enlists the help of the lawyer Kajori Sen (Paoli Dam), who is involved in a torrid affair with the opposing lawyer (who, by the way, is married). Kajori gets pregnant, almost dies while trying to abort the baby, and comes back with a vengeance, determined to defeat her ex-lover in court. Sniff, sniff...smells like Hate Story.... and oh, wait Ankahee, too... and with hints of Bardaasht (common man fighting a system). Before we play the game of guess-the-ingredients, can someone please introduce Paoli Dam's characters to that wondrous thing called the average contraceptive?

The dialogues are the typical "mere pas maa hai" fare. Get this: in one scene, Kajori says this about Asthana - "Woh guilty hi nahi, par guneghar bhi hain". Talk about tautology.

The cinematography is adequate, with gory shots of the patient's entrails in the operating theatre. Someone went through some pain in order to pepper the script with medical jargon (we now know that "Myocardial Infarction" means "Shit-I-am-having-a-heart-attack").

The editing could have been a lot crisper. For instance, all those reels spent on establishing the plight of a single mother and all the needless sentimentalizing where the boy talks about how he would grow up to be filthy rich, and bury his mom under a pile of gifts, could also have been avoided. The film could actually have done with being more matter-of-fact than with all the trigger-happy crying (oxymoron, we know). The songs, thankfully, are not jarring, and "Tera Aks Hai" lingers on in your mind.

The cast fares marginally better. Tisca Chopra has cemented her place as the worried mother of the young boy (what with playing mommy to the buck-toothed, dyslexic wonder kid in Taare Zameen Pe). The scene where she discovers that her son is dead will break a heart or two. Indeed, it is that one moment in the film where we realise how we always treat Death as something that happens to others, and that the enormity of it is never fully realised till it's us or someone we love, on the deathbed.

Arjun Mathur also does commendably well, given the fact that his character is decidedly flat and insipid to begin with. Vishaka Singh needs to learn how to enact emotional scenes better, and Paoli Dam should lose the eye-makeup. Kay Kay Menon delivers a riveting performance, but it is definitely not amongst his best.

At the end, you are left with a sense of frustration - the kind which you experience when your tangdi kebab ends up being ALMOST delicious because of some idiot who doused it with too much chutney. Suhail Tatari should have just stuck to directing episodes of "Surabhi".
Share. Save. Connect.
Tweet
ANKUR ARORA MURDER CASE SNAPSHOT 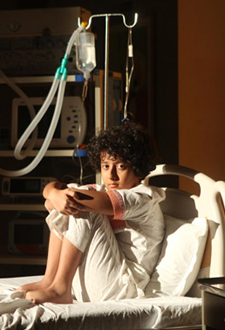 ADVERTISEMENT
This page was tagged for
Ankur Arora Murder Case hindi movie
Ankur Arora Murder Case reviews
release date
Kay Kay Menon, Paoli Dam
theatres list
Follow @fullhyderabad
Follow fullhyd.com on
About Hyderabad
The Hyderabad Community
Improve fullhyd.com
More
Our Other Local Guides
Our other sites
© Copyright 1999-2009 LRR Technologies (Hyderabad), Pvt Ltd. All rights reserved. fullhyd, fullhyderabad, Welcome To The Neighbourhood are trademarks of LRR Technologies (Hyderabad) Pvt Ltd. The textual, graphic, audio and audiovisual material in this site is protected by copyright law. You may not copy, distribute, or use this material except as necessary for your personal, non-commercial use. Any trademarks are the properties of their respective owners. More on Hyderabad, India. Jobs in Hyderabad.