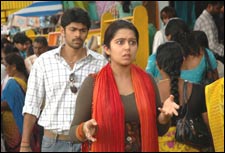 Deepa Garimella / fullhyd.com
EDITOR RATING
6.5
Performances
Script
Music/Soundtrack
Visuals
6.0
7.0
7.5
4.5
Suggestions
Can watch again
Yes
Good for kids
Yes
Good for dates
Yes
Wait to rent it
No
Manorama does not paint the flawless picture we would have loved to have in place of the Gokul tragedy, but it is almost there. And it is not completely off the mark in showing us the inevitable that is bound to happen some day - Sylvester's fallen in love with Tweety.

Gitanjali (Charmme) comes visiting to Hyderabad and puts up at a friend's, from where she lets us know through a towel-wrap song, that she loves life and likes to spread cheer all around. As she plays pry-eye with a pair of binoculars - the busy street under her balcony is what catches her fancy - her lip-reading skills cause her to alarmedly get onto the street to save the life of one of the objects of her purview.

Entangled in this proactive display of philanthropy is a man (Nishan) who has just left a time bomb inside an immensely popular eatery, Hotel Manorama, on that very street. He falls in love with Gitanjali at first sight, and he wants her nowhere near Manorama. He has another reason to have butterflies inside - it's his first bomb.

Manorama is a labour of love, and it shows. The patiently detailed set-up of situations, the joie de vivre of the protagonist, and the delicate blossoming of the romance. Perhaps its greatest strength is its refusal to judge any character. It doesn't even go there; the film wins you over because of its guileless, sincere questions about why man takes death - his own or that of his fellow human beings - into his own hands.

Sure, there are flaws. For the first half an hour, nothing moves, and Gitanjali's exuberance seems overdone at times. Certain irrelevant characters, like the goons who eat endlessly, can get on your nerves. Then there is that enormous question mark - why would a man who plants a bomb make himself so conspicuous to this woman, or even do things like massively tipping the kid who waits at his table? And like we said, the resolution is not flawless, and even quite simplistic, leaving you to answer your questions yourself. But the film is engaging, retaining a sense of urgency all the while, and some of the lines prompt applause.

Charmme carries this film well despite the bubbly overflowing. It is a role that ought to prompt an award nomination or two. Nishan takes on that dispassionate look that killer-heroes usually have, signifying deep conflict within, and is quite good. The chemistry is touching - it is so easy to see why this brooding, weighed-down young bloke falls in love with such a picture of cheer and warmth as Gitanjali.

Ali and M S Narayana have brief appearances and draw out some chuckles, and there is a general light-heartedness about the film anyway. All the other performances are good, too.

The visuals are lacklustre, but with its being set in a restaurant, Manorama doesn't let up on the plates of ragda samosa (it's real, too) being passed around. The street set is charming as well, and there are a few well-shot scenes in a park. As for the music, the soundtrack starts off in a suspense-filled mode and eases away. Then, there's also a beautiful romantic number that runs through the film, in bits and pieces.

This deglam film definitely deserves a watch; and deserves much more attention than most films much lower in intent manage to garner.
Share. Save. Connect.
Tweet
MANORAMA SNAPSHOT

ADVERTISEMENT
This page was tagged for
Manorama telugu movie
Manorama reviews
release date
Charmme, Nishan
theatres list
Follow @fullhyderabad
Follow fullhyd.com on
About Hyderabad
The Hyderabad Community
Improve fullhyd.com
More
Our Other Local Guides
Our other sites
© Copyright 1999-2009 LRR Technologies (Hyderabad), Pvt Ltd. All rights reserved. fullhyd, fullhyderabad, Welcome To The Neighbourhood are trademarks of LRR Technologies (Hyderabad) Pvt Ltd. The textual, graphic, audio and audiovisual material in this site is protected by copyright law. You may not copy, distribute, or use this material except as necessary for your personal, non-commercial use. Any trademarks are the properties of their respective owners. More on Hyderabad, India. Jobs in Hyderabad.