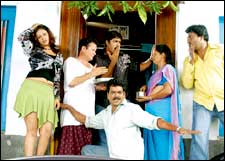 Indu Gopoji / fullhyd.com
EDITOR RATING
3.0
Performances
Script
Music/Soundtrack
Visuals
NA
NA
NA
NA
Suggestions
Can watch again
NA
Good for kids
NA
Good for dates
NA
Wait to rent it
NA
If you're willing to accept a very contrived plot, clichéd characters and a script that gives you a feeling of déjà vu, then Kanchanamala Cable TV offers you plenty of opportunities to try the smug face punctuated with feeble attempts at laughter.

Sudarshan (Srikanth) launches a cable TV company in the memory of his childhood sweetheart Kanchanamala, who has been missing for more than 14 years. Apart from the regular 100 channels that are available, he channels a program that telecasts the current happenings of the village, which consist mainly of the illegal activities of the baddies in and around the village. This lands him in the bad books of the bad boys.

Alongside, Kanchanamala's parents haven't given up the hope of finding their daughter, and never quit their attempts to find her. In this pursuit, the mother loses her health, and the father his peace.

Sirisha is an ambitious career woman who dreams of landing in the US, and lands herself in this village. She pretends to be the lost Kanchanamala (with a little homework and financial aid from the father), and finally comes to the rescue of the ailing mother. Sudharshan mistakes her for his sweetheart and falls in love with her. The rest is predictable.

The movie lacks the important ingredient of story-telling - an innovative story. It reeks of clichés and horse sense, which rub on to the moviegoers as they end up leaving the hall with a more than strong stench of boredom.

After award winning performances in comic roles, Sunil's flair for humor in this flick does not even score 2/5. Yes, screenplay is not the only thing that goes wrong. The townsfolk should be lauded for their industrious efforts to look out of place, thanks to their designerwear. Lakshmi Roy is sure to go places, and the first stop we recommend is a good lingerie store. The director must have convinced her of this venture being a good career move. He just did not point out the direction.

The performances in this movie are directly proportional to the things we have to say about them - nothing. The movie seems to have worn out on me, especially because I have effortlessly managed to blot it off my memory even before I had the chance to greet the afternoon sun.

The songs might actually help you sail through the film if you resist the temptation of opening your eyes. This flick does not feature in a 10-mile radius of awards or nominations, but if you don't have a life, then you should pen this goofy little bore bucket down in your purchases list.
Share. Save. Connect.
Tweet
KANCHANAMALA CABLE TV SNAPSHOT

ADVERTISEMENT
This page was tagged for
kanchanamala cable tv review
kanchana mala Srikanth Telugu movie
Kanchanamala Cable TV telugu movie
Kanchanamala Cable TV reviews
release date
Follow @fullhyderabad
Follow fullhyd.com on
About Hyderabad
The Hyderabad Community
Improve fullhyd.com
More
Our Other Local Guides
Our other sites
© Copyright 1999-2009 LRR Technologies (Hyderabad), Pvt Ltd. All rights reserved. fullhyd, fullhyderabad, Welcome To The Neighbourhood are trademarks of LRR Technologies (Hyderabad) Pvt Ltd. The textual, graphic, audio and audiovisual material in this site is protected by copyright law. You may not copy, distribute, or use this material except as necessary for your personal, non-commercial use. Any trademarks are the properties of their respective owners. More on Hyderabad, India. Jobs in Hyderabad.