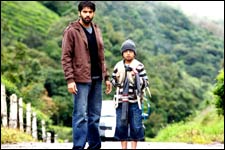 Deepa Garimella / fullhyd.com
EDITOR RATING
3.5
Performances
Script
Music/Soundtrack
Visuals
7.5
3.0
7.0
7.5
Suggestions
Can watch again
No
Good for kids
No
Good for dates
Yes
Wait to rent it
Yes
Sarvam is a Tamil offering. This implies the absence of comfort zones, and some ambitious experimentation with the human psyche. But then, for all its grand aspirations of being a psychological thriller, Sarvam goes quite wrong in both psychology and thrill.

It starts off with Karthik (Arya), an architect, trying to woo Sandhya (Trisha), a paediatrician at a hospital. He uses pick-up lines, he cooks up adorable acts for the kids, and he believes he can walk on air - and in sum total, turns up his charm enough to make the initially irked Sandhya actually turn around and profess her love for him.

Somewhere else on the same plane, uncomfortably close to their little blossoming world, a creepy drama is playing out. Eeshwar (JD Chakravarthy) is a football coach whose wife and kid were bumped off by Naushad (Indrajit) in an accident. Grief and anger have been bottling up in Eeshwar to give rise to a menacing revenge-seeking combination.

Afraid of him, Naushad and his kid Iman (Master Rohan) shift home every few weeks just Iman is out of danger. Still Eeshwar keeps hunting them down and making deadpan statements on how Naushad must be made to understand his (Eeshwar's) loss.

One twist smacks into another, and soon, Karthik ends up protecting Iman from Eeshwar and his increasingly dangerous advances on the father-son duo. Very quickly, testosterone is being unapologetically splashed in your face, what with the fights and the face-offs.

Sarvam isn't an out-and-out action movie. It looks like a loosely stitched up collage of different genres - romance and suspense - almost an attempt to be a Ghajini. The stitching up looks pretty desperate, though, and undoes most what the film accomplishes in the first half.

And it's not just that credibility goes for a toss the moment the Karthik-Imam-Eeshwar link is established. An unjustifiable mistake that Sarvam commits is in the way it portrays a character with perfectly believable emotions as a psychopathic villain. Eeshwar was clearly wronged, even if unintentionally, but Naushad shows more fear and dismissal of the incident than heart-felt remorse. His fear seems escapist, in fact, and it does seem more credible that a genuine demonstration of sympathy and kindness towards the victim would have cut matters pretty short.

Arya and Trisha are defectless in their acting job, and are great together, especially in the songs. They're probably the only reason this movie is watchable to the extent that it is. JD has hardly anything to do except be pokerfaced, and the rest of the cast is pretty good.

This is a brightly-shot and well-fashioned flick - 'white' is the theme all over - a fact that makes you take the experience seriously. Yuvan Shankar Raja's songs sound impressive, especially when coupled with some interesting choreography and visuals, and are worth adding to that casual collection.

On the whole, this one's for the benefit of your neighbourhood DVD rental store, and not really for the theatre ticket counters.
Share. Save. Connect.
Tweet
SARVAM SNAPSHOT

ADVERTISEMENT
This page was tagged for
telugu sarvam movie review
Sarvam telugu movie
Sarvam reviews
release date
Arya, Trisha
Follow @fullhyderabad
Follow fullhyd.com on
About Hyderabad
The Hyderabad Community
Improve fullhyd.com
More
Our Other Local Guides
Our other sites
© Copyright 1999-2009 LRR Technologies (Hyderabad), Pvt Ltd. All rights reserved. fullhyd, fullhyderabad, Welcome To The Neighbourhood are trademarks of LRR Technologies (Hyderabad) Pvt Ltd. The textual, graphic, audio and audiovisual material in this site is protected by copyright law. You may not copy, distribute, or use this material except as necessary for your personal, non-commercial use. Any trademarks are the properties of their respective owners. More on Hyderabad, India. Jobs in Hyderabad.