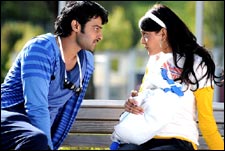 Deepa Garimella / fullhyd.com
EDITOR RATING
6.5
Performances
Script
Music/Soundtrack
Visuals
7.0
4.0
6.5
7.5
Suggestions
Can watch again
No
Good for kids
Yes
Good for dates
Yes
Wait to rent it
No
Darling looks like the work of someone who has studied formula so closely he knows it grain by grain and assumes people will be thoroughly impressed merely because it's been studied. However, substituting colour for substance and star power for script is not formula - it is a convenient mid-summer excuse for a film.

This one is a romantic comedy with all the "elements". The superhumanly strong and agile Prabhas (Prabhas) had the hots for his father's classmate's daughter Nandini (Kajal Aggarwal) when he was a child. Now, he rejects a junior (Shraddha Das) from college who proposes to him, and her goonda father (Mukesh Rishi) is livid. Prabhas pacifies him with an account of his love story - that he had run into Nandini her in Switzerland, that he's waiting for her, and that that's why he cannot marry his daughter.

Now, Prabhas' father (Prabhu) is one among a bunch of thick pals from college (Chandramohan, MS, Dharmavarapu, Ahuti Prasad, etc.) who keep having re-unions every year. The entire cast of the movie then pushes off to Araku, where there is a mega-gathering of families. The rest of the story is about how the couple gets together.

The first half of the movie traces Prabhas and his friends frolicking their way through Swiss locales and Prabhas wooing Nandini, while the second half is a family-buffered re-romance between the two. And somehow, even with so many props, the love story has hardly any intensity.

The whole story is a string of one juvenile incident or conflict after another, and wherever the plot is not predictable it is downright ridiculous. Then, though there's not much by way of brawn and gore, even the little violence present in Darling seems well avoidable and out of place.

But like a gravy that saves the day when hardened nuggets of kofta threaten to bring your meal down to the dumps, what works in Darling's favour are the hero's sidekicks. Led by Srinivas Reddy, this bunch of cronies is armed with some delightful comedy that serves to resuscitate an otherwise lazy script devoid of powerful dialogues. Though the actual streaks of comic brilliance are too few and far between, there's an air of light-heartedness throughout the flick that keeps the mood going.

Prabhas visibly has fun throughout the flick, though his wardrobe designer has a few questions he might have to ask of himself. Kajal puts up an expert show as the chirpy Nandini, especially in the Switzerland half of the movie, and is quite a post-Trisha phenomenon where such roles are concerned.

And like we said, the hero's buddies are a fun pack, delivering some wacky yet clean humour that lets the film sail through. The elder members of the cast have pretty boring roles, but Tulasi, in particular, overacts to the hilt.

Cheerful cinematography makes this a rather pleasant watch, and the songs are pretty engaging as well.

See Darling (Telugu) full details
DARLING (TELUGU) USER REVIEWS
1 - 8 OF 8 COMMENTS
POSITIVE  |  NEGATIVE |  NEWEST  |  OLDEST  |  MOST HELPFUL  |  LEAST HELPFUL
USER RATING
7.7
6 USERS
Performances
Script
Music/Soundtrack
Visuals
7.2
6.4
6.4
8.0
Can watch again - No
Good for kids - Yes
Good for dates - Yes
Wait to rent it - No
digitaldreamz on 23rd Jun 2010, 6:17pm | Permalink
It's a feast to our eyes in the first half of the movie with the beautiful swiss locales and the gorgeous looking Kajal agarwal, she was indeed looking like an angel in the first half of the movie with great attire. That's it.
There is nothing else worthwhile either to watch in the movie or to comment about, everything else is the same crap that's found in all regular telugu movies.
I think the costume designer for Prabhas is on high all the time or he/she has only one design and kept on changing colors of the same attire, It was lousy.


Pros: Beauty of Swiss and kajal
Cons: Other than the pros i mentioned, everything else is crap

RATING
7
cymkhat on 27th Apr 2010, 10:53am | Permalink
The movie is not worth watching in theater. The movie has nothing but the swiss landscapes and a few jokes by heros friends. A routine telugu masala movie with zero specials. Waste of money.

mrkrishna334 on 27th Apr 2010, 1:16am | Permalink
Good entertaining and must watchfull film
Sidharth on 26th Apr 2010, 12:19pm | Permalink
To put it simply Darling movie is basically a Lofoot movie with an exceptional Ded-demaak story. It has got all the phaltu masala of induced sentiment, Kullu-jokes, unnecessary songs, age old pathetic story, random script and pichi-kuntla songs. This movie is all about showing how cool (thats what director thinks) Prabhas looks in different dude like costumes (Yo! kind of dude). Un-touching sentiment between prabhu (prabhas father) and kullu english jokes of prabhas mother is picha lite in the movie. Kajals role is a dumbest dumbo which is a typical role given to heroines in todays telugu movies. There are a few comedy bits by srinivas reddy and thats it. The movie lacks everything else. So, I recommend not to waste your money on this movie as I did.

ADVERTISEMENT
This page was tagged for
telugu movies darling movie
telugu movies darling movie 201021
darling full movie in telugu in online
Darligu Telugu movie daled
darling telugu movie
Follow @fullhyderabad
Follow fullhyd.com on
About Hyderabad
The Hyderabad Community
Improve fullhyd.com
More
Our Other Local Guides
Our other sites
© Copyright 1999-2009 LRR Technologies (Hyderabad), Pvt Ltd. All rights reserved. fullhyd, fullhyderabad, Welcome To The Neighbourhood are trademarks of LRR Technologies (Hyderabad) Pvt Ltd. The textual, graphic, audio and audiovisual material in this site is protected by copyright law. You may not copy, distribute, or use this material except as necessary for your personal, non-commercial use. Any trademarks are the properties of their respective owners. More on Hyderabad, India. Jobs in Hyderabad.