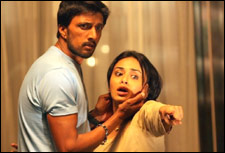 Deepa Garimella / fullhyd.com
EDITOR RATING
3.0
Performances
Script
Music/Soundtrack
Visuals
7.0
3.0
7.5
7.0
Suggestions
Can watch again
No
Good for kids
No
Good for dates
No
Wait for OTT
Yes
Phoonk 2, supposedly the "real thing" that Phoonk "merely" warned you about, is just another uneventful episode in the now-made-eternal wait for Ram Gopal Varma's next hit. Driven purely by brand RGV than anything else - were it not for him all over the promos, there wouldn't have been any rushes in the first place - this movie has, as has come to be of the Factory's habit, no substance.

Rajeev (Sudeep), his wife Aarti (Amrutha Khanvillkar), their kids Raksha (Ahsaas Channa) and Rohan (Rishabh Jain), and their maid (Anu Ansari) all move to a new house in the middle of nowhere, or rather, conveniently between a forest and a beach. The children bring home a doll from the jungle, and eerie things begin to happen around the place, none of which is scarier than an abrupt camera movement coupled with a blank expression and a high-pitched violin screech.

Rajeev's sister (Neeru Bajwa) and her husband (Amit Sadh) come visiting, and the creepiness goes several pitches higher when the ghost possesses Aarti and threatens to kill all those dear to him. The ghost, by the way, is Madhu (Ashwini Kalsekar), the woman who was killed in Phoonk.

Rajeev sends for help, but everyone he turns to - including friends and tantriks - keeps getting butchered gorily. Evil soon strikes his family as well, when Aarti goes completely berserk with a knife, white contact lenses and ashen make-up.

Well, the only semblance of soul this flick has is in the last quarter of the film, when Aarti is severely possessed and there's action all over the house. Till then, the joke's mostly on you.

Plenty of spook ruses manage to fuel the movie till the interval, and the end product doesn't even seem as though there were a meticulous build-up to a theatrical anti-climax. So much so that it's incomprehensible why there must be an entire movie if everything that has to happen must do so only in the last few minutes.

Moreover, even post all the gory murders and the bloodiness, there's no logical closure to the whole deal. There are no answers to what happens to the ghost, what the family does after the climax, and how Rajeev's fundamental problem (of keeping his family - or whatever's left of it - safe) is solved.

Rising above the palpable absence of real writing, this flick has technical values expected of the RGV stamp. However, the effect of the mostly faultless visual and audio work is nullified thanks to the supreme level of predictability in the script.

Performances aren't a problem here, and Sudeep, Amrutha and the kids do a good job. Everyone other than the pivotal characters has standard-issue work to do, and the cinematography takes care of any weaknesses in the acting department.

Phoonk 2 is worth a sum total of about 3 goosebumps. For those who scare easily, at the very least it'll help in creating an illusionary triumph over the fear of fear.
Share. Save. Connect.
Tweet
AAVAHAM SNAPSHOT

ADVERTISEMENT
This page was tagged for
aavahammove
aavaham telugu movie
Aavaham telugu movie
Aavaham reviews
release date
Follow @fullhyderabad
Follow fullhyd.com on
About Hyderabad
The Hyderabad Community
Improve fullhyd.com
More
Our Other Local Guides
Our other sites
© Copyright 1999-2009 LRR Technologies (Hyderabad), Pvt Ltd. All rights reserved. fullhyd, fullhyderabad, Welcome To The Neighbourhood are trademarks of LRR Technologies (Hyderabad) Pvt Ltd. The textual, graphic, audio and audiovisual material in this site is protected by copyright law. You may not copy, distribute, or use this material except as necessary for your personal, non-commercial use. Any trademarks are the properties of their respective owners. More on Hyderabad, India. Jobs in Hyderabad.