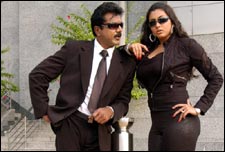 Ultimately, this dubbed celluloid wonder won't make it to the Oscars. That said, it won't kill you either. It's in between - it'll manage to keep you barely sane enough to be able to tell the "Exit" signs from the "The End" sign and keep you from rushing out the wrong door.

The much-revered saintly Rajayya (Sarath Kumar) is a guiding light of sorts for his fishing village, and has vowed to never set foot outside the village and desert his people. Suddenly one day, he is seen hurrying off somewhere with a suitcase, after coming across a newspaper article. But before he can even make it to the road, he dies of a heart attack.

His son, the award-winning nano-technology scientist Karthikeya (Sarath Kumar again), starts getting to the bottom of what happened and what was in the newspaper. He goes to Malaysia, where he discovers that his father had been sentenced to death for some heinous crimes. He also discovers his mother (Jayasudha) there.

Karthikeya goes all out to prove that his father was accused wrongly on all counts. In the process, we have a romantic track with a woman (Farzana) with whom he has a couple of full-bodied collisions, a lawyer (Namitha) who keeps coming onto him, and a handful of villains of varying degrees of blah.

Like we said, this flick is all about ritualistically executing cinematic clichés, pretty unapologetically, at that. It's not an extremely inane movie, but just as ordinarily mediocre as hundreds of other films. If you're upto it, it even manages to maintain a respectable level of interest - the script is well-paced and a fair bit of mild suspense is woven in.

Ultimately, this is a Tamil-dubbed production, which is where it loses even prospective audiences.
Save for the lead actors - save, in fact, for Jayasudha - none of the cast is recognizable. Sarath Kumar seems about the most dignified part of the movie, closely followed by Jayasudha. Namitha gets to add some oomph, though.

The cinematography is bland and the music utterly forgettable - and wouldn't have made a difference even if they were otherwise.

ADVERTISEMENT
This page was tagged for
1977 Jarigindi Yemiti? telugu movie
1977 Jarigindi Yemiti? reviews
release date
Sarath Kumar, Namitha
theatres list
Follow @fullhyderabad
Follow fullhyd.com on
About Hyderabad
The Hyderabad Community
Improve fullhyd.com
More
Our Other Local Guides
Our other sites
© Copyright 1999-2009 LRR Technologies (Hyderabad), Pvt Ltd. All rights reserved. fullhyd, fullhyderabad, Welcome To The Neighbourhood are trademarks of LRR Technologies (Hyderabad) Pvt Ltd. The textual, graphic, audio and audiovisual material in this site is protected by copyright law. You may not copy, distribute, or use this material except as necessary for your personal, non-commercial use. Any trademarks are the properties of their respective owners. More on Hyderabad, India. Jobs in Hyderabad.