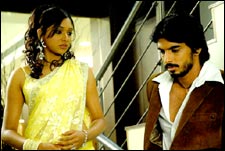 Deepa Garimella / fullhyd.com
EDITOR RATING
1.0
Performances
Script
Music/Soundtrack
Visuals
2.0
1.0
3.0
3.0
Suggestions
Can watch again
No
Good for kids
No
Good for dates
No
Wait to rent it
No
Muskurake Dekh Zara is so far removed from even the most minimum standards of Hindi film making that it is a dumb-founding piece of exotica. One of its most ambitious jokes is about how corny Madrasi films are, but the tired tripe that this film serves up makes anything look good, and we mean anything.

It's hard to narrate the story with a straight face. The honest and outspoken Vivek (Gashmeer Mahajani), who hails from a village, has just had his bride walk away from his wedding. Gracefully taking it in his stride, he then moves to the city to make a living as a chef, living in with some friends.

One night he rescues the rather hep and drunken yet evidently sweet Preeti (Twinkle Patel) from a bunch of equally drunken lechers. She returns the favour by kissing him on the cheek. That sets off the love bells ringing in our man's head, and he's rather smitten by her. She keeps joking around with him - they're all one big gang of pals now - and he keeps assuming she loves him.

But soon she announces that she's getting engaged to Prakash (Hiten Paintal). Vivek is outraged but Preeti can't understand why he had to look at all her moves the wrong way. Vivek then lectures her on how Indian rural men value relationships far better than NRI women do.

Meanwhile, Prakash turns out to be a complete creep. "Incidentally," he was the guy Vivek's bride had run away to but immediately got dumped by. Anyway, Prakash is marrying Preeti only for the money. In the rest of the story, we get to watch and weep as the triangle plays itself out to a happy ending.

Who fights goons to save a heroine, in a Hindi flick nowadays? Muskurake Dekh Zara is such a lousy flick it feels surreal even to be sitting through it. Firstly, the plot has obviously had a sum total of about 3 minutes of thought spent on it - in the year 1657. The story is so dated that whatever was growing on it died of senility.

And to add to the abysmal writing, are the zillion unknown faces with the energy levels of a dehydrated twig. Except for Tiku Talsania and a few character actors, the entire cast is amateurish in performances.

There is no semblance of creativity in the visuals. As for the songs, well, we'll call them "music" if the makers so wish.

If you do end up walking into this one, do remember to walk out before you count to three. And even if you can't count to three, that's no excuse to be watching it.
Share. Save. Connect.
Tweet
MUSKURAKE DEKH ZARA SNAPSHOT

ADVERTISEMENT
This page was tagged for
Muskurake Dekh Zara hindi movie
Muskurake Dekh Zara reviews
release date
Gashmeer Mahajani, Twinkle Patel
theatres list
Follow @fullhyderabad
Follow fullhyd.com on
About Hyderabad
The Hyderabad Community
Improve fullhyd.com
More
Our Other Local Guides
Our other sites
© Copyright 1999-2009 LRR Technologies (Hyderabad), Pvt Ltd. All rights reserved. fullhyd, fullhyderabad, Welcome To The Neighbourhood are trademarks of LRR Technologies (Hyderabad) Pvt Ltd. The textual, graphic, audio and audiovisual material in this site is protected by copyright law. You may not copy, distribute, or use this material except as necessary for your personal, non-commercial use. Any trademarks are the properties of their respective owners. More on Hyderabad, India. Jobs in Hyderabad.