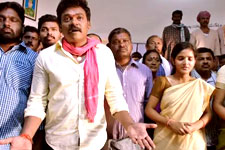 Veturi Sarma / fullhyd.com
EDITOR RATING
3.0
Performances
Script
Music/Soundtrack
Visuals
5.0
2.0
3.0
3.0
Suggestions
Can watch again
No
Good for kids
No
Good for dates
No
Wait for OTT
Yes
When was the last time we saw the bad guys kidnapping the hero's entire family, holding them captive with sickles to their throats and daring the hero to come get them? Shambho Shankara belongs to that bygone era and vows resolutely to never come out of its ways.

So we have Shankar (Shakalaka Shankar) from Ankalammapalle who goes about his days helping out poor villagers with their chores, wooing his ladylove, mouthing off his brother who asks him to get a job and loafing around in general. Until a notification for SI selections gets him out of his stupor and he quickly morphs himself into the Angry Young Man - and stays that way though he is rejected for the job.

Meanwhile, Shankar's sister falls in love with the son of the village President (Arun Ghosh), but the man has eyes only on her body, and rapes and kills her. This irks Shankar no end and, in a scene reminiscent of Posani's writing in his hey-day, he gets the President's son to marry his sister's corpse, and promptly kills him once the ordeal is done.

The Commissioner (Nagineedu) learns of the horrific incidents and concludes that Shankar is indeed the man that the village needed, and grants him special powers (we never know what they are, but can only deduce that they include him being a cop without the uniform or salary) and a jeep (for look and kick). Shankar for his part has already brought in the red towel that stands for courage, valour, sincerity and whatever else a red towel can stand for.

So Shankar is now pretty much a cop, and which President can overcome the righteous and angry Telugu Film Cop? After breaking a thousand bones, Shankar states that Ankalammapalle is free of all its problems, and it's time for him to get transferred to other villages that have similar problems.

The film's plot is somewhat similar to that of Rangasthalam, but without any of the good things that made Rangasthalam work. The narrative and the plot devices used, the dialogue-baazi and the action direction appear severely outdated. With a meagre budget and a hero with limited star power, the film's script and execution needed to be innovative and smart, but director N Sreedhar seems reluctant to do anything other than the tried and tested, and makes this an expansive, generic film. Sure, he goes all out and gives it the full-blown mass film treatment, but that becomes its undoing as we have all been there and seen that, and done a lot better.

Also, for a vigilante film to work the audiences need to feel the anguish of the wronged hero, but we are left cold and bored with the dull happenings devoid of any pathos. Despite terrible things happening to the hero's loved ones and his village, we never care for the people in the movie or root for him to act as their saviour.

It is difficult to imagine Shakalaka Shankar in the role of the angry young man vigilante, but youi can't fault the effort. The movie belongs entirely to him, and there is no scene where he is not involved. He is graceful in the dances and effortless with the heavy-duty dialogues, and evokes Pawan Kalyan a lot with his mannerisms. He is not everyone's cup of tea in this role, but if it works for you, it is because he has put in a lot of work into this.

No other character in the movie is of any significance except probably Ajay Ghosh as the President. His role is meant to be menacing/entertaining, but the director clearly has no idea of how to make him either of those. Karunya has exactly three scenes in the film, and that is usually too small for anyone to make an impression.

Sai Karteek's score is listless when it is not too loud, and the songs are strictly average and will probably be heard only by the people who see the movie. There isn't any finesse in either the visuals or the editing department, and we are left with a film that doesn't make an effort even to look pleasing to the eye.

Shambho Shankara would have been unbearable even if Pawan Kalyan acted in it. Shakalaka Shankar is only an imitation, and can only do as much.
Share. Save. Connect.
Tweet
SHAMBHO SHANKARA SNAPSHOT 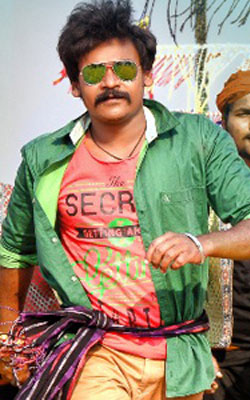 ADVERTISEMENT
This page was tagged for
shambo shankara telugu songsmp3
Shambho Shankara telugu movie
Shambho Shankara reviews
release date
Shakalaka Shankar, Karunya
Follow @fullhyderabad
Follow fullhyd.com on
About Hyderabad
The Hyderabad Community
Improve fullhyd.com
More
Our Other Local Guides
Our other sites
© Copyright 1999-2009 LRR Technologies (Hyderabad), Pvt Ltd. All rights reserved. fullhyd, fullhyderabad, Welcome To The Neighbourhood are trademarks of LRR Technologies (Hyderabad) Pvt Ltd. The textual, graphic, audio and audiovisual material in this site is protected by copyright law. You may not copy, distribute, or use this material except as necessary for your personal, non-commercial use. Any trademarks are the properties of their respective owners. More on Hyderabad, India. Jobs in Hyderabad.