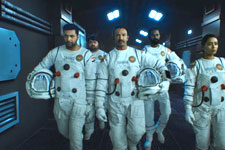 Veturi Sarma / fullhyd.com
EDITOR RATING
5.5
Performances
Script
Music/Soundtrack
Visuals
6.0
5.0
8.0
7.0
Suggestions
Can watch again
No
Good for kids
Yes
Good for dates
No
Wait for OTT
Yes
There is an interesting scene in Shakri Soundar Rajan's Tick Tick Tick early in the film. M S Dhoni stumps David Hussey in an ODI, and the on-field umpires refer it to the television umpire, who rules it out even when everyone can see it isn't. It was a gaffé that the TV umpire eventually corrected, but Rajan shows us that a couple of geeks in Chennai (or Vizag, depending on the language you are watching this move in) had hacked into the third umpire's system and given that decision. It is a scandalous claim for anyone to make, but it works here in giving a taste of the outrageousness that will come out over the next two hours.

An asteroid of about 160 km diameter is about to hit the shores of Vizag in a week's time, and its impact will be the death of at least 4 crore people. However it can be blasted and diverted away from the earth by using a missile weighing 200 tons that the only way for them to get at such short notice is by stealing from a Chinese spaceship.

These are mind-boggling numbers and the stakes were never so high in any Indian film so far. Since we have noted the outrageousness of everything in the movie already, it should come as no surprise that the ISRO chief Mahendran (Jayaprakash) comes up with a plan of entrusting the stealing to to a magician turned conman turned convict Vasu (Jayam Ravi) and his motley group of hackers/whizkids/comedians - Venkat (Ramesh Thilak) and Appu (Arjunan). They have less than a week to do the training, stealing the missile from the enemy spaceship while taking a detour onto the moon, and finding out who so badly wants the mission to fail, all while the clock is, um, ticking.

Yet none of this builds up any sense of urgency or thrill into the narrative as the film takes its time incorporating the hero elevation moments and the masala scenes that are a staple diet for all Indian films. At one point the army chief even tells the crew to enjoy the view that is on offer. Also for a film that spends more than half its run time in outer space, Tick Tick Tick doesn't throw any physics or space jargon at the audiences, and seems to be content trying to be a crowd-pulling mass film.

And that isn't necessarily a bad thing to happen for the film since Rajan's script weaves many of the familiar tropes fairly well into the narrative. The father-son bond, the training, the comic situations, the entirely predictable twist at the climax... a whole lot of clichés are dutifully incorporated by the film without taking itself too seriously at any point. Aided by D Imman's thumping background score that never fails to underscore any dramatic moment, Vasu and his team of astronauts navigate the outer space and get the job done without ever breaking a sweat. Thankfully there aren't any choreographed songs in outer space as the team stays on task throughout their mission.

Jayam Ravi couldn't have asked for a better vehicle to establish his mass-hero credentials, and the role doesn't even demand too much either in histrionics or emoting of him. Given that even most of whatever facial contortions are needed need to be rendered from within a helmet, Ravi does alright. Nivetha Pethuraj who was so good in Mental Madhilo doesn't get any opportunity to showcase her potential, and is reduced to a damsel in distress, and sometimes in a swimsuit. Aaron Aziz's turn as the head of the spaceship for the rival country turns out unintentionally funny most of the time but he gets the best line in the movie when he wryly comments about an Indian astronaut who can fight.

Given the limited budget the filmmakers had to work with for a space film, the spectacle is done quite well. The VFX isn't groundbreaking but never gets tacky, and stays honest throughout the duration in space. D Imman's score and Pradeep E Raghav's slick editing in making this a film just over 2 hours in run-time ensure that there aren't many dull moments.

Tick Tick Tick is the first Indian space film as the makers claim, but the movie never makes you feel that you are watching anything different from the routine fare. It is the quintessential Indian film that way. There isn't anything groundbreaking in here, but when has that ever stopped us from appreciating our own brand of moviemaking?
Share. Save. Connect.
Tweet
TIK TIK TIK SNAPSHOT 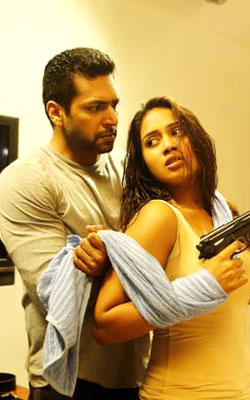 See Tik Tik Tik full details
TIK TIK TIK USER REVIEWS
1 - 2 OF 2 COMMENTS
POSITIVE  |  NEGATIVE |  NEWEST  |  OLDEST  |  MOST HELPFUL  |  LEAST HELPFUL
Pasya on 28th Jun 2018, 10:10pm | Permalink
Amrutam, Chandamamalo was a space film too :) Something that came a few years earlier.
Veturi Sarma on 30th Jun 2018, 9:25am | Permalink
I'm glad you mentioned it coz I really wanted to include that snippet, but didn't want to come out as too snobbish :)
TJ Reddy on 25th Jun 2018, 3:38pm | Permalink
Man the one thing that bothers me about this movie more than anything is that it is Armageddon. And if you want to lift a plot why lift Armageddon of all things. So baffling
The Common Movie Goer on 27th Jun 2018, 11:40am | Permalink
How dare you, TJ?! How dare you? Armageddon was a masterpiece. Who didn't shed a tear when (SPOILER ALERT) Bruce Willis, the guy who went from best oil-driller on the face of the earth to the "best" astronaut in the entire galaxy in a week's time, sacrificed himself so humanity can live on?

Sidebar: Check out Ben Affleck poking holes in the movie's logic in this commentary clip. It's hilarious stuff.

https://www.youtube.com/watch?v=-ahtp0sjA5U
TJ Reddy on 28th Jun 2018, 5:43am | Permalink
Oh, I know this. One of the best DVD commentaries ever. My god this movie. That animal cracker scene is pure gold.

ADVERTISEMENT
This page was tagged for
tick tick tick telugu full move
tik tik tik movi
tik tik movi rezlt telugu
jayam ravi tick tick mvi review
tik tik tki full telgu full movie
Follow @fullhyderabad
Follow fullhyd.com on
About Hyderabad
The Hyderabad Community
Improve fullhyd.com
More
Our Other Local Guides
Our other sites
© Copyright 1999-2009 LRR Technologies (Hyderabad), Pvt Ltd. All rights reserved. fullhyd, fullhyderabad, Welcome To The Neighbourhood are trademarks of LRR Technologies (Hyderabad) Pvt Ltd. The textual, graphic, audio and audiovisual material in this site is protected by copyright law. You may not copy, distribute, or use this material except as necessary for your personal, non-commercial use. Any trademarks are the properties of their respective owners. More on Hyderabad, India. Jobs in Hyderabad.