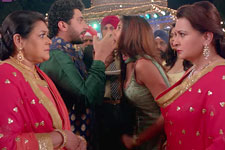 Neema Pramod / fullhyd.com
EDITOR RATING
4.0
Performances
Script
Music/Soundtrack
Visuals
4.5
3.0
5.0
6.0
Suggestions
Can watch again
No
Good for kids
No
Good for dates
Yes
Wait for OTT
Yes
If you are a woman, you would know that a film with Luv Ranjan's name on it spells nothing but trouble. Even if some of the humour does work for you, you will end up squirming when one of those inevitable "Problem yeh hai, ki woh ladki hai!" monologues kick in. But surprise, surprise - not only does this Luv Ranjan production not contain such a monologue, it does not have even a single line bashing women. But sadly, a lack of misogyny is not the only prerequisite to make a good film.

The premise of Jai Mummy Di looks interesting on paper. Puneet (Sunny Singh) and Saanjh (Sonnalli Seygall) are neighbours and have been in love with each other for a while when we first meet them. The obstacle in their path, however, is the long-standing enmity between their mothers - Laali (Supriya Pathak) and Pinky (Poonam Dhillon).

So when Saanjh proposes marriage to Puneet, he balks at the idea of having to confront his mother. The two of them break up, and eventually get engaged to other people. But as the weddings start getting closer, Puneet and Saanjh discover that they still have feelings for each other, and decide to try one last time to make their mothers see eye to eye.

This is an interesting spin on classic "star-crossed lovers" template. While in most films it is the animosity between the fathers that come in the way of two lovers, here it is friction between the mothers that becomes their hurdle. And for a brief while the film manages to entertain along these lines, without letting the humour get offensive or - as mentioned above - misogynist.

As for the latter, credit has to be given where it's due. Not only does the movie stay away from female-bashing, it even tries to make a few relatively progressive statements. When Saanjh asks why women should be the ones to leave their homes and families for marriages, Puneet not only respects the argument but also complies with it. And a suggestion of a possible lesbian relationship between Laali and Pinky is greeted with no fanfare whatsoever.

Though this is definitely an improvement, the film does not manage to really "get there" in terms of progressiveness. The mothers end up being mere caricatures after a point - those typical nagging women with their superficial egos making life difficult for everyone. And many of Saanjh's dialogues make it evident that they were written by a man. Which modern, educated woman would describe herself as a "plot" or a "package" - only to have the man chide her for objectifying herself? It is good to see that some movies are now giving equal space to both their male and female protagonists, but why can't the same equality be extended beyond the screens, too, with men and women working in tandem to write these characters?

Another fact that Jai Mummy Di makes you realize is just how much of the jokes in such comedies have stemmed from female-bashing, body-shaming, slut-shaming and racism. With this film resorting to almost none of these tropes to evoke laughter, it also ends up being unfunny after a point. The laughs progressively decrease in the first half, and die out post-interval. The shenanigans in the prolonged climax are supposed to have you falling off the seats in laughter, but all you end up doing is stare at the screen waiting for the rather predictable ending to come by.

What really keeps the repetitive second half going is the curiosity to discover what exactly the reason was behind the hatred between the two mothers. But the reveal, when it comes, turns out to be utterly stupid, making you question your decision of bothering to sit through the whole 103-minute runtime. For a movie that revolves around the conflict between two women, the way the conflict is dealt with and resolved is truly disappointing.

Supriya Pathak and Poonam Dhillon have a lot of fun hamming it up to the maximum, but their antics lose their charm too soon. Sunny Singh and Sonnalli Seygall are okay in their parts, but not competent enough to shine through the insipid material given to them. The rest of the cast is passable.

The songs follow the trend of remixing hit Punjabi numbers, complete with a Neha Kakkar song at the very end as is the rule these days. But they are undeniably peppy, and infuse some much-needed energy into the film. As for the other technical aspects, they are just like the movie - okay, but nothing to write home about.

Jai Mummy Di is the kind of film you can neither love nor hate. It just exists, not really adding anything new to the universe, but also not taking anything away from it. You probably won't miss out on anything if you do not watch it, but neither will you be pulling your hair out in frustration at having watched it.
Share. Save. Connect.
Tweet
JAI MUMMY DI SNAPSHOT 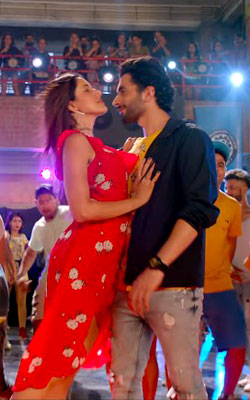 ADVERTISEMENT
This page was tagged for
Jai Mummy Di hindi movie
Jai Mummy Di reviews
release date
Sunny Singh, Sonnalli Seygall
theatres list
Follow @fullhyderabad
Follow fullhyd.com on
About Hyderabad
The Hyderabad Community
Improve fullhyd.com
More
Our Other Local Guides
Our other sites
© Copyright 1999-2009 LRR Technologies (Hyderabad), Pvt Ltd. All rights reserved. fullhyd, fullhyderabad, Welcome To The Neighbourhood are trademarks of LRR Technologies (Hyderabad) Pvt Ltd. The textual, graphic, audio and audiovisual material in this site is protected by copyright law. You may not copy, distribute, or use this material except as necessary for your personal, non-commercial use. Any trademarks are the properties of their respective owners. More on Hyderabad, India. Jobs in Hyderabad.