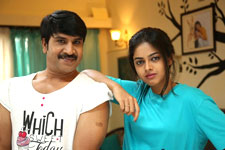 Kritika Deval / fullhyd.com
EDITOR RATING
2.5
Performances
Script
Music/Soundtrack
Visuals
4.0
3.0
4.0
5.0
Suggestions
Can watch again
No
Good for kids
No
Good for dates
No
Wait for OTT
Yes
Unusually, when people take a previously done idea and run with it, it generally takes a more outlandish direction, but we can understand that it would be difficult to make the original Jambalakadi Pamba more outlandish than it already was. The version 2.0, however, goes in the exact opposite direction, and manages to still astound in all the worst ways.

Varun (Srinivasa Reddy) and Pallavi (Siddhi Idnani) are a married couple at odds for entirely incomprehensible reasons, and are getting a divorce under the aegis of Harischandra Prasad (Posani Krishna Murali) when the latter passes away. When he meets his maker, he is told that his zeal in pursuing his calling as a divorce lawyer was not appreciated, and that he would have to make up for it before he can be allowed into the afterlife to his lifemate given he had done so much to separate others from theirs for profit. Thus begins a comedy of errors that's almost entirely more error than comedy.

Hari is now left to haunt the couple in an increasingly annoying fashion, with the aid of increasingly loud Tollywood clichés, as Varun and Pallavi become more and more set against one another, coming together only in their decision to get rid of each other. Meanwhile, his former subordinate, played by Vennela Kishore, is plotting to make sure the divorce goes through so that he can score with Pallavi. At some point towards the end of the first half, Hari swaps the bodies of Varun and Pallavi, an act so cringe-inducing that the following intermission left us with mental outpourings of gratitude towards whoever looks after these things. The rest, as they say, is excruciatingly tedious history.

Srinivas Reddy's character Varun is so whiny that we understand the incandescent rage that seems to be Pallavi's kneejerk reaction to any and all encounters with his face. Siddhi Idnani is very pretty and good at making angry faces. She's more masculine when playing her own character than Srinivas Reddy after the so-called body switch, when his effête manner is more derogatory than realistic. Posani likes his drama far too much as he is aided with all kinds of dramatic CGI and editing to give you constant headaches. Vennela Kishore finds it unsurprisingly easy to play a total sleazebag. The music will make you want to get your earphones out.

Jambalakadi Pamba was so little in need of making that those in it seem constantly bewildered, almost as if they're wondering where they are and what they're doing there. Don't make the mistake they seem to have made, and stay far away from the theatres.
Share. Save. Connect.
Tweet
JAMBA LAKIDI PAMBA SNAPSHOT 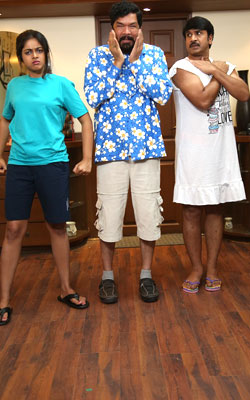 ADVERTISEMENT
This page was tagged for
JambaLakidiPambaFullMovieHind
jamba lakidi pamba movie in hindi
Jamba Lakidi Pamba telugu movie
Jamba Lakidi Pamba reviews
release date
Follow @fullhyderabad
Follow fullhyd.com on
About Hyderabad
The Hyderabad Community
Improve fullhyd.com
More
Our Other Local Guides
Our other sites
© Copyright 1999-2009 LRR Technologies (Hyderabad), Pvt Ltd. All rights reserved. fullhyd, fullhyderabad, Welcome To The Neighbourhood are trademarks of LRR Technologies (Hyderabad) Pvt Ltd. The textual, graphic, audio and audiovisual material in this site is protected by copyright law. You may not copy, distribute, or use this material except as necessary for your personal, non-commercial use. Any trademarks are the properties of their respective owners. More on Hyderabad, India. Jobs in Hyderabad.