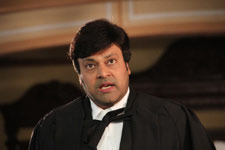 Pranita Jonnalagedda / fullhyd.com
EDITOR RATING
1.0
Performances
Script
Music/Soundtrack
Visuals
2.0
2.0
3.0
3.0
Suggestions
Can watch again
No
Good for kids
No
Good for dates
No
Wait for OTT
No
What is tolerance?

It is the ability to put up with 2.5 hours of Barrister Shankar Narayan and still be able to come out of the theatre without abandoning your state of mind.

Luck is the ability to save your eardrums from bleeding, in spite of exposing your ears to 145 minutes of tumultuous screaming.

However, luck will only take you so far, but it is only faith that will take you all the way. It is only faith in humanity (or why would the filmmakers - who are obviously human - allow a fellow human to endure such suffering) that would help you sit through this movie till the end.

To begin with the film, this is the story of a barrister and his nephew - Barrister Shankar Narayana and Venu - both roles played by V V Raj Kumar.

FYI, Raj Kumar was a known actor in the 1980s. By the 1990s, he shifted to from Tollywood to television, and worked in some successful serials like Vidhi. Deciding to make a comeback into films, he sent his portfolio to all producers and directors. But evidently, nobody felt like giving him a break. Hence, he braved all odds and produced this disaster all by himself.

Coming back to the movie, Raj Kumar plays Venu, a law student who has just finished his education. He joins his barrister uncle as an assistant.

The uncle, Shankar Narayan (again played by Raj Kumar), is the most successful lawyer in Hyderabad, and hasn't lost a single case in his entire career. And more importantly, he loves his nephew (wish he didn't - it would have saved us from this story) more than anything in the world.
The rest of the story is about how the two of them end up on different sides of the court room as they take up the same case - one supporting it, and one against it.

First and foremost, we are in 2013 - this fact seems to have escaped the director's memory. This film is similar to many movies that you must have seen in the 1980s - of the Jeetendra variety. Interestingly, that would have been the same time when the lead actor must have been the college student that he is portraying now.

The role of the barrister is the most irritating one you must have seen in the last 2 decades. Shankar Narayan thinks he is Justice Chowdhary, and tries to emulate (more like immolate) both Sr. NTR and Sanjeev Kumar in his performance. This strange mash-up of the two iconic, and very different actors, makes you feel like he is trying to eat dal with jam.

So Shankar Narayan screams, screams, and screams. There are moments when you wonder whether this is a horror film - luckily it isn't.

While the story is persecution, the songs are torturous, and the editing is terrible. All this has ensured that nobody is going to watch this film.

If you are planning a murder that will not get your hands dirty, this movie could do half your work. The film's lights are on, but no-one's home. Avoid this film, even its poster. Case dismissed.
Share. Save. Connect.
Tweet
BARISTER SHANKAR NARAYAN SNAPSHOT 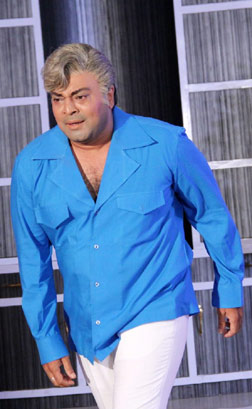