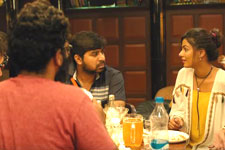 Swaroop Thotada / fullhyd.com
EDITOR RATING
7.0
Performances
Script
Music/Soundtrack
Visuals
7.0
6.5
7.5
7.0
Suggestions
Can watch again
Yes
Good for kids
Yes
Good for dates
Yes
Wait for OTT
No
Tarun Bhascker makes his films like he spells his name: a slightly new spin on something pretty familiar. His debut Pellichoopulu garnered plenty of limelight and was hailed as a path-breaking movie, but is in fact only a very well-executed romcom. Since the other romcoms before that are so piffle, monotonous and synthetic, his film served as a revelation that audiences actually have an appetite for organically written characters and everyday sounding dialogues. In a way, he earned the overrating.

His new film is again a new spin on a familiar genre called buddy comedy, but Bhascker populates his movie not with worn-out tropes but with characters picked from a fresh milieu, one that the director himself inhabited - short film makers in Hyderabad.

Vivek (Vishwak Sen), Karthik (Sai Sushanth), Upendra (Venkatesh Kakumanu) and Kaushik (Abhinav Gomatam) are urban Telangana-speaking Hyderabadi youth whose lives are defined and limited by their passions, idiosyncrasies and eccentricities. We are given a peek into Karthik's thinking when he is shown smooth-talking a trio of middle-class youth who just want to enter a "posh" pub into being convinced that they actually don't deserve to have such an aspiration because they can only make a bill of five thousand with all their might. He theorizes (rightly) that another world opens up when you drive a Mercedes and wear Armanis, and that people from that world wouldn't be thrilled to share it with guys who shop in Koti.

He currently stands at the door that divides the said worlds but aspires to cross it. He reminds you of those middle-class youth you meet that wish to buy an iPhone just so they can look rich. His only way to get rich is to marry into it, and lucky for him, his boss gives him an uber-costly ring and asks him to propose to his daughter. Being on the verge of all his dreams coming true, he decides to celebrate it with his friends. That's where it all starts.

Vivek is played by Vishwak Sen as an absentee loser who can't come to terms with his break-up (Simran Choudhary plays his former flame). He wears sunglasses all the time to hide the hurt in his eyes, and he also has that problem that the protagonist of almost every Telugu film these days is gravitating towards - unhinged aggression. Upendra is the underdog of the group, and Kaushik is the butt of all jokes. Bhascker textures his characters with inner conflicts so they are not just their surface peculiarities.

However, only Vivek looks like he is truly passionate about filmmaking, and the rest appear like they are just tagging along. This feeling you get is aided by that scene where they distribute responsibilities among themselves to make a filmmaking team, and it looks like they take it up just because they can and not because they badly want to. The movie intends to portray these guys as ones chasing their dreams, but doesn't receive much support from the writing for the above reason.

Bhascker again employs everyday style dialogue to make the characters sound more authentic. All of them speak urban Telangana, and much like in real life, when someone says something profound, it is countered by a joke. Perhaps it is because of this too-real take, that the dramatic turns stick out rather than complement the rest of the organic plot. Like when they find Shirley (Anisha Ambrose) in Goa and she absolutely rescues them from their homelessness, makes Vivek a French-toast and appoints herself as his unofficial therapist. But perhaps we are asking too much from a buddy flick that primarily wants to make us laugh.

The humour makes up for all the predictability of the plot and the occasional offhandedness in the proceedings. Vivek Sagar's music beautifully underlines the film's swings between optimism and eccentricity, the only two things the movie is keen on. The cinematography makes everything look rich, and you wish it were a little toned down in its "middle-class" parts. However, some shots are quite inventive.

This must be a very personal film for Tarun Bhascker, and it's clever that he chose to make it as a comedy. It is established that his strength is his sound understanding of the milieu he explores, but so far he has written about only what he has inhabited. His short Sainma is a very good movie rooted in nativity. While it would be interesting to see how he handles things outside his comfort zone, perhaps he should make something like Sainma on a big scale. We need such films.
Share. Save. Connect.
Tweet
EE NAGARANIKI EMAINDI SNAPSHOT 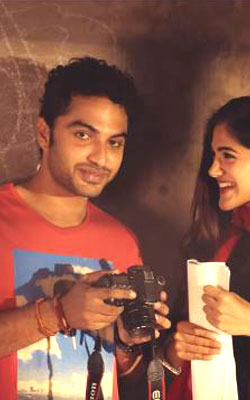 ADVERTISEMENT
This page was tagged for
e nagaraniki eaminde telugu movies
ee nagaraniki emaindi full movie
e nagaraniki emaindi full movie telugu
Ee Nagaraniki Emaindi telugu movie
Ee Nagaraniki Emaindi reviews
Follow @fullhyderabad
Follow fullhyd.com on
About Hyderabad
The Hyderabad Community
Improve fullhyd.com
More
Our Other Local Guides
Our other sites
© Copyright 1999-2009 LRR Technologies (Hyderabad), Pvt Ltd. All rights reserved. fullhyd, fullhyderabad, Welcome To The Neighbourhood are trademarks of LRR Technologies (Hyderabad) Pvt Ltd. The textual, graphic, audio and audiovisual material in this site is protected by copyright law. You may not copy, distribute, or use this material except as necessary for your personal, non-commercial use. Any trademarks are the properties of their respective owners. More on Hyderabad, India. Jobs in Hyderabad.